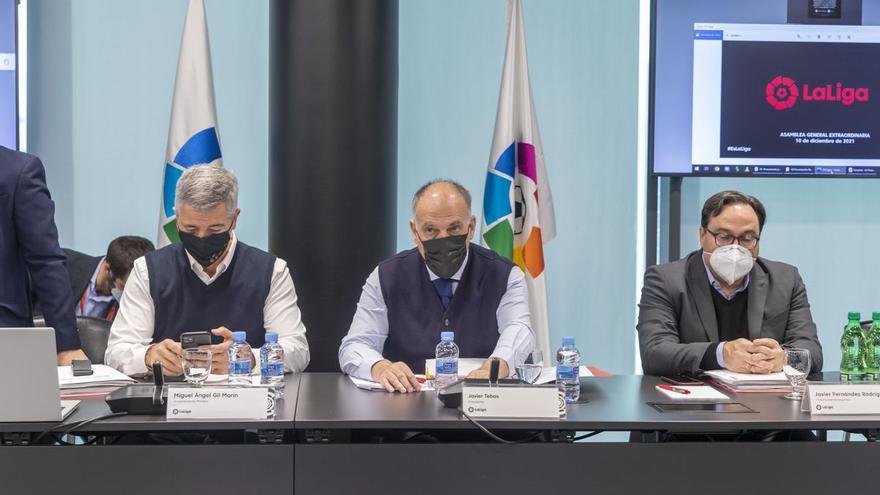 The Assembly of The league has approved this Friday with 37 votes in favor, four against and one abstention the agreement that will link the competition with the investment fund CVC for the next 50 years. As planned, Real Madrid, Barcelona Y Athletic have voted against an alliance that will involve an injection of 1,994 million euros for the rest of First and Second clubs. They have been joined by Ibiza, while the Oviedo has abstained. The rest of the clubs that initially ratified the agreement have remained in their position.

The pressure of the three historic clubs of the football Spanish and the Royal Spanish Football Federation (RFEF) for the agreement not to go ahead has not found support. His intention that the Higher Sports Council (CSD) intervened to cancel the Assembly was not fruitful either, since the Government declared itself not competent to act in that sense, relying on reports prepared by the State Attorney.

Following the agreement reached this Friday, CVC becomes an industrial partner of the main Spanish club competition through LaLiga Impulse, the society that from now on will exploit the rights of TV of the clubs. The investment fund has bought the 8.2% of this new company for half a century, in exchange for those 1,994 million euros. Later, LaLiga will be the one that lends that money to the clubs, depending on their weight in the audiovisual distribution.

15% of the total amount will be used to increase salary limits, another 15% to restructure debt and the remaining 70% will be linked to development projects of infrastructures, digitization Y communications. To access the money, clubs should submit projects and demonstrate how they will contribute to their increase, subjecting them to the evaluation of a commission that LaLiga will create in the near future and to a department of specific professionals of the entity.

CVC will also contribute its knowledge and experience in different sectors to promote the international development of the LaLiga product and of its clubs in particular, according to supporters of the project. That was one of the main virtues that stood out in the face of the counter offer in the form of credit presented by Madrid, Barça and Athletic in the last week, a proposal that has not received a single support from the rest of the entities.

From now on, a court battle ensues. The three clubs opposed to the agreement have already announced that they will take legal action considering that LaLiga Impulse It is a project that is outside the legality that governs Spanish football, a position shared by the RFEF. In this way, the all-out war that exists in Spanish football intensifies, with Javier Tebas leading a team that brings together 39 clubs and Florentino Pérez, in addition to Luis rubiales, leading the other.

The confrontation will intensify, as reported by EL PERIÓDICO DE ESPAÑA, a newspaper belonging to the same publishing group as this medium, when the LaLiga Delegate Commission approves the new audiovisual distribution rules, financially punishing Madrid and Barcelona, ​​once the rights are awarded. of television in Spain for the next five years. This same Monday the deadline for the submission of offers is closed and the provisional award of the different lots will be made.