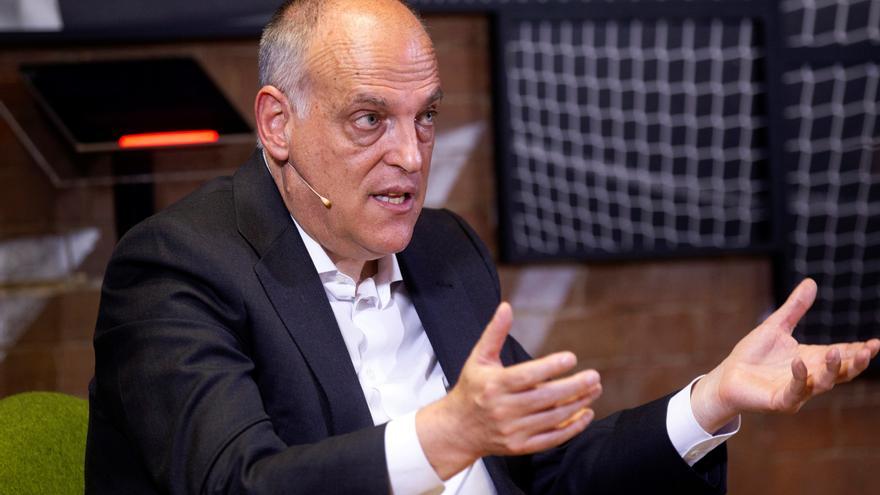 The league football prepares "a change of strategy" when configuring the upcoming audiovisual rights auction packages of the competition for the national market, as advanced by the president of the organization, Javier Tebas during the first 'EFE Sport Business Days' forum.

The club association is already preparing the new competition ('to tend') for the award of the audiovisual rights of the two main categories of Spanish football, at the national level, from the 2022-23 season.

The current contract, which covers until the end of the next 2021-22 campaign, generated 1,105 million euros in revenue in the 2019-20 season, slightly less than the 1,143 million of the 2018-19 due to the effect of the pandemic, to which are added 708.4 million for international rights, whose contests have other terms.

Despite the discounts that other European leagues have faced, such as the A series Italian -which has gone from receiving 973 million euros per season in the 2018-21 triennium to 927.5 million after its recent contest-, the president of LaLiga considers that they will be able to increase their income from the national television broadcast of their competitions.

"I am always optimistic, but what I have clear is that we are not going to grow in double digits, that has ended for a period of time. We live in a time when the crisis of the covid-19 and the transition between IPTV and the world of OTT can penalize. But I am optimistic, we match or grow, "he said during his participation in the 'EFE Sport Business Days' forum.

Asked if he could change the structure of the batches of matches offered in the contest -which in the previous period separated the 8 First Division matches for payment in one batch, the 'great match' for payment in another, and the match in open in another-, Thebes hinted "a change of strategy" in this sense.

"Yes, there is going to be a change in strategy when it comes to setting up the 'tender'. There are going to be many lots, very different, and in four different 'subtenders'. There can be as now, eight in payment, the great game and one in open; but there may be seven on one platform, three on another and three separate days, like what has Amazon In England. It's going to be different, "he said.

The American e-commerce giant Amazon has already made some purchases of audiovisual rights to European competitions: it bought the matches of the 'Boxing Day' (December 26) of the English Premier League, some batches of the Champions League in Germany and Italy, and recently took over the French first and second divisions for the next three seasons, after the departure of the Spanish group Mediapro.

"Amazon's entry into the French league is an issue to study, because it has broken the policy it had been doing. It has bought at bargain prices, at a low price compared to what the French league itself expected ", analyzed Thebes.

Regarding the international sale of its television rights, LaLiga recently announced an agreement with the US ESPN, owned by Disney, which may exhibit the championship in the USA until the 2028-29 season.

"This agreement places LaLiga in the most important operator of the sport in the United States. I would send a message, so that we see that when it says that it is going to leave Messi and the values ​​are going to fall: we have signed eight years, and we do not know if Messi will be there. What they know for sure is that it will not be there in eight years, nor do they know what players there will be in eight years. It is a message about how important LaLiga is, the competition and what the clubs have been able to create in these seven years, "Tebas stressed.

"How can we not exploit it?"

The association of Spanish professional football clubs launched three years ago 'LaLigaSportsTV', their television platform over the Internet (OTT) where they can watch from the Primera Iberdrola women's matches to the Sacyr Asobal handball League, the National Futsal League and many other sports; a tool whose president highlights the value of the data it provides.

"The OTT is a part, the 'Fantasy'is another part, the application is another, the games is another, many club applications ... The digital ecosystem consists that all the data, millions, are related, we know when a user sees the OTT, and it is at the same time Fantasy user, and how he navigates through our digital ecosystems, that allows us to make sponsorship strategies and push television audiences, "he said.

Tebas explained that its Internet television platform already has 1,700,000 registered users and it has served them for something "fundamental": to know" how the OTT world works ", a type of direct service to the consumer towards which the big companies of the leisure and audiovisual entertainment walk.

"Disney used to distribute its channel through 'telecos', now in Asia it has withdrawn from all of them, it wants to go directly to the consumer, which is what it does Netflix. That is happening in sport with DAZN. How a league like the Spanish one, which is close to 2,000 million euros of turnover in audiovisual rights, how is it not going to know this world perfectly, we would be irresponsible if we did not know it, "he argued.

For the president of LaLiga, taking that step to directly offer consumer services is "the future" of his entity. "If we have taken the step of selling tickets, selling rights to third parties, as we do not take this step our value will remain in a third party "he insisted.

Does Javier Tebas see a future in which the viewer of Spanish football instead of subscribing to a television operator subscribes directly to LaLiga to watch the matches? "Yes, it will take a while. We may take 5, 6 years, but the final customer model is going to happen. If soccer in Spain is more premium than Disney, why is this model good for Disney and bad for a property of leisure and entertainment that is greater than Disney in Spain? The model is good, what we will have to look for is if it will only be LaLiga, other sports ... That must be worked on, "concluded the president of LaLiga, the first guest of the forums 'EFE Sport Business Days'.