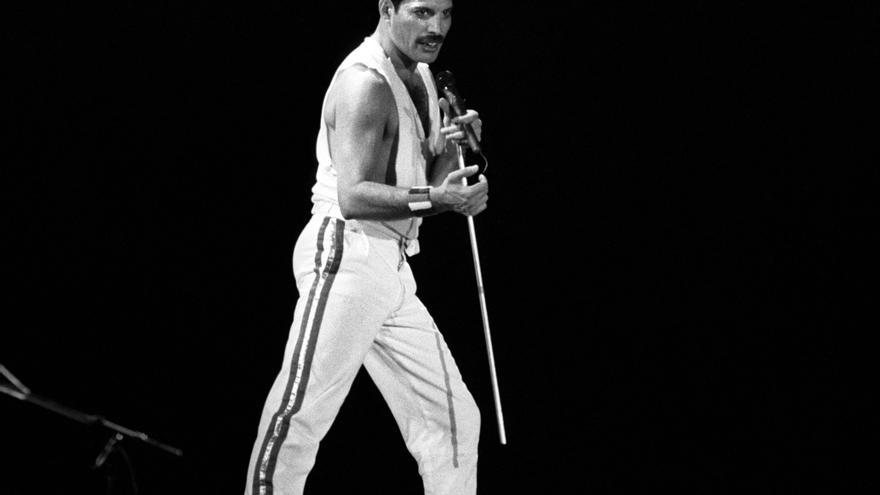 Just 24 hours after announcing that I was HIV positive, the life of Freddie Mercury, one of the greatest vocalists in rock history, was turned off by the amazement of a humanity that was beginning to know the devastating effects of the AIDS. Today, thirty years after his death, numerous fans paid tribute to him in front of what was his home in London.

It was 1991 and the ghost of AIDS had already left the marginal circles to become a disease that also attacked the rich and famous.

On November 7, legendary basketball player Magic Johnson, one of the most popular public figures of the 1980s, revealed at a press conference that he was a carrier of HIV. Little more than two weeks later, on the 23rd of that same month, Farrokh Bulsara, better known by his stage name Freddie Mercury, released a statement through his agent.

“After the enormous conjecture in the press during the last two weeks, I want to confirm that I have tested positive for HIV and that I have AIDS,” announced the singer, asking for respect for his private life.

Just a day later he passed away, at age 45, at his home in Logan Place., in the affluent London borough of South Kensington. Dozens of admirers of the Queen singer marched past this Wednesday.

“My birthday present is come to my Freddie’s house “, Sonia Olvera Villanueva told Efe the Mexican living in the Spanish city of Getafe.

For this woman, who became a follower of the vocalist as a result of the movie “Bohemian Rhapsody”, visiting Mercury’s last resting place is the “dream” and the “illusion” of your life.

“I came with my daughter, who has accompanied me from Getafe. I am a nurse, I work at night and I made changes to come here, I can’t believe it. Since I was on the corner I have cried with emotion, I have yelled, I My head hurts and I can’t believe I’m here at Freddie Mercury’s house, “Olvera said.

The woman recalled that she was working as a flight attendant the day the singer died: “I had just turned 24 and I remember that day perfectly, they told us and told us the news.”

Like her, the drip of followers What in it did not cease throughout the day. Coming from Birmingham, from abroad, from the British capital itself, those present left their memories in the form of photos, flowers or posters.

A young woman proudly showed her arm fully tattooed with the iconic image of the singer at the Wembley concert in 1986. Others preferred to make clear the message “We still love you” on a Polish flag, with the names of Sonia and Zbyszek.

If the last house of the leader of Queen has become his mausoleum, that is mainly due to a mystery, perhaps the great secret that remains to be solved about the life (or rather, death) of the versatile artist.

After his death, Mercury’s remains were cremated and his ex-partner Mary Austin (whom he called the “love of his life” in the song “Love of my life”) took them to a place that he has never made public.

In 2013, the riddle seemed to be solved. A small plaque found in Kensall Green Cemetery, west London, seemed to mark the place where his remains were deposited.

But only a few weeks after the British press reported that discovery, the plate disappeared, without being heard from again.

As Austin herself said in an interview, “he wanted it to be a secret and it will continue to be so.”