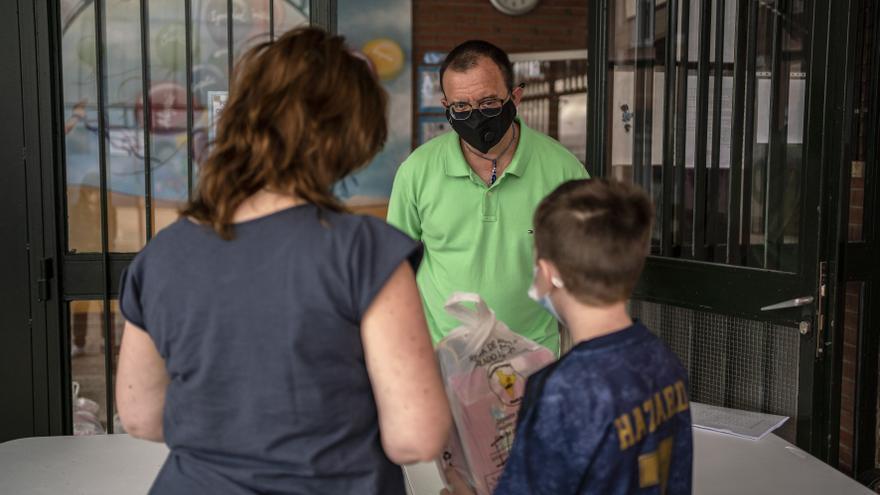 Insomnia, stress. (Almost) absolute availability to deal with problems. Use to work of personal computer equipment and, sometimes, spending on material for the teledocence. Teachers and professors have navigated the confinement due to the COVID-19 pandemic and distance learning as best they can, and they have done so without major complaints due to the exceptional situation and the little time that there was to prepare.

"It was a special situation due to the state of alarm, from one day to the next we stopped having a type of teaching and had to develop materials that were not prepared. Adapt. The teachers have put in an impressive number of hours, but you cannot be permanently pulling the goodwill of teachers "if the evolution of the pandemic forces to teach distance classes again (or if, directly, the communities propose that some subjects be done online to try to separate the students and keep the distance from security), says José Ramón Merino, head of educational policy for the STES union. The clamor runs through the teaching bodies, from Children to the University: 96% of teachers demand that telework be regulated, according to a UGT study.

Because currently there is no specific regulation that establishes the labor and material conditions in which the group must perform. "It is essential to have a remote work regulatory law that establishes the conditions, risks and guarantees that teleworking must have (given the shortcomings that have become apparent during the Covid-19 crisis)," requires a report. Recent CCOO on the matter.

The Ministry of Labor is preparing a draft bill that it wants to bring to Congress as soon as possible, but it is not clear that it will cover teachers, at least not officials: the project talks about "companies" and does not refer to Public administration, explain sources from the ministry, has announced a project, but little else is known at the moment.In other words: everything indicates that we will reach September without a telework law for teachers.

The situation may end up creating a problem, the unions warn. Many teachers have stated that they are not willing to pay a possible return out of pocket to distance education, as has happened so far. "Just as in the normal situation we have fixed the hours of class or attention to students, it should be for that possible eventuality," explains José Ramón Merino, head of educational policy for the STES union. "Hours, health conditions (there have been many cervical problems), workspaces and equipment would be other basic issues that should be regulated," he adds. What if it doesn't happen or, better said, when it doesn't happen, at least in time for the beginning of the course? "We consider that the beginning of the course can be problematic. There are other unions that have already called strikes for the return. It is for other reasons, but this can add discomfort among teachers," he replies.

Various reports by educational unions during the confinement have pointed out the consequences that working from home have had for teachers. A survey by the Unión Sindical Obrera (USO) reported that 86.9% of teachers have used their own technological tools to carry out their work, with the consequent increase in their usual expenses. Almost half of them (40.7%) have had to buy new computer equipment and accessories, in addition to expanding their internet contracts. The UGT study adds that almost seven out of ten teachers (69%) affirm that they have worked more hours than they were entitled to, which they calculate in two extra hours a day.

That in terms of working conditions. Regarding the affectation on the health of the teachers, USO, in data that is consistent with other reports such as that of the UGT, reveals that 71% of the teachers have habitually shown anxiety, irritability and nervousness; half (54%) expressed "excessive" concern about the situation and a similar percentage stated that they had not been able to find moments for leisure and rest: even if they were not strictly working, the possibility of an email from a student entering in trouble at any time raised days of almost 24 hours.

"In these circumstances, each email had to be cared for a lot. Because live a smile, a gesture, they soften a lot. But in writing you have to maximize the warmth of the contact. Each email takes time, it is not just putting homework or correcting. than always having the doors open ", explained Guadalupe Jover, a secondary school teacher in a center in Madrid.

150 million to give a computer to each teacher

A recent CCOO report that analyzes the situation of telework in the field Educational calculates that to provide a computer to each teacher - the minimum essential requirement from which to start to regulate distance learning, according to the union - would require an investment of at least 119,503,184 euros. In addition, adds the union, the educational administrations must make a renovation of the existing computer equipment, which would mean an additional item of at least 26,556,263 euros.

But computers are only the tip of the iceberg for CCOO. The union explains that they would also need: a uniform, secure and stable educational platform (educational cloud), which allows the connection of a large number of students and teachers for extended periods of time (a question not so minor depending on where: Educamadrid, the platform used by the Community of Madrid, collapsed in the first days of confinement to the despair of teachers, who could not even access their emails); an adequate and sufficient connection to carry out professional work; didactic, methodological and digital training to teach in digital environments; specific training in occupational health, psychosocial and ergonomic risks; and a flexible pedagogical project are the red lines that CCOO marks for regulation.

Merino, from STES, agrees and summarizes: "We have enough elements of our own in the profession to have our own regulations."

Furthermore, teachers demand that one of the fundamental issues they consider be addressed: the separation of work and leisure time and the right to digital disconnection. "The new reality that has been imposed in digital environments has blurred the educational times, well structured in a classroom hours," they explain at CCOO. "Aspects such as attending queries after hours, when attending other courses, tutorial action, attending families, etc., cannot be generalized under the premise of immediacy, which is one of the characteristic features of the digital world" , argues the union.

In this sense, the experts recall, both the Organic Law on Data Protection of 2018 and Royal Decree-Law 8/2019 refer to the right to the so-called "digital disconnection" of workers. "The educational administrations and the workers' representation must establish rules on the use of communication technologies that guarantee the right to rest and vacations," says CCOO, which proposes that mandatory rest periods be established for teachers.

A last aspect that worries teachers, and for which they have had little response, is data protection, a particularly sensitive issue when dealing with minors. When working from home with their home networks and with platforms sometimes different from the official ones because these did not work, many teachers have had doubts about possible breaches of the laws.

Diego Redondo, director of an adult education center, indignantly explained the slogans that the Data Protection Delegation had issued about the use of home networks to work: "If teachers decide to use their personal network for professional use [poca capacidad de elección tuvieron] they must adopt the necessary security measures so as not to jeopardize the security of data of third parties (...), because if they treat the data without these precautions they become the only ones responsible for the inappropriate use of the same. If they do not want or do not know how to apply said measures, they should refrain from using the personal network for professional purposes, "the Delegation replied to a query.

For teachers, this instruction, given in Madrid, is the digital equivalent of holding school directors accountable for hygiene and safety plans, as has been done in many regions. "It is to laugh in the face of the teachers", settled a Madrid teacher.