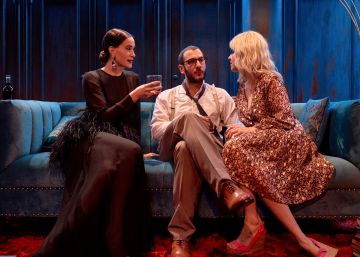 On that carpet of long red hair that covers a sober office in New York, but also a sophisticated hostess club or an elegant apartment in Paris, there is one of the most volcanic love and sex stories of the first half of the 20th century. The triangle formed by two heavyweights of literature, Henry Miller Y Anaïs Nin, and the one who was Miller’s wife and prostitute June Mansfield has left a long trail of esitos to which the play is now added Taxi Girl. Written by María Velasco and directed by Javier Giner, the assembly is a happy shout in favor of the freedom to love that is represented at the María Guerrero Theater in Madrid, until March 15, with Celia Freijeiro (Anaïs Nin), Eva Llorah (June Mansfield) and Carlos Troya (Henry Miller).

Taxi Girl It tells the relationship of the trio between 1923 and 1957, based on newspapers, novels and testimonies, but the work does not present the facts in chronological order. Located in a timeless frame, it is the portrait of the solitude of the characters and of some free women and insumisas that, as the director points out, is not that they were ahead of their time, but that they are “even ours”. Javier Giner, known in the world of cinema as head of the press of Pedro Almodóvar and Penelope Cruz, debuts with this montage as a theater director. “Reading the text reminded me of Tennessee Williams. I recognized the courage and courage of María Velasco, ”he explained after an essay last week.

And how do you love? That is the question that Giner wants to ask the viewer. He has tried to bring Miller, Nin and Mansfield to present a contemporary reflection on feminism, literary creation, abuse, prostitution, the relationship between a man and a woman or homosexual love. “Do we love from the wound or from freedom? What price are we willing to pay for being free in a world obsessed with morals? ”He asks.

The director focused the montage with the firm decision not to be moralistic, or pacato – it is a function that does not hide the nudes or sexual games of these three lovers – but Giner has taken special care not to fall into obscenity on stage . “The issue of sex was one of the great challenges. I have thought a lot about it, because there is a fine line between being stark and being unpleasant. We try to be honest with what we are counting on without offering free sex, looking for elegance. It’s a story without taboos and the only way to take it to a stage was by taking my own taboos as a director, ”he explained.

“I use very sober and clean images, with a direct message”