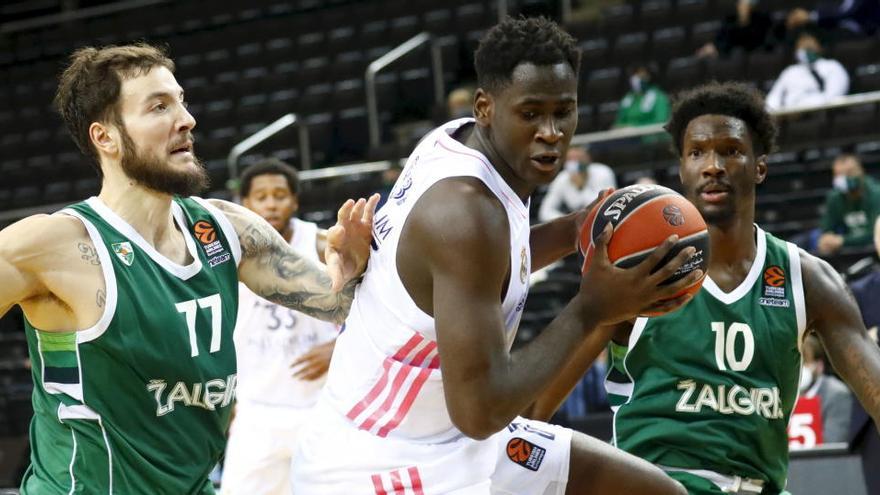 The exhibitions of Walter Tavares and Facundo Campazzo they allowed the Real Madrid add this Friday a valuable victory in Kaunas, the first at home in the Euroleague from basketball, against a Zalgiris who reached the seventh day as the leader and, after dominating for many minutes, ended up giving up after a final 10-0 set in which the Cape Verdean was the main protagonist (90-93).

In the 21 minutes he was on the track, the center scored 22 points, grabbed 12 rebounds and added a 34 credit rating. His dominance under hoops was accompanied by the good work, one more day, of the Argentine Facundo Campazzo (19 points, 3 rebounds and 10 assists and a PIR of 27). Both led Whites’ third win on the revelation team’s track, where they have won seven of their last eight visits.

Pablo Laso’s men started better thanks to their more choral game and the good wrist of Jaycee Carroll, which allowed them to dominate from the beginning a game in which the Lithuanians only responded with the three-pointers by Thomas Walkup, so Martin Schiller was forced to request time out ahead of schedule to reorganize his team’s game (11-18, min 5.30).

Whites’ greater fluidity in attack He kept him comfortable on the scoreboard. Carroll contributed eleven points in the first ten minutes, the same as an outstanding Campazzo, who hit three triples and distributed four assists in a first act of clear visitor color (24-32 min 10).

In the resumption the panorama changed radically. The defenses were adjusted, especially the Lithuanian, which halted the offensive production of a Real Madrid that, with only two points converted in six minutes, saw Zagiris take the lead taking advantage of Campazzo’s break and the pájara of his opponent, who could not find the formula to continue adding.

A partial 15-2 against, culminated with a new triple by Walkup, set off the alarms of a Real Madrid that he saw his advantage vanish and his rival threatened to escape, led by a Marius Grigonis who went from less to more. Then Sergio Llull appeared, who came to the rescue with seven quick points that balanced the fight again, until a pair of final triples increased the Lithuanian advantage at halftime to six (54-48, min 20).

The success from the perimeter of the premises in the first twenty minutes, with eight triples converted from twelve attempts (66.7%) and the contribution of Walkup (14 points – including four triples – four rebounds and six assists), contrasted with the benefits of a Real Madrid that started strong under the guidance of Carroll and Campazzo but offered a very different image in a second quarter in which they conceded a partial against 30-16.

At the restart, Real Madrid was still without carburetion. Several shooting errors and some losses allowed the Lithuanian champion to open an eleven-point gap and, to add insult to injury, Tavares took the third foul with many minutes to go. Pablo Laso decided to keep him on track and the Cape Verdean pivot thanked him with more baskets and rebounds, being able to reach the last quarter with double digits (14 points and 11 rebounds) and a PIR of 24.

In the last ten minutes there was an advantage in favor of the Baltic team (73-67) who deactivated Trey Thompkins in the first attacks with two consecutive triples, his only baskets of the afternoon. A new game started and the alternatives on the scoreboard followed one another, without a clear dominator on the track of the Zalgirio Arena.

Zalgiris threatened to escape after a triple by Hayes 2.52 from the end (86-81), but Real Madrid responded in time with a 10-0 run, with eight points from Tavares, which was decisive for the whites to add their third European victory of the season.

Incidents: match corresponding to the seventh day of the Euroleague played at the Zalgirio Arena in Kaunas (Lithuania) before about 240 spectators.

Spain overwhelms Romania and qualifies for the Eurobasket

Atlético, forced to react against Bayern