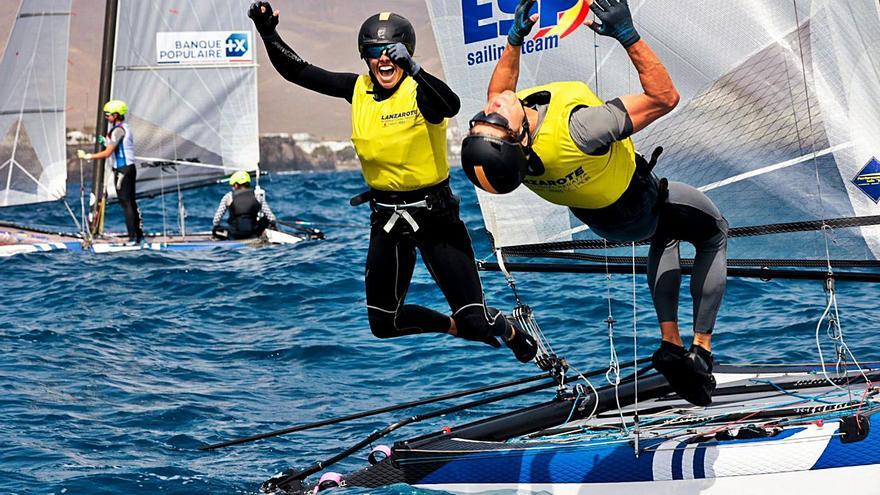 The rabbit event was the last international event before this team traveled to Enoshima to play the opening championship for the Tokyo Games. And they leave the island leaving the Spanish flag high up with two golds and a bronze in the Canarian event. Excellent results that give a good account of the high potential of our athletes, clearly indicating the high chances of the national team medal at the Games.

The fleet took to the water yesterday with a program that contemplated the celebration of a last fleet regatta for all participants and the Medal Races, final test with the top 10 of the classification of each of the classes. The activity thus arrived earlier than was accustomed to a regatta course that was dressed with choppy seas and winds of between 14 and 16 knots.

Far from loosening up with the certainty of victory in 49er, Diego Botín and Iago López-Marra proved one more day to be worthy of victory, closing their markers with a third and an eighth, and no less than 39 points ahead of the second, the Danes Warrer and Pretch-Jensen. They could only get 10 points from the Irish Dickson and Waddilove, who were leaders on the first day and say goodbye with a first in the Medal Race.

The rising wind left the Nacra 17 without the possibility of contesting the Medal Race, closing the classifications with the last fleet race, 16 of the program, in which Tara Pacheco and Florian Trittel were third. They achieved a 13-point difference with the Germans Kohlhoff and Stuhlemmer, which made clear the slim margin of possibilities to snatch the gold from the Spanish, even more remote for the French Delapierre and Audinet who were third with 42 points.

In yesterday’s regatta, a brutal collision between the Spanish and Swedish duo left both boats out of the game. Even so, the favorite couple got a repair, thanks to which they kept the first place.

After a difficult championship in which Támara Echegoyen and Paula Barceló have demonstrated their maturity as sailors and their ability to successfully overcome the setbacks of the sail, the Galician-Balearic crew faced the last day from fifth place in the 49er FX classification . At this fifth place of the fifth and penultimate day, the Spanish arrived after starting the championship in sixth position of the provisional and continuing with a 16-9-9. Capable of everything, the world champions tuned weapons with a fifth place in the last fleet regatta and finished by winning the Medal Race, which took them to the third step of the podium.

From the Canary Islands to Tokyo. Ireland has achieved the Olympic place in the 49er modality, followed by Belgium in the women’s 49er FX class, while Finland literally flies to get the Nacra 17 pass. With these results, six days of passionate competition in this Lanzarote came to an end International Regatta.

Tara, grateful for the support

Tara Pacheco showed her satisfaction not only as a winner, but as a member of a winning team. “I want to thank the Spanish Sailing Federation for the great and important work and support we have received in the last year and a half. It has been very important for us and he has done a great job with the national Olympic team ”, pointed out the sailor from Gran Canaria after winning in Lanzarote. For his part, for his teammate Florian Trittel, the objective has been achieved and the good taste in his mouth after the championship is complete: “We were not able to compete in the Medal Race because the conditions have become very ugly. In the regatta prior to the final we were approached and we suffered a collision that caused the rudder lift to fly off and disappear, but we have recovered ”. | VP

Cantero y Mas, without podium in the European 470

Neymar reaches an agreement with PSG to renew until 2026