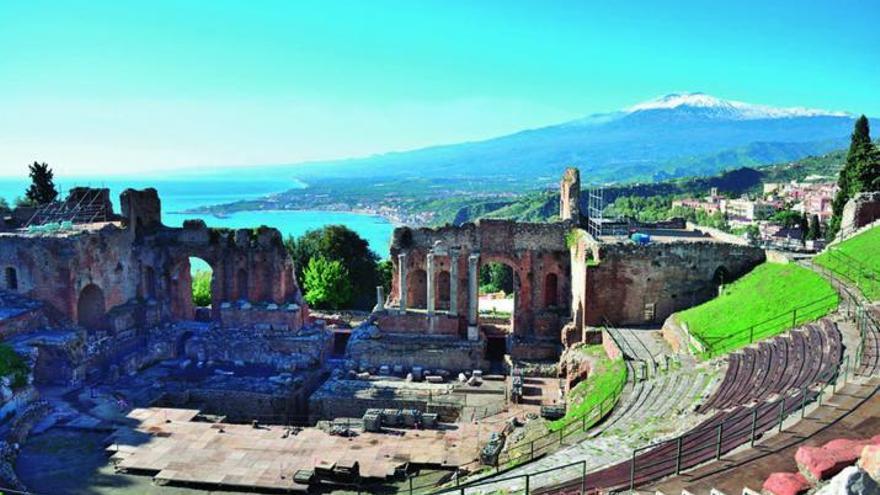 Back in Taormina my feet hurt. It was only a couple of hours that we had arrived in town. Perched on a cliff, the white houses towered over the sun and sea. Behind, Etna was covered in a thick cloud that made it difficult to see the top. We had been to the summit that very morning. The forecasts were good. We had arranged with Rosario, the alpine guide, a route to the very crater of the volcano. Rosario was a serious guy, with an iron face and a dark complexion. Her words, sparse, contained the information necessary for subsistence up there. They had lent us some special walking sticks and boots at base camp. The journey began on the funicular to the first camp. There we began to climb slowly on foot. As we turn around and leave the volcano behind us, we contemplate the sea. Taormina was a tiny point confused with the clouds.

Ascending a volcano has a point of mysticism. And much more if it is the abode of some god. The ancients had it clear. There resided the Greek Hephaestus or the Latin Vulcan. The divinity hammered the red-hot steel as he waited for his wife, Aphrodite, who was serenading Ares. But there are places much more peaceful than the intestines of a volcano. That summer’s tour of Sicily consisted of touring the coastline between Syracuse and Taormina. The most Greek of the Italian routes. Magna Grecia in its purest form.

Syracuse was an island long ago.

It was called Ortigia, which today is its historic center. The traveler walks in this millennium confusing the temples and the religions they serve. Next to the Greek theater, with its exquisite acoustics, there are baroque churches with an unmistakable Spanish stamp. Both testimonies have defeated the earthquakes, so common in the area. But the religion that is most practiced is the cult of the sea. In Syracuse you don’t need the beach to inspire swimming. The promenade that surrounds the city, forming a peninsula, is filled with young people who jump into the void. Foam and sun. Like a small Egypt, in the place papyrus was planted in which Plato would expose his ideal Republic of slaves and privileged.

A couple of days are enough in Syracuse. Continuing north, Etna was materializing on the horizon. At first like a shadow soaked in the sun, but at the height of Catania already like a dangerous mass. Catania is the second largest city in all of Sicily and could be considered a direct daughter of the volcano. Its palaces and churches are made of porous and black stone. Its squares have the physiognomy of dry lava and the saltpeter from the sea punishes the colorful buildings. The city is chaotic, like the entire region, but if the traveler visits it, they should understand that dirt is as much a part of its history as it is of its idiosyncrasy. The fishmongers display their products in the squares, outdoors, and the smell takes the pulse of the streets when the sun warms the umbrellas. There is no possible shade in a city so hot, that sleeps with one eye open in case the volcano decides to wake up. It does so from time to time, without reaching the tragedy of neighboring Messina, which was destroyed in 1908, killing almost 200,000 people.

There are, therefore, reasons to be careful when walking on Etna.

Rosario showed us where to put our foot. We had very little left to reach the crater. No human weakness before the god of fire. The smell of sulfur was strong. White smoke rose from the pit. The guide pointed out that, unlike other volcanoes, Etna did not have a crater covered with earth, but was open. A fall to the very depths of the earth. From the heights, the tip of the Italian peninsula was appreciated. Reggio Calabria and Messina, almost united. To the north, the Aeolian Islands, with its Stromboli volcano, more pyrotechnic but less dangerous. To the south, Rosario said that you could see Africa on clear days, but this was not. Too hot We stayed a few minutes contemplating the void, with the ground on which we stepped trembling briefly, until Rosario ended the expedition. Exposure to sulfur for too long can be fatal. The descent was less difficult than the ascent.

On the slopes of the volcano, life changes. In Piazza IX Aprile the waiter served us a couple of Martinis. It was almost lunchtime and we had ordered pasta e vongole with a slight garlic flavor. Taormina is the opposite of Etna. In its streets of flowery pots and panoramic to the sea it is celebrated to life. Decades ago, it was the place chosen by movie stars to spend their vacations. Today tourists try to emulate the dolce vita of aperitifs and baths in turquoise waters. But only those who have walked through the crater of Etna know the exact physiognomy of hedonism. The Mediterranean has millennia of fire and water. Taormina was born at that intermediate point.