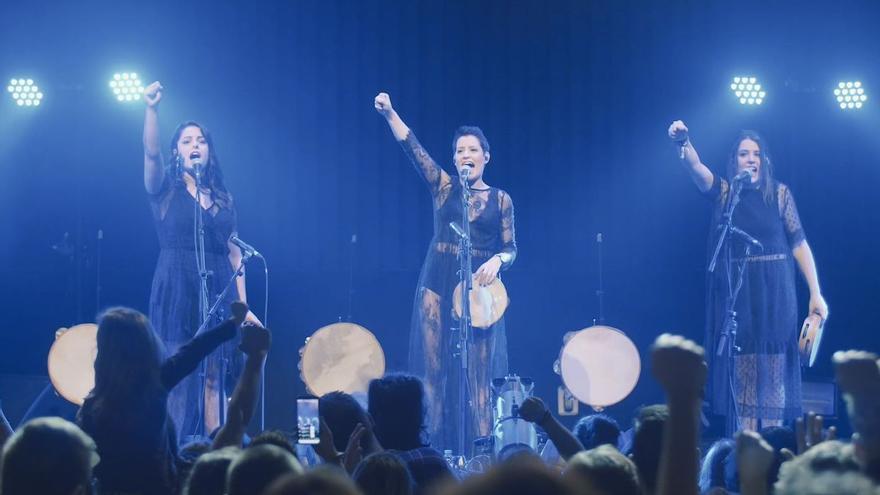 Tanxugueiras reports that he will perform this Wednesday at the first of the two semifinals of the Benidorm Fest (10:40 p.m. at Palau L'illa) after two of its components, Aida Tarrío and Olaia Maneiro, recovered from COVID.

In a statement, the formation indicates that Sabela Maneiro, Aida Tarrio and Olaia Maneiro will be able to act in this festival in which the participant of Spain at Eurovision 2022. There, they will present their live performance of 'Terra', which accumulates more than four million reproductions on digital platforms.

Thus, most of the team is already in benidorm to do the first tests for acting. On the afternoon of this Monday a dress rehearsal will be held, in which they will participate Sabela Maneiro and Aida Tarrio --who arrives in this day to the town of Alicante--. They will be added in the next few hours Olaia Maneiro.

Throught social media, Tanxugueiras explained that the two infected singers they are "fine" and "recovering." They are "looking forward to being able to share" their song with the entire public, 'Earth', "Live".

"We are very grateful for all the love from the eurofans and the public. We are accompanied by a fantastic team and we hope to give back to the people with our direct show all the energy that they are transmitting to us," they point out in a statement.

Laura Iturralde, Marta Verde, Fran Sieira, Iago Pico, Silvia Iria Miramontes, Jorge de Álvarez and Miguel Bling complete the team that accompanies the 'pandeireteiras' in this show that "conjugates the traditional with the contemporary in all its elements".

The show is directed by the set designer Laura Iturralde ('Ósmose', with Mercedes Peón) and the general coordination of PlayPlan Cultural, which is also in charge of production.

The dance teacher Silvia Iria Miramontes will coordinate the movements of Tanxugueiras and the choreographer and dancer Fran Sieira is responsible for designing the dance on stage.

The musician and producer Iago Pico (responsible for Pouland Studios and co-author, with Tanxugueiras, from 'Terra') will handle the electronic percussion.

The costumes are the work of Ourense designer Jorge de Álvarez (finalist in the National Fashion Awards in 2021), while the makeup will be a proposal by Miguel Bling (director of the 'You Glow Salon' and regular team in the 'Gen Playz' programs and 'Sweet and Salty').

Finally, the show is completed with audiovisuals of the visual artist and creative Galician Marta Verde (professor at the Berklee College of Music in Valencia).

In any case, the benidorm fest has designed three possible scenarios in case the interpreters cannot perform live after testing positive for covid.

The first of them is if the artist tests positive after carrying out the first test, something that is not applicable to Tanxugueiras since the first rehearsals begin this Monday.

The second scenario would also not be possible for the Galician group since it would consist of putting the video clip of the song as a participation. However, Terra does not have a published video clip.

The third scenario, therefore, would be the one applicable to the artists and in it "RTVE would make a montage with the song and images of the artist that it has", as explained by the benidorm fest in his web page.

In addition, the festival explains on its website that the head of the delegation, Eva Mora, explained in a press conference prior to the benidorm fest that "due to the health crisis caused by the coronavirus, it has been impossible to record reserve performances".