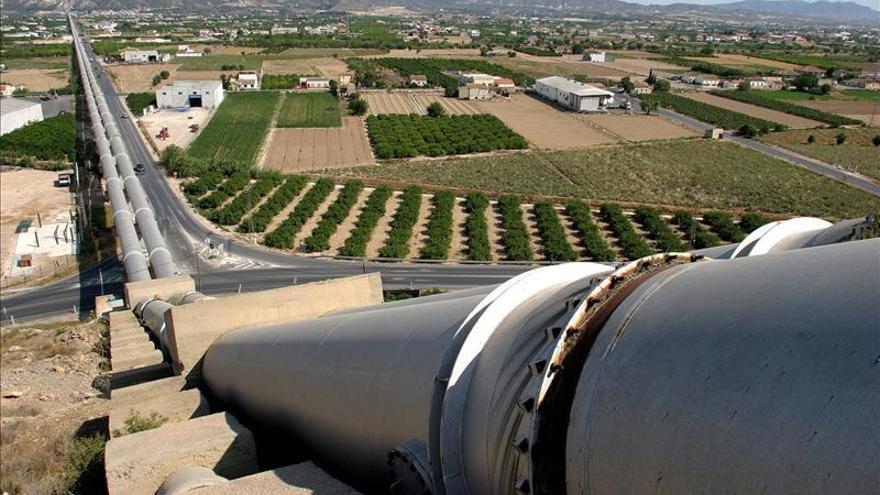 The Government’s project for the Tajo-Segura transfer to be in an “exceptional situation” for less time due to its low water level has raised up the irrigators of Murcia, Alicante and Almería. And, in its wake, the proclamations of the regional executives have followed one another. The new formula is based on sending more flow times automatically, without the need for authorization from the Ministry of Ecological Transition, in exchange for sending less liquid monthly.

“The Ministry will have before us in the legal battle and on the street with everything we have.” The phrase is from the president of the Scrats irrigation union, Lucas Jiménez, pronounced just after leaving a meeting with the fourth vice president of the Government, Teresa Ribera, on June 3. Just a few days earlier, on May 24, Jiménez had already led a demonstration next to the headquarters of the Ecological Transition. There he was accompanied by an escort of Murcian and Alicante politicians.

The reality is that the system that feeds the aqueduct is in this “exceptional situation” due to the amount of water available in the head reservoirs. half of your uptime. In these circumstances, the shipment of water to the east requires a permit from the fourth vice president Ribera, with a maximum limit of 20 cubic hectometres (hm3) per month. The new model calculated by the Center for Studies and Experimentation of Public Works (CEDEX) It implies that, if the system is in good condition, 27 hm3 are automatically transferred instead of the current 38 so that there are fewer months of discretionary shipments. The calculations say that the average annual transfer with this formula will be 326 hm3. It is almost the same as the average sent since the transfer started (which is 328 hm3), but 4% lower than the current rules of use (established in 2014): 339 hm3. That is the spark for a new water war. The president of the Coordinator of Farmers and Livestock Organizations COAG-Murcia, Miguel Padilla, insists to elDiario.es that “when a cut is made, it does not benefit us” and adds that the new formula “does not obey anything logical neither technical nor does it favor the surplus basin. “

However, the new rule is based on an analysis by CEDEX that has verified that, currently, the probability that the system is at the worst levels is 49%: “The transfer is in exceptional condition half the time, (… ) unacceptable from the point of view of a regular and stable exploitation “, explains CEDEX. Reviewing the monthly reports of the system, it can be seen that, of the 80 months that have elapsed since the method that is now going to be changed was established (2014), 43 have been exceptional and in another 11 there has been no possibility of transferring. Only 26 months have allowed automatic transfer (none of them at the most positive level).

This work explains that the bases for this panorama were created in 2014 by establishing the amount of water that is pumped when the transfer is at level II reserves: the technical guidelines that marked 30 hm3 as a volume that is automatically remitted were disregarded and it was decided to admit 38 hm3, “an inadequate starting figure”. As “an unfavorable hydrological evolution in recent years” occurs, “a high occurrence of exceptional situations” is taking place.

However, the Union of Llauradors and Ramaders of the Valencian Community speaks of a “very dirty move” and qualifies as “a real outrage” the plans of the Executive. And, once again, they appeal to “se It seriously compromises the future “of agriculture in the Alicante regions of Vega Baja and Vinalopó.” The future of 30,000 families who in one way or another live from the transfer water to irrigate their fields is at stake, “they repeat.

What happens is that almost 300 kilometers of pipelines further north, in the upper Tagus basin, water is increasingly scarce. The aPortions that reach the headwater reservoirs from which the water comes out –Entrepeñas and Buendía, in Castilla La Mancha– have fallen in the last decade. The average between 1980 and 2012 was 760 hm3. Since then, bad years have followed. The average between 2013 and 2019 is 655 hm3 (14% lower), which leaves a total average of 741 hm3.

The 22 riverside municipalities of Cuenca and Guadalajara that depend on these reservoirs see the review of the transfer as a “unique opportunity”. They demand that more water be kept in a stable way in their area (“40% of the capacity of the reservoirs”) while they believe that the transfer sends water “systematically” even “when there is no need” in the lift.

A study by the Tagus Research Group of the University of Castilla-La Mancha has verified how, since the aqueduct that feeds Alicante, Murcia and part of Almería was put into operation, the population of the riverside towns has been collapsing as the economic resources that had been created around the swamps with the so-called Sea of ​​Castile. The work concludes that “The needs of the Spanish southeast have been prioritized over the local ones”, which has caused “its population and socioeconomic decline.”

“This measure, in itself, seems adequate as an adaptive response to the new context imposed by climate change, but I believe that pedagogy is lacking to complete the story: water management is conflict management, and if the modification of these rules is limits to changing the levels and volumes of the resource falls short because that is very technical “, analyzes Gonzalo de la Cámara, coordinator of the Department of Water Economics at the IMDEA Institute. “It takes something more, to do politics, to bring together the positions of the winners and losers of this measure.”

Of course, the boom of the fruit and vegetable industry in Alicante and the Region of Murcia is evident. But the data varies depending on who offers it. The Murcian government attributes to all this sector a turnover of 3,000 million euros per year. Just the same figure as the Sindicato de Regantes del Trasvase SCRATS is reserved only for the crops of the Tajo-Segura. Both Murcia and Alicante grant themselves the title of the garden of Europe for their exports.

In any case, not the entire sector depends on this infrastructure: the area that, legally, can be irrigated with water from the aqueduct is assessed: in Murcia there are 82,800 hectares (ha), according to the Irrigation Zones document of the Segura Hydrographic Confederation. That is, 46% of the 179,600 hectares dedicated to irrigation in the region, according to statistics from the Ministry of Agriculture. In Alicante there are 49,700 out of 82,300 total ha, 60%. In Almería there are 3,000 irrigable hectares with resources from the transfer of the 70,000 dedicated to irrigation (more than half under greenhouse).

To this situation has been added the effect of the climate crisis. The forecasts already made in 2017 by Cedex, the Spanish Office for Climate Change and the State Meteorological Agency indicated that global warming “could mean, on average, a reduction in water resources for the Tagus river basin, which would be comprised between 3% and 8% for the period 2010-2040 “. In fact, at the head of the Tagus, the calculated impact is a little more severe, which implies less water to pump from.

The irrigators demand “stable supplies of water to be able to regulate its use and modify the irrigation of the different agricultural campaigns”, explains the president of the Agrarian Association of Young Murcian Farmers, Alfonso Gálvez, who believes that in the end it is a matter of reducing flows sent to go, finally, to a “drastic reduction and practically stop the shipment of water for supply, with an increase that, clearly, will be unaffordable by the families and by the irrigators themselves because the background of all this is that it is intended a substitution of transfer water for desalinated water “.

In contrast to this analysis, in 2015, the Government of the Popular Party introduced a transitory provision to its modification of the Montes law which already envisaged modifying the rules of the Tajo-Segura transfer “with the sole objective of providing greater interannual stability to supplies, minimizing the occurrence of exceptional hydrological situations.” Even so, Gálvez insists that using the decree is a “totally wrong option” because it “breaks the consensus on water.”

De la Cámara, IMDEA, points out that, at the same time that the operation of the transfer is being retouched, “it is necessary to explain what the alternatives are.” The expert in water economics considers that this option involves “increasing agricultural efficiency, increasing water regeneration and diversifying the supply with desalinated water.” And he adds that the situation would improve with “adequate incentives for irrigators.” In this sense, he explains that it is much cheaper to extract water from a well than to put the liquid on the farm from a desalination plant: “These plants do not find demand because they do not have the appropriate incentives.”

In the wake of agricultural demands, regional political leaders have been placed. It has been enough with roll call at the demonstration in front of the Ministry headquarters a few weeks ago.

The president of the Region of Murcia, Fernando López Miras (PP) then declared that there is an “inadmissible roadmap of the Government of Pedro Sánchez to close the Tajo-Segura”, although this possible modification speaks of something else. The general secretary of the PP, Teodoro García Egea – originally from Murcia – took the opportunity to declare that it was “an honor” to be with the farmers, “who get up very early so that the Spanish have food on their table.” The Deputy Mayor of Cartagena, Noelia Arroyo, threatened that “families are going to see how the price of the water bill increases by more than 30%.”

However, the Government of the Valencian Community, made up of the PSOE, Compromís and Unidas Podemos, has not been able to escape from this trend either. they consider the transfer “inalienable”. “It is a very complex situation that we want to address through dialogue,” explained President Ximo Puig, for whom it is “absolutely necessary” to maintain the transfer. Furthermore, lMinister of Agriculture, Rural Development, Climate Emergency and Ecological Transition, Mireia Mollà (Compromís), who accompanied Alicante farmers in their demands in Madrid on May 23, praised the current system: “It is technically endorsed and rationalized, it complies with environmental and socioeconomic values ​​in an essential sector.” The regional secretary of Agriculture, Roger Llanes, has said that the Valencian Generalitat is prepared to defend it “with all the means at our disposal.”