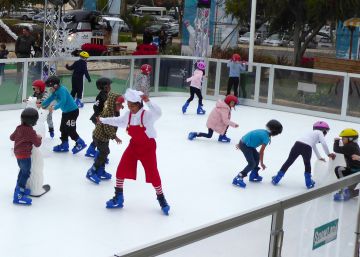 It’s so weird that snow on Seville that the last time he dyed the city whiteIn February 1954, there had to be a perfect weather plot. Despite this context – or, perhaps, precisely because of it – an entrepreneur had the idea of ​​selling synthetic and cheap ice rinks around the world. The exceptional thing is that it has worked out so well that, in just three years, it has gone from billing 200,000 euros to the million – 245% more – with which it intends to close this 2019.

Álvaro Falcón is the 36-year-old Andalusian entrepreneur who hides behind Unreal Ice, the company that has already managed to be present in 25 countries in Asia, America, Europe and Africa. And he has achieved it from the Sevillian towns of Tomares, first, and Santiponce, where he now has the headquarters of a company he founded in 2017. Even that is not the most peculiar thing in a business that has only two workers, Falcon himself and his wife, Marta Toscano, lawyer and partner.

The success of Falcón and Toscano is not casual and fortuitous. The businessman knew the leisure industry and was for years commercial director of Xtra Ice, a Sevillian company also dedicated to synthetic ice. The entrepreneur started to create in 2013 Unreal Island for the commercialization of inflatable water parks that he keeps active. It was three years ago when the entrepreneur made the leap to compete directly in the same market of the company he worked for.

The firm began with a clear idea, 300,000 euros of investment and an effort that, to a large extent, was to detect those markets in which the synthetic ice rinks were about to be discovered. This was followed by a strong presence in the network and important positioning campaigns, as the businessman recalls. “Only 8% of our clients have seen us. The majority make a leap of faith when they find us on the web,” Falcón acknowledges.

Without its own factory, another key was to find a list of reliable suppliers that could materialize their creations. This is how they have found a portfolio of 50 manufacturers, each specialized in the specific elements that make up a track. “We wanted the product to be 100% European. 80% of the components are produced in Spain, Italy and Sweden,” explains Falcón. It is they who supply the self-lubricated thermoplastic with which the installations of what is known as synthetic ice are mounted.

The creation takes years of development and improvement, it is ecological because it does not spend energy to keep the track cold and has low maintenance costs. “The first ones were invented 25 years ago in Canada and they were wooden and plastic sheets. When they arrived in Spain, the heat variations caused them to deform, “summarizes the businessman.

The low fixed cost burden has allowed Falcón and Toscano to lower the sale price of their tracks by around 25% compared to their competitors. About 200 square meters of one of its facilities has a cost of 48,000 euros turnkey and “even with skates”, explains the head of the company. The reduced cost has been key to dazzle shopping centers and leisure companies, its main buyers. Falcón sums up his maxim: “The cheaper, the happier the customer is.”

With Christmas In progress, they are complicated weeks in the company. A few days ago Falcon returned from Singapore, where he has supervised the installation of his last track. He has also been to Uzbekistan, where he sold another 1,000 square meters to a town hall. The portfolio of countries is completed by Thailand, Panama or Japan. With them, their turnover has grown exponentially, which they estimate will reach one million euros this year. Of its sales, 40% are benefits that entrepreneurs decide to reinvest in the company.

And Unreal Ice does not plan to stop its growth. The company already offers alternatives of leisure on ice, such as cars on road crashes, snowballs as a photocall or augmented reality games. In addition, the company is expanding its portfolio of distributors – now they are already present in Panama and the United States – and, in addition to sales, it plans to address the rental business