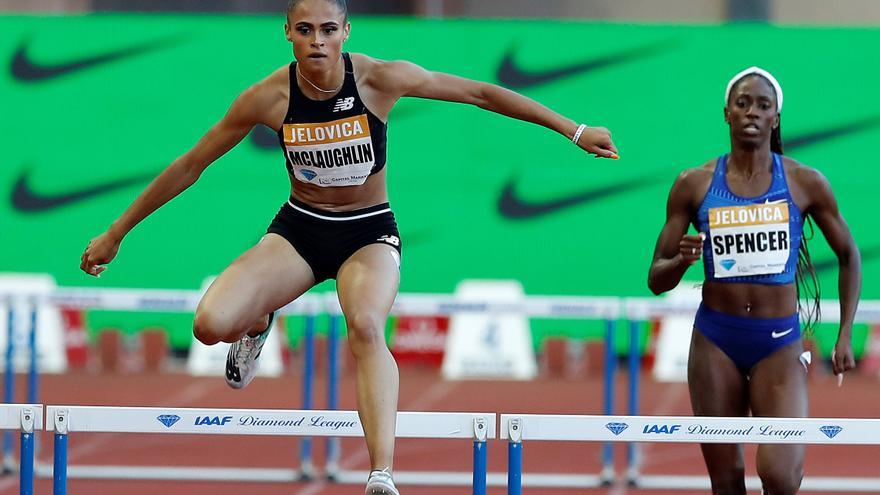 The Olympic Qualification Trials of Athletics in outdoor track of USA finished this Sunday night at Hayward Field with a new world record, set by Sidney McLaughlin in the women’s 400m hurdles with a mark of 51.90, after a delay of about five hours due to the extreme heat that reigned throughout the morning.

A heat wave hit the entire state of Oregon this weekend, raising the temperature in Hayward Field to 42 degree before the officials chose around 15:15 on Sunday to suspend the competition until 20:30. At that time, six event finals had not yet been played: men’s long jump, 800 meters of the heptathlon, 400 meters hurdles for women, 800 meters for women, 1,500 meters for men and 200 meters for men.

It would precisely be in the final of the 400 meters hurdles in which the figure of McLaughlin emerged, which surpassed Dalilah Muhammad in the final stretch to score 51.90 seconds and set a new world record. Muhammad, who finished second with 52.42, held the world record with 52.16 since October 2019. Anna Cockrell was third with 53.70, beating Shamier Little (53.85).

There was no surprise in the men’s high jump final It was taken by JuVaughn Harrison when he broke the bar at 2.33 meters, as did Darryl Sullivan, but made more mistakes. While the third classified for Tokyo 2020 was Shelby McEwen, who passed 2.30 meters.

Harrison himself then competed in the long jump final and was also champion with a record of 8.47 meters – his personal best -, which he set on his third attempt. Then there would be Marquis Dendy with his 8.38 meter jump, achieved on his second attempt, and Steffin McCarter ranked third with a record of 8.26, which he achieved on the third attempt.

The men’s 1,500 meter final went to Oregon Ducks star Cole Hocker, who attacked down the stretch to overtake Olympic champion Matthew Centrowitz near the finish line and set a time of 3 minutes 35.28 seconds. Centrowitz, who was surprised by Hocker’s final strength, finished second with 3: 35.34 and Yared Nuguse managed to enter third (3: 36.19) which also earned him the pass for Tokyo 2020.

In the final of the men’s 200 meters, Noah Lyles set a world-leading time of 19.74 in another tight arrival at the finish line, the winner was defined by the fact that he was always the most relaxed on the track. Kenny Bednarek came in second with a personal best of 19.78 and 17-year-old Erriyon Knighton achieved the dream of being in his first Olympic Games by doing a time of 19.84 seconds.

After McLaughlin’s great triumph in the 400 meter hurdles, the final of the women’s 800 meters had Athing Mu as the winner by setting a time of one minute, 56.07 seconds, competition record and personal best. Raevyn Rogers, did his best job in the final stretch of the race and was rewarded with second place with a record of 1: 57.66, which earned him a new personal best. Ajee ‘Wilson will join Mu and Rogers on the Olympic team after he crossed the finish line third and a time of 1: 58.39.

Annie Kunz won the heptathlon competition with a great performance in the final test, the 800 meters, on a day in which the race was moved to later due to the extreme heat. Taliyah Brooks left the track in a wheelchair in the early afternoon when the temperature reached 108 degrees Fahrenheit (42 degrees Celsius) on the track. It was 96 degrees Fahrenheit (35.6 Celcius) at the start of the seventh and final event of the heptathlon.