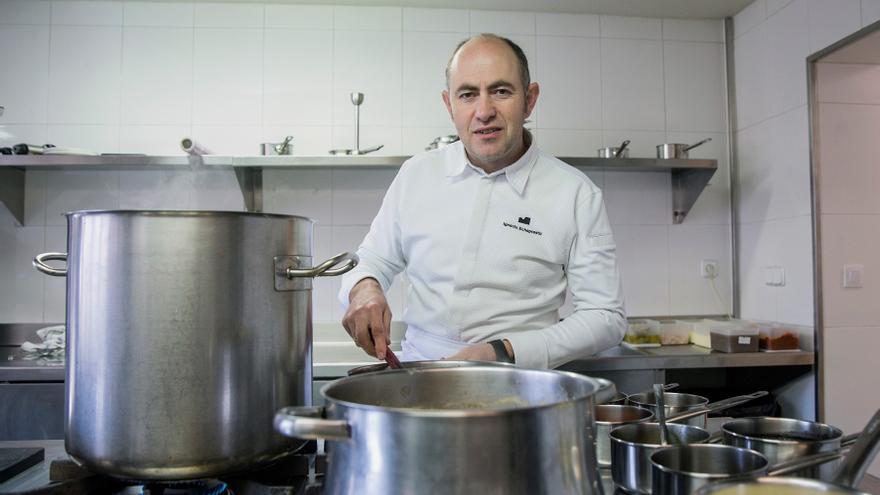 Madrid, Jun 17 (EFE) .- The Michelin Guide and its green star, Repsol and its sustainable sun, The World's 50 Best Restaurants and its award for the most sustainable or the latest edition of the Madrid Fusion international summit dedicated to circular gastronomy these are just some signs that there is no going back in the chefs' concern for the planet.

This Friday is celebrated the World Day of Sustainable Gastronomy on guidelines accentuated by the pandemic: worry even more about environmental conservation, pay suppliers fairly and take care of restaurant teams in terms of schedules.

There are already many restaurants in the world that have their own gardens and recover native species; Others have radically changed their culinary proposal by reopening, such as Daniel Humm, of the tri-star Eleven Madison Park (New York), which has eliminated meat, fish and seafood to focus on vegetables because "the current food system is not sustainable," he argued in Instagram.

Some more have embraced biodynamic agriculture, such as Mauro Colagreco, from the also three-star Mirazur (Menton, France) and currently at the top of The World's 50 Best Restaurants, who now serve menus based on flowers, leaves, roots or fruits according to the cycles. moles. "Nature should be at the center of kitchens, you have to practice a circular gastronomy that respects the cycles of life," he argues.

For a long time, the Moon has also guided Ignacio Echapresto, with a star in Venta Moncalvillo (Daroca de Rioja), in whose garden there is an "insect hotel" and they have honeycombs with which they make mead. "Sustainability is the environment and not forcing the machine, taking what nature gives you," he argues.

Iolanda Bustos defines herself as "daughter of the country", who left La Calendula (Regencós, Girona) because "the new management of the hotel, where the restaurant was located, was not aligned with the values ​​of sustainability". Now he cooks "directly in the field, in orchards and houses, we have wild picnics," he explains to Efe, to "connect people with the environment and rural life."

Plants and flowers are the protagonists of some dishes that are also governed by biodynamics: "It is nothing esoteric, but the farmer's calendar".

Steeped in that philosophy for years, she now claims that the sector must be "sustainable also in its equipment and its schedules; you can have the best ingredients in the world but you will not give good food with stressed cooks; the hours of the hospitality are fatally mounted" .

The three-star El Celler de Can Roca (Girona) also advances along this path, where great steps have already been taken in terms of recycling, energy efficiency and avoiding food waste. Joan, Josep and Jordi Roca, UN ambassadors for the sustainable development goals since 2016, have taken advantage of the time restrictions due to the pandemic for their team.

"We have brought the dinners forward to 7:30 pm so that the service has finished at eleven o'clock. And it is working," says Joan Roca.

Jordi Cruz has taken the same line in Barcelona: "In the ABaC Group -which has six stars- we did not open until dinner was not available and we liked the hours from 7:00 p.m. to 11:00 p.m.".

This "humanistic revolution", as the Roca baptized it, is nevertheless much less advanced than that of the producers. "Everything with names and surnames, and not chefs, but producers" is the motto of Marcos Gavela in Le Qualitè Tasca (Madrid), born seven years ago in support of the small local productions of emptied Spain.

"After the fusion and technical boom, the product boom arrived, because without working the land it is impossible to reach an ecological and sustainable gastronomy. Although it still costs, the client does not value it so much," this Leonese man told Efe.

The sheep and lambs from Loja from Fuente del Sapillo (Usagre, Badajoz), the calves from the Fornela Valley (El Bierzo, León), smoked paprika, black garlic and honey from Vallelongo (Ocero, León) ... "Es more important to eat everything but that is sustainable, ecological, artisan, seasonal ", says Gavela.

It is shared by María José Martínez (kitchen) and Juan José Soria (head of the room and sommelier) from Lienzo (Valencia), who this season have eliminated the menu and offer three tasting menus with sustainability and local produce as axes.

"Each ingredient tells a story, from its selected origin to its introduction and combination in recipes", says Martínez, who uses sea jonquil and prickly pear from Albufera, organic guirro lamb or Confit beans in his dishes.

The three Michelin stars and three Repsol Suns Repsol Cenador de Amós (Villaverde de Pontones, Cantabria) carry sustainability beyond the kitchen, which in alliance with the energy company has become "a pioneer in the generation of one hundred percent renewable energy" They have announced in a note.

In addition to its own consumption, it will be the first Spanish restaurant to share with some of its neighbors part of the energy generated with solar panels installed on its roof thanks to the pilot project "Kitchens of Energy Excellence" promoted by the Repsol Guide to transfer energy efficiency and sustainability to gastronomy.

Tags: gastronomy, March, not, sustainable, there are