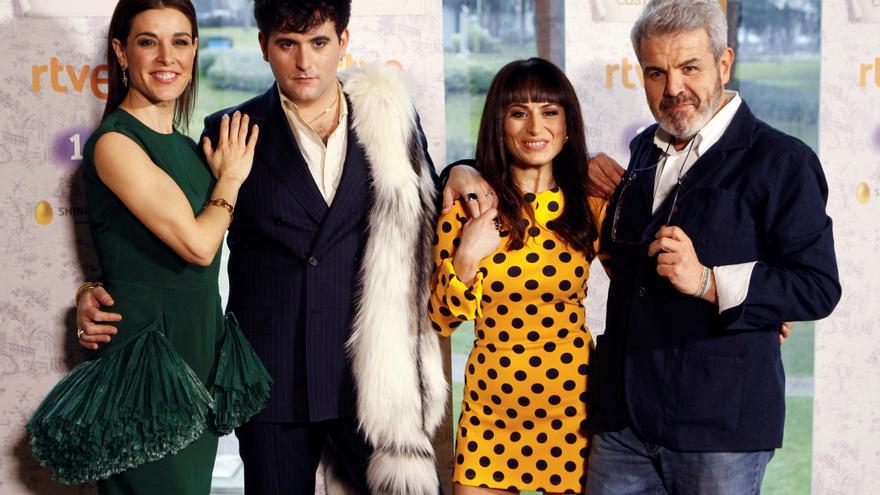 Madrid, 2 mar. (EFE) .- Sustainable fashion has been the axis that has structured the three tests in Maestros de la Costura, one night to which the yoga teacher of María Escoté has joined, who has offered Laura relaxation techniques that would calm her nerves, how bad times they play.

“We all need yoga classes,” said Lorenzo Caprile with an air of revenge, when in the last test his other two companions in the jury made him waste time making the garment.

The margin of error is allowed less and less in “Masters of Sewing”, which for the first time has welcomed in the workshop Raquel Sánchez Silva, who came down to sew as requested by the apprentices last week, and with good humor has applied his motto “to sew and sing everything is to begin”

One night in which Javier has had to leave the workshop, with the regret of his colleagues who consider him a pillar of calm for all, and in which the Spanish international top, Blanca Padilla, a Victoria’s Secret model on two occasions, presented his first collection made with sustainable fabrics.

Sustainability as the only way to face the future of fashion is what has motivated that the first test was to make swimsuits with recycled fabrics, such as those made by Patricia Caballero for allSisters, pieces that have worn from Bar Refaeli to Monica Belluci.

Despite her good work and her concentration, Raquel Sánchez Silva did not finish the swimsuit she had to present, not due to lack of time or skill, her task as presenter demanded her and she could not continue.

“I have practiced, this is my second swimsuit and, although I have not had time to finish it, I am very proud,” she said, satisfied.

A test in which Mily got the desired golden apron, which ensured her continuity for another week, despite the result she obtained in the following tests.

After the tension of last week, the calm has arrived between Gabriel and Lluís, the two incompatible apprentices of this edition; a relationship that sparks from the first day and that far from being diluted there are times in which it is increasingly fired up, to the point that the Catalan takes the slightest opportunity to harm his partner.

“I prefer to opt for indifference,” said Gabriel, very dignified, without entering into disputes when Lluís had the opportunity to take time away from one of the tests.

Outdoors, the visit was to EcoAlf, the Spanish company pioneer in sustainable fashion, which makes its garments with waste obtained from the sea, with which the Spanish model Blanca Padilla has presented, for the first time, a capsule collection designed by her.

A test in which Lluís directed the two teams, a work that the judges praised, despite the fact that the result of the garments was not the best and has led him to the expulsion test.

In the last minutes, and jokingly, the soprano Ainhoa ​​Arteta visited the apprentices. Having married four times was the reason for the visit, as the contestants had to recycle a wedding dress and turn it into another garment.

The soprano revealed that in her first marriage she wore her mother’s wedding dress a moment of “emotion” that fit perfectly with the sense of the test, which has been the one that has finally led to the expulsion of Javier, the executive del Levante, who temporarily left football to dedicate himself to sewing, his passion.