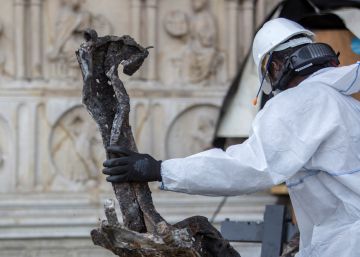 Notre Dame dawned this unusually silent Friday. Neither cranes nor construction noises or constant movement of workers. All works of protection and recovery of the remains of the gothic cathedral burned three and a half months ago They have been paralyzed "for a few days." They are orders of the prefecture responsible for Paris, concerned that workers are not strictly following the protocols to avoid high exposure to lead that still infests the surroundings.

To enter the perimeter of the work of Notre Dame, surrounded by the fire on April 15 of a wall that prevents access to those who are not properly accredited, you have to go through a small installation with water to decontaminate the shoes, an operation that It must also be done before going out again. The offices of architects and workers are located in containers placed in the area after the cathedral, on a concrete platform, in an already decontaminated space and through which it is allowed to walk without protection. Something that changes as soon as you access the surroundings of the temple. For this, it is mandatory to wear work shoes, wear a disposable jumpsuit and gloves and work helmet. In the case of the workers, a mask is added.

“We take enormous precautions in the work to guarantee, above all, the health of the workers and of all those who are permanently in the area,” said Wednesday the chief architect of Notre Dame, Philippe Villeneuve, to a group of journalists. “It's a problem that we have to take seriously without falling into hysteria. The alarmist side is a bit cartoonish, you have to find a middle ground, ”he insisted, stressing that“ you have to really suck the ground to get sick ”. And he stressed: "This is not Chernobyl." None of the tests performed on the workers, he added, had so far given an index of lead contamination even close to the limits established by health.

However, it seems that the device in motion is not enough. And that the dictated protocol is not strictly adhered to. This is what a labor inspection report delivered this week to the Île de France prefecture in which Paris is located and which has led its prefect, Michel Cadot, to decree the temporary suspension of works until these "adapt" to all necessary precautionary measures and the work teams receive the necessary training to ensure that they comply in a "rigorous" manner. According to Cadot on Thursday, precautionary measures, such as the use of special suits or decontaminating soap, "did not apply sufficiently."

The announcement coincided with the closure also, for two days, of two schools near Notre Dame that were offering summer courses for 180 children. It is also a precautionary measure, said the City Council, after they were detected – "only in the yard" – concentrations of lead at levels above 5,000 micrograms of lead per square meter, a measure that activates the warning notices. During the closing, the “deep cleaning” of the school yards will proceed.

“Our relationship walks along the narrow edge next to the precipice”

‘The Sisyphus papers’, the torture and the closure of the Egunkaria newspaper take the stage