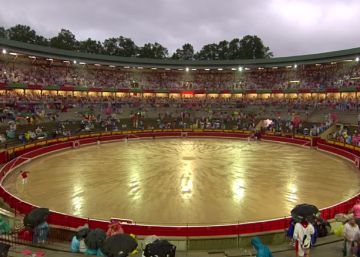 The second bullfight of the fair of San Fermín has been suspended because of the strong storm that since Monday afternoon fell on the capital of Navarre and left the ring of the square totally impracticable for the fight.

This was confirmed by the authority after seven o'clock in the afternoon after the celebration was postponed for half an hour to make a final decision according to the meteorological evolution. The rain did not subside during those 30 minutes, and the bullfighters, the company and the authorities finally decided the definitive suspension despite the economic loss that it entails for the Casa de Misericordia and the loss of a possibility of victory for the bullfighters in a bullring. the importance of Pamplona.

They were announced the right-handers Manuel Escribano, who returned to a fair first after the strong goring that suffered in San Isidro before a bull of Adolfo Martín; Rubén Pinar, who is completing a successful season, and Juan del Álamo, in need of a success to relaunch his career. The bulls belonged to the livestock of Cebada Gago, who returned to the Sanfermines for the thirty-first time.

The bullfight has been permanently suspended, which means that the price of their tickets will be returned to the spectators, the bullfighters do not charge, the company will only receive insurance for rain, and what will happen with the bulls remains in the mystery , which are the property of the Casa de Misericordia, which have run in the confinement of the morning and have stepped on the ring and which, for the moment, will not be dealt with. The circumstance occurs that one of the bulls turns six in November, which means that after that date can not be fought in a bullring.

Strangely, and in spite of the threatening weather forecasts, plastics were not placed in the ring, so minutes before half past six, the scheduled time for the beginning of the celebration, the floor was totally flooded.

With the empty lines and a persistent downpour, there appeared some workers with sponge rollers to remove as much as possible the large amount of water accumulated near the boards of the barrier. It was then when all the actors decided the postponement. But it did not stop, and the forecasts announced that the storm would continue until dawn with abundant rain and lightning.

In spite of everything, there were many spectators who occupied the lines, well equipped with raincoats and umbrellas, and were crowded the stands and volleys of waiters and girls who did not lose heart and endured the wait with the fun of the bullfights.

Many of them protested the suspension, but it was evident that the muddy roll and the forecast of more rain made it impossible to deal with the astifinos and dangerous bulls of Cebada Gago with the minimum guarantees of safety for the bullfighters.

This is the first suspension of a celebration for rain that occurs in San Fermín in the last 20 years, because the previous one, which entailed a postponement of 24 hours, was the bullfighting scheduled for July 4, 1999 in which they announced Francisco Marco, El Fandi and Juan Bautista.

The weather forecasts do not announce rain for Wednesday, day 9, in which the right-handers Fernando Robleño, Javier Castaño and Pepe Moral will fight José Escolar's bulls.