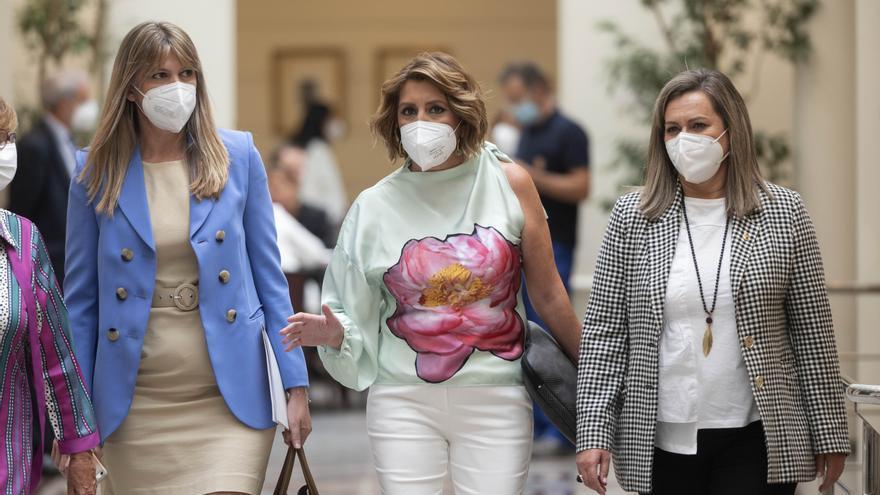 “You know that I talk to clothes.” With that phrase and a smile, Susana Díaz greeted a group of journalists in the hallway of the Senate where the editors and cameras began to crowd on Tuesday awaiting the arrival of Pedro Sánchez to the first control session after the summer break. It was his return and the beginning of his life – from Monday to Thursday – in Madrid. The new stage after having lost all power in Andalusia in two batches: first the Government, then the party. The photographers took the opportunity to immortalize the moment in the Upper House. Dressed in a T-shirt with a drawing of a rose – the socialist symbol – the former Andalusian president entered the hemicycle escorted by two of the few parliamentarians who stood by her side in the last battle.

Nothing to do with the message their shirts sent not long ago. “Positive energy” was what was read on the one he wore when he kicked off the primaries against Juan Espadas in which he reaped his third (and final) defeat. Since she left the Senate in 2012 until her return, Díaz’s political life has changed radically: she herself defined her primaries against Sánchez as “hostia.” And she was also the first socialist to lose the Junta de Andalucía after decades of power and she resisted abandoning the leadership until the end. The Senate, again as a withdrawal, in an exit that has agreed with the current secretary general of the Andalusian PSOE.

“At that time I knew less about the institutions, I had not gone through a government, I did not know many of the mechanisms to influence people’s lives and now I have been more worked, with more experience, with more years in the front line and that he makes people enjoy it in a different way, “he said about his return to the Upper House.” I think it’s going to be a beautiful stage. ”

Díaz tries to eliminate any traumatic loophole to that exit and declares herself “excited.” “Visibility for me is irrelevant,” he said Tuesday after swearing in his new position – something unusual in the socialist ranks in which it is customary to promise. Used to being the focus of media attention since melés journalists pursued her looking for her statements, this time it was the press department of the Socialist Group that had to summon the editors in the Senate’s Lost Steps room because Díaz wanted to make his debut before the microphone. Only six or seven came.

“What fills me is doing things that improve people’s lives,” continued Díaz, who has proposed “to do new things in the Senate that allow citizens to be brought closer.” “Social networks are a way of connecting with people,” he said by way of a declaration of intent. The day before he had uploaded to Instagram a photograph of him in the hallway in which he asked: “Where am I? Congress or Senate.” He later posted videos of his arrival and inauguration. It has also taken up a Blog.

The premiere of Díaz coincided with a control session for Sánchez, with whom he says he has a very good relationship after the war that split the PSOE in two and that bloodshed by the federal committee on October 1. “Have they greeted each other?” “I have not had the opportunity. You will have seen where I sat in the Chamber,” he replied. The former president has been placed in seat 68 – next to the aisle in the second row of the socialist group and third in the hemicycle if the Government bench is counted. Not very close to the most polished stalls, not even in the chicken coop. “He could have gotten up to greet him,” a comrade in the ranks says with some sarcasm.

Known (in the past) for airing her discrepancies with Sánchez regarding the territorial conflict, Díaz was asked in the Senate for his opinion on the dialogue table that met 24 hours later. “That I do the previous one to the own table does not seem to me the suitable thing”, responded. “I know I have not answered you, but I will answer you,” he said off camera and again with a smile at the journalist who had asked. But the focus in the Senate is very limited.

Díaz did speak about Catalonia in one of the gatherings that he has joined in Mediaset. “As I think there is no doubt what position I have on the Constitution and how I love my country and how I love it, I think that when politics does not dialogue and is not able to speak it becomes useless,” he told the exporter of the PP Cayetana Álvarez de Toledo, with whom he shared the set with the deputy of Vox Macarena Olona and the Citizens MEP José Ramón Bauzá at the Ana Rosa’s program, one of those he visited most frequently as a socialist leader. The former Andalusian president promise to also be the great signing of Risto Mejide in Everything is a lie.

In addition to her life as a socialite and influencer of politics, Díaz is waiting to be named president of the Senate Committee on Industry, Commerce and Tourism. In that position he will relieve María Luisa Bustinduy, who was positioned on his side in the primaries against Espadas. The march of the former president to Madrid has taken its toll on her relatives, several consulted sources agree. To be named a senator by regional appointment, Fernando López Gil had to resign, who was relocated as commissioner for the 2030 Agenda in the San Fernando City Council (Cádiz).

In the case of Díaz, the chairmanship of that commission is an extra in the salary as a parliamentarian: at 3,050.66 gross euros per month in 14 payments of the constitutional allowance and the 1,958.02 euros as compensation for travel expenses The 1,551.74 euros are added for being in charge of the area. “It has gone to the maximum”, says an Andalusian leader. The PSOE-A has maintained during these months Díaz as president of the group in the regional Parliament so that he would not lose the extra that this position represents at 3,261.53 euros as a base.

That is why she surprised many Andalusian socialists on Wednesday by appearing in the Autonomous Chamber and occupying what has been her position as head of the opposition after taking office in the Senate. Party sources explain that the IT services did not give time to stop being listed as president of the group and that is why she sat in that seat. However, what the new leadership of the Andalusian PSOE expects is that, once it has taken the AVE to Madrid, it does so permanently and also renounces its act of deputy.