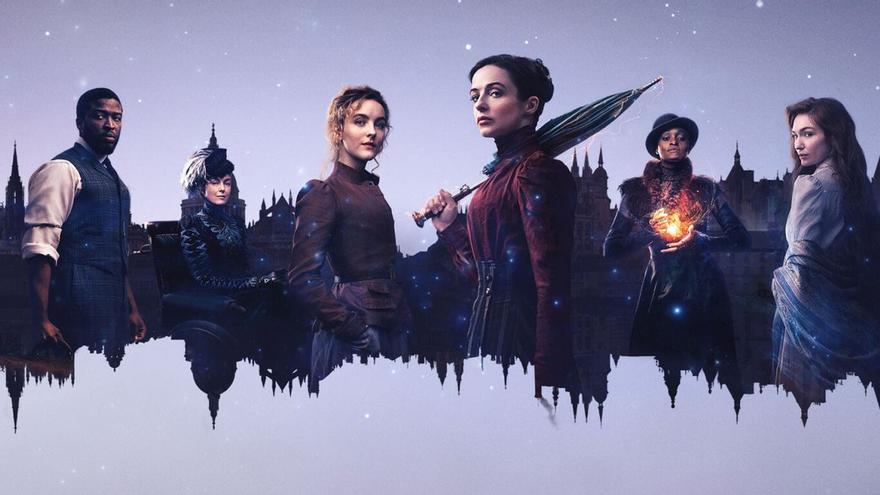 There was a time when the superhero cake was shared by two major publishers: Marvel and DC. The rights to its iconic characters are held by two platforms. Disney has Marvel; Y HBO Max It will be the one that in the not too distant future will feature all the DC series. A map that leaves Netflix already Amazon off the board of caped vigilantes, so they have had to go to independent publishers to try to find their own titles and not be left out of the race. The first one did very well with ‘Umbrella Academy‘and the second with’The Boys’.

There is life beyond Marvel and DC for the fan. Over the last few weeks on different platforms, several series of the genre from sources totally unrelated to these two comic giants have coincided. A material that has started with the advantage that by having characters that are not so established, its authors have been able to enjoy greater freedom when developing their stories. Some of these new heroes have been created by former stars of the ‘majors’ who tried to build it on their own to have more control of their characters. Curiously, this maneuver has also created the opposite effect, with Marvel and DC knocking on the door of indie creators in search of higher quality content. This week on the blog, we take a look at the new superhero series with a vocation to be independent.

‘Invincible’ (Amazon). The creator of the comic on which this series is based is the same as that of ‘The Walking Dead’, Robert Kirkman. Now that the reef of the undead appears to be depleting, Amazon has found a new mine to continue to exploit. The result of this first season has been so satisfactory that the series has already been renewed for two more installments. Make no mistake because this title is animated. It is much more brutal than ‘The Boys’ and its contents are far from being childish. With all power comes great responsibility, but it must not be forgotten that absolute power corrupts absolutely. The stronger you are, the more easily you can smash skulls and dismember bodies.

The protagonist is a young teenager, Dirk Grayson, son of one of the most powerful superheroes on the planet. When he turns 17 he begins to develop his own powers and as he begins to save the world, he discovers that behind the figure of his father there is not that person whom he has admired for so many years. Kirkman seems to be a connoisseur of the genre and leaves in his plots many nods to the universes of Spider-man and of Superman. During the first season, the foundations of the entire mythology of the character that the screenwriter has been developing for more than 17 years have been laid and it seems that we still have a fascinating universe to discover. The closing of the first season leaves us a small preview of all the plots that will continue in the second to put the long teeth. Dirk Grayson’s voice is provided by Steven yeung, who played Glenn in ‘The Walking Dead’ and left us all with our hearts in a fist when he died at the hands of Negan. While his father is played by JK Simmons, the same one that got into the skin of J. Jonah Jameson in the Spider-Man movies. Is it any coincidence that OmniMan physically resembles the editor of the Daily Bugle?

‘The Nevers’ (HBO). A couple of years ago, the signing of Joss Whedon by HBO to make a new series might sound like a pitch. But in the following months, the creator of ‘Buffy the Vampire Slayer’ and the architect of the success of the first installment of ‘The Avengers’ has fallen from grace and got off the project through the back door before the end of the first season. The news that appeared about his despotic character and the complaints of actors and actresses who at some point in the past worked with him about his abuses of power turned this series into a cursed project. HBO had the hot potato left on the table of hiding or not the name of who had been the main promoter of the series, which has remained in the hands of Philippa goslett and with all its plots on track. There are no complaints from the team of this series, The first season initially consists of six episodes that have already been broadcast and four more would be missing, which were reached by the stoppage of filming due to the pandemic.

Having seen the six chapters we see that the cursed name of the author was not easy to hide, since he writes and directs a good part of them. But the fact is, it hasn’t been touted like the new Whedon series, the one he owed us a long time ago. We do not know if this will end up being one of those cult series of the creative, who with a single season behind him ended up dragging legions of followers and did not continue, as happened with ‘Firefly’. ‘The Nevers’ offers us a kind of Patrol x in nineteenth-century London. Lycra suits are replaced by vintage dresses and steampunk technology. And also part of original material, it is not an adaptation of any comic.

If you create your own characters, there is no copyright fee. And with Whedon the most charismatic characters were always guaranteed. The series brings together ingredients of the purest showrunner, strong female characters with charisma, who become heroines in spite of themselves, having to save a world that haunts them and hates them. They are the chosen ones, a concept that will sound more than familiar to Buffy fans. The series has a solvent cast, a wide roster of supporting characters. In these six chapters the foundations of a title with great potential have been laid, as long as Whedon’s weighted reputation does not finish sinking it.

‘Jupiter’s Legacy’ (Netflix): If Joss Whedon was the architect of the movie success of ‘The Avengers’, Mark Millar was the writer of the comics that inspired the film. He was one of those authors who with his name on the cover made that comic a sure success. Millar was never friends with staying long in a series. He would arrive, write what should be his definitive story and then go to graze in search of greener pastures. In the end he ended up riding on his own in the superhero market and on his doorstep he was one of the first called by Netflix when he divorced Disney and lost Marvel. The screenwriter pen of ‘Civil War’ inspired other film titles such as’Kingsman ‘,’ Wanted ‘or’ Kick Ass’.

‘Jupiter’s Legacy’ is the first of the series based on his comics after the agreement with Netflix. Try to be a mix between ‘The Godfather’, ‘Succession ‘ and the ‘Watchmen’, telling us a story that moves on two time planes. One, passes after the crack of 29 destined to narrate the origin of superheroes. The other is currently with that white-haired Superman who is already considering giving the cape to his children. It tries to be the definitive twilight story of the genre. A saga in which one of the main commandments that the primal heroes imposed on themselves begins to be questioned: You shall not kill. And this promises to be the future source of chaos, because the season ends when it seemed that everything was going to begin.

The problem with the series is that it gives the viewer the impression of having reached the halfway point, with characters that may not interest them so much at first, no matter how convinced their authors are of the benefits of the plot they want to tell. The aesthetics and action scenes are good, but the series still needs to improve. The person responsible for the adaptation is Stephen S. DeKnight, former Whedon collaborator and head of series such as’Spartacus’ and ‘Daredevil’. Maybe it has a bit of intensity left over and it lacks more bad slobber.

‘The Boys’ (Amazon): The series that opened the door to independent publishers on television platforms and is on its way to its third season. The creator of the comic Garth ennis He has always parodied the superhero genre in his cartoons and here specifically the supergroups. It is easy to recognize the masked people of ‘The League of Justice’ among their characters. Marvel itself once made its own parody of the JLA which, in order not to be denounced for author problems, he called the Diabolical Squad.

The superheroes of ‘The Boys’ are very far from being an example of behavior such as those of Marvel or those of DC. In The Boys we meet the most politically incorrect group of the platforms. There is nothing more savage in these times than starting the second season by gutting a whale. In ‘The Boys’ there is as much ultraviolence as in Invincible, but in real image. Patriot would be a kind of corrupt Superman, who becomes too dangerous a toy for the evil corporation to control the whole show.

Although not all are villains in that twisted group of vigilantes. The true protagonists of the story are that gang that could be considered a terrorist, led by El Carnicero (Karl Urban) who comes together to tackle the collateral damage normally left behind by self-proclaimed vigilantes. Perhaps here the writers of ‘Jupiter’s Legacy’ could look for a bit of that bad slime that their series is missing.