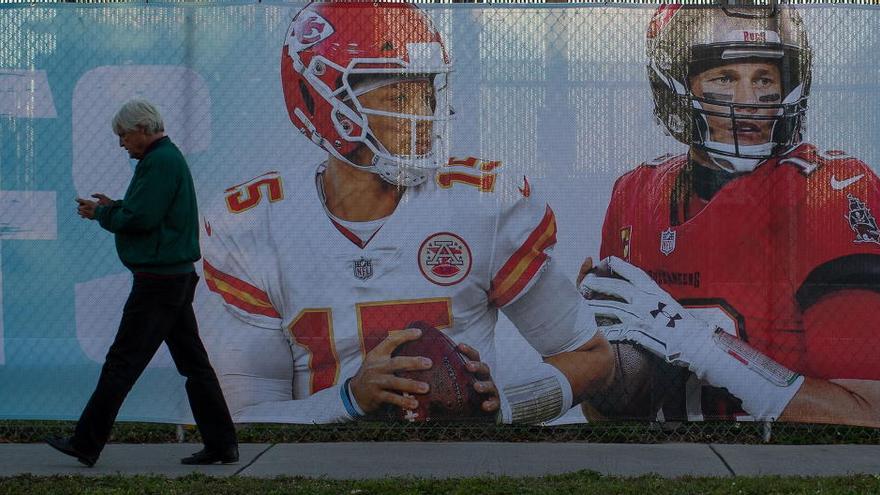 Super Bowl LV takes place this Sunday, February 7 at the Raymond James Stadium in the town of Tampa, in the state of Florida. The defenders of the title, Patrick Mahomes’ Kansas City Chiefs, they start as big favorites before the true revelation of the tournament, the Tampa Bay Buccaneers, who have in their ranks a true legend like Tom Brady after his departure from the New England Patriots, the franchise with which he had played his entire professional career.

The 55th edition of the decisive game of the American football season will be one of the most followed sporting events on the planet for yet another year, although it has some peculiarities due to the effects of the coronavirus pandemic. Without going any further, it will be the Super Bowl with the least public in the stadium stands, since only 22,000 people will be able to access the venue, about a third of what will fit in it. As a tribute to those working to counter the pandemic, some 7,500 of the viewers who will be able to see the final live will be health workers already vaccinated from the state of Florida.

The Chiefs are presented as great dominators of the regular season, coming as top finishers in the AFC with a record of 14 wins and only two losses. In the postseason, Kansas first beat the Cleveland Browns (22-17) and then the Buffalo Bills in the conference final (38-24), playing both games at home.

For its part, the Buccaneers star in the great history of this Super Bowl. A franchise with a modest history, which has not been in the playoffs since 2007 and has not won a game in them since 2002, spurred on by the signing of the veteran Brady (43 years) and far from starting as a candidate, is classified in a creditable fifth place in the NFC and is successively eliminating the Washington franchise (the former Redskins, no longer called that by their racial connotations), the New Orleans Saints and the ‘all-powerful’ Green Bay Packers until they become the first team to play a Super Bowl in their own stadium in the history of this competition.

Super Bowl LV will recover the tradition of iconic duels between the quarterbacks of both teams. The most recognizable piece of each NFL franchise will once again be the centerpiece of a game that brings together two absolute stars of American football.

On one side will be the great star of the moment, Patrick Mahomes, who at age 25 already led the Kansas City Chiefs to achieve the maximum goal last year in this sport. In just three seasons, the 25-year-old Texan has already accumulated individual awards, the recognition of all experts and fans, and a spectacular future ahead. This season, his numbers are even better than in the previous one, but to confirm himself as the current dominator of the Super Bowl, he will need to beat a legend.

And is that He will face one of the greatest myths in the history of the competition, the veteran Tom Brady whose career seemed to fade when he announced his departure from the franchise in which he had played his entire career, the New England Patriots. However, he decided to sign for the Tampa Bay Buccaneers, a franchise in which great achievements seemed like a real challenge, and the result so far could not be better. At 43, Brady will play his tenth Super Bowl, having won six and received four awards for the MVP of the appointment. Considered a true commercial icon, as well as one of the best players of all time along with legends like Joe Montana or Peyton Manning, a new winding, more if possible with a franchise without the theoretical potential of the Patriots, would be an unbeatable finishing touch to complete his career.

The great intergenerational duel is served, and it is that when the Californian debuted in the NFL, his rival was barely five years old. In the Super Bowl, Mahomes took the win last year against Jimmy Garoppolo of the San Francisco 49ers, while Brady has beaten some of the greats over the past two decades. Now the bets are open, who will win this time?

55 – It is the current edition of the Super Bowl. Traditionally, the annual football final is represented with Roman numerals, generating a brand of its own each year. Thus, the duel in Tampa between the Buccaneers and the Chiefs will be Super Bowl LV.

18 – They are the years of difference between the ‘quarterbacks’ of both teams: Tom Brady was born in 1977 and has 43, while Patrick Mahomes is from the generation of 1995, so he has 25 today.

10 – The number of editions of the Super Bowl that Tom Brady will have played when he plays this game. Of these, he has won six. For his part, Patrick Mahomes has barely played one until reaching the current one. Of course, he ended up lifting it.

7 – It is the incredible record that Tom Brady could beat in the event of becoming champion again. Not so much to enlarge his legend as the player with the most titles in history (which he already is), but because if he succeeds, he will have won more Super Bowls than any franchise in all of its history, since the record is the six achieved by the Pittsburgh Steelers and Brady’s own New England Patriots.

22,000 – They are the spectators that will host the Raymond James Stadium in Tampa due to the restrictions caused by the coronavirus crisis, which has forced the capacity to be restricted to a third, making this edition the one that least public will see live in the entire history of the Super Bowl.

6,000,000,000 (of dollars) – It is the amount of money that is estimated to be moved in bets around the Super Bowl. In this edition, the Kansas City Chiefs start as favorites against the Tampa Bay Buccaneers. However, the Tom Brady factor and the fact that the Florida franchise plays the game at home have matched it much more than expected.

5.5 (millions of dollars) – It is what you can get to charge for a television ad inserted in the Super Bowl halftime. In the United States, this event is considered as one of the great television windows, for which large advertisers do not hesitate to prepare special spots in order to enhance their brand in front of a huge audience.

25,000 (dollars) – It is the economic estimate that is awarded to the precious Vince Lombardi trophy, the iconic silver figure crowned by an American football that is traditionally lifted by the champion team of the Super Bowl.

125,000 (dollars) – The economic prize that the players of the winning team receive, approximately. For their part, those of the team that loses the match pay half, just over $ 62,000.

114.4 – They are the millions of spectators who witnessed the most watched edition of the Super Bowl, the XLIX corresponding to 2015 and won by Tom Brady’s Patriots against Russell Wilson’s Seahawks. Since then, television audiences have fallen slightly, but this year, with the greater stay of citizens at home due to the pandemic, it will be a good opportunity to see if the record can be broken.

150 – It is the number of rings that the NFL distributes to the winning team. The ring symbolizes the title achieved, and is distributed among players, technical staff, managers and even personnel that belong to the team of the winning franchise.

1,400,000,000 – It is the number of chicken wings that Americans are estimated to consume during the Super Bowl, and especially at halftime, when The Weeknd will perform in the long-awaited ‘Halftime Show’, one of the most talked about events on social media every year.

Time and where to watch the Super Bowl