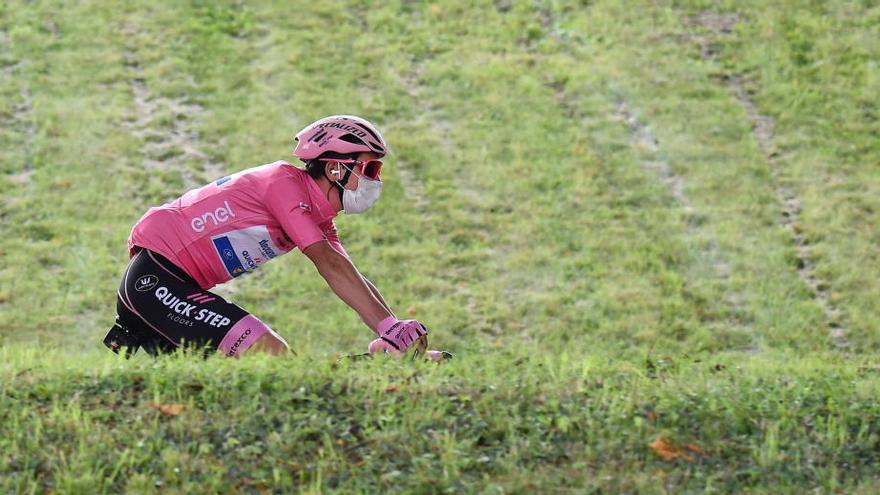 The australian Ben O’Connor (NTT) triumphed this Wednesday in the seventeenth stage of the Italy spin, on a tour of 203 kilometers between Bassano del Grappa and Madonna di Campiglio, in which the portuguese Joao almeida retained the general leader’s pink jersey.

O’Connor entered first with a time of 5 hours, 50 minutes and 59 seconds, with a margin of 31 seconds over the Austrian Hermann Pernsteiner (Bahrain McLaren), second, while the Belgian Thomas De Gendt (Lotto Soudal) completed the podium.

It was a passive stage for the greats of the general classification, in which, while waiting for this Thursday’s climb to Stelvio, Almeida kept the 17 seconds ahead of Dutch Wilco Kelderman (Sunweb) and the two minutes and 58 seconds on the Australian Jai hindley (Sunweb).

The riders met with the high mountains this Wednesday and opened a cycle of maximum demand in the Italian Alps that will take them to the final time trial in Milan, which will crown the winner of the Giro next Sunday.

It was precisely in the Forcella Valbona that a group of 19 runners attacked and took a margin that exceeded eight minutes over the peloton, in which Almeida was still protected by his Deceunick Quick Step teammates.

The peloton returned to manage their energies and let the escape play the victory, with the majors more focused on controlling their direct rivals in the general classification. The result was a poor stage at the show level, but of maximum benefit for Almeida.

Of them, O’Connor was the one who attacked on the climb to Madonna di Campiglio, pursued by Pernsteiner and, meters further back, by De Gendt and Zakarin.

The Australian had a 30-second margin and sealed his fourth win of the season, the first of his career on a grand lap.

He entered first raising his arms to the sky, ahead of Pernsteiner and De Gendt, while Óscar Rodríguez (Astana) was the first Spanish rider, finishing eighth.

There was not much show between the greats, who limited themselves to controlling each other and that ended up benefiting Almeida, who remained in pink for the fifteenth day in this Giro.

Classification of the sixteenth stage:

The medical car team believes that Grosjean was saved by a “knee-jerk” reaction.

Laporta: “I want to unite all of Barcelona towards glory”