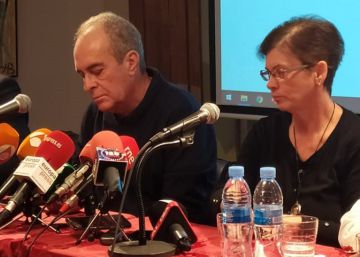 The parents of a 23-year-old from Navalcarnero who died in January 2018 from suffocation, after suffering a pulmonary thromboembolism, accuse the Summa 112 of not activating the appropriate protocol, when not sending a mobile UVI at the first moment. In the first call, which the mother makes after hearing how her son fell, the doctor asks him to put on the young man, who, with difficulty, repeats that he drowns. The Minister of Health of the Community, Enrique Ruiz Escudero, has indicated that Sanitary Inspection is “reviewing the conversations”.

The family has now initiated the claim for patrimonial responsibility of the Public Administration against the Madrid Health Service (SERMAS), but it is also considering resorting to criminal proceedings after receiving last week the audios of the five calls to 112, which claimed after the death of Aitor.

In a press conference organized by the Association the Patient Advocate, an organization whose lawyer represents the family, the recording of the first call has been heard and a part of the audios has been provided. Conversations with SUMMA operators who collect the data before passing the call to the doctor are excluded and that the lawyer considers "very important because it is the first contact in which parents consistently explain what their child's situation is."

In the first audio, Carmen Ruiz tells the doctor that she has heard how her son fell and found him “with a huge sweat” and unable to breathe. The doctor asks Carmen to pass her son and she replies that he can't speak. Rudely, according to Europa Press, the doctor insists that he put the young man on the phone and this one with difficulty tells him to drown, to which the doctor replies that he does not hear him drowning. When asked by the doctor, Aitor replies: "I can't, I drown." The doctor ends the call after talking to the mother who tells him that his son "breathes perfectly" and adds: "A doctor will go to see him but he breathes, come see you later, it seems that he is rather touched by something, no I know … they're going to see him, until now. ”

Ruiz Escudero said that a preliminary report shows that the protocol was followed in terms of the activation of resources (first, an ambulance; then, an ICU; later, the transfer to the hospital), but the conversation that the doctor had with the patient. The counselor has indicated that the professional who attended that person in Summa 112 has worked from 2018 until now “normally”.

The ambulance took 23 minutes to arrive. In between, there were other family calls to 112, but he did not answer the same doctor. Aitor died four days after being admitted. On the way to the hospital, he suffered two other cardiorespiratory stops. The lawyer of Carmen and Bartolomé has clarified that the family does not claim compensation, but rather that the reality of the facts be valued fairly to try to change the protocols.

The Community of Madrid, Isabel Díaz Ayuso, said Thursday that "at the time the protocols were applied", although she has admitted that "there was a lack of humanity" by the professional when answering her family's call for help. Ayuso has pointed out that despite this he supports all the professionals who work at Summa 112 "attending emergencies in Madrid" since he knows that "the vast majority" does "with the efficiency, kindness and special attention that must be offered to the citizens".

The vice president of the Community of Madrid, Ignacio Aguado, said that the first feeling he has had when listening to the audios in which the young man's family asked for help at 112 has been "outrage." The PSOE will request the complete file on what happened.

They create a method that uses CO2 to purify metals

There are no safe levels of air pollution, according to an Australian study

Philippines suspends visas at destination for Chinese to contain coronavirus