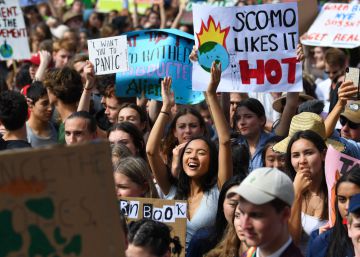 Tens of thousands of students have taken to the streets of Australia this Friday to start a global strike that requires world leaders to meet for a UN Climate Action Summit Take urgent measures to stop an environmental catastrophe. From Sydney to Sao Paulo, thousands of students will close their notebooks and participate in a "school strike for the weather", which should be one of the biggest calls to action seen so far. In total, more than 5,000 events are scheduled in 156 countries throughout the week. This Friday student strike will culminate in a demonstration in New York, where the participation of more than one million people is expected. Heading the New York protest will be 16-year-old Swedish activist Greta Thunberg, motion booster Fridays for Future.

"Stop denying that the Earth is dying," said a sign carried by a student protesting in Sydney, while most social networks show students gathered across the country, among others in various state capitals and inland towns like Alice Springs.

The Pacific island countries, the most vulnerable to the increase of the water level due to global warming, they have also participated in the protest.
School children in Solomon Islands, some armed with shields and
flags and others in canoes, congregated near the sea to ask for actions to mitigate the climatic emergency.
While the Kiribati school children chanted, fists raised,
"We are not drowning, we are fighting."

"We don't start it, but we're trying to fight it," said another banner at the Sydney rally.

Similar protests, inspired by the 16-year-old Swedish activist Greta Thunberg, are planned worldwide this Friday, with eThe goal is that students and others hable with one voice on the imminent effects of climate change in the planet. The UN summit brings together world leaders to discuss strategies mitigation of climate change, such as the transition to energy sources Renewable from fossil fuels.

Australian Finance Minister Mathias Cormann noted this Thursday to Parliament that students should not participate in the protest movement. "Students must go to school," he said. In New York, however, 1.1 Millions of public school students have permission to miss classes.

The mobilizations to demand measures against climate change will last until September 27, coinciding with the celebration in New York of the summit convened by the United Nations to boost ambition in the negotiations of the next Climate Conference to be held at the end of year in Chile.

The campaign is on its way to becoming the largest mobilization climatic history and Fridays for Future already has a list of more than 5,225 events in 156 countries that will take place from 20 to 27 September, and more are added every day. In addition to young people, adults will join young people and, in fact, 350.org platform estimates that more than 73 unions; 820 organizations;
2,500 companies have already expressed their support for strikes and, up to 6,323 Internet pages will conduct a digital climate strike.

In Spain, the strike, supported by Alliance by the Climate has the support of more than 300 organizations and Fridays For Future He has called 179 strikes across the country. Fridays for Future activist María Laín, who will participate in the summit of young people that will be held in New York on Saturday has highlighted that the Climate Summit for Youth will be "a historic moment" in which hundreds of young people from all over the world will gather to find solutions to the climate crisis and require politicians to act.

"Young people know that Spain will be one of the most European countries affected by this crisis and that is why we have manifested throughoutof the whole year The world strike on September 27 will be the point culminating of our protests, and I would like both young and Elders joined our cause. Whoever you are the climate crisis it affects you, and you are part of the solution, "he has claimed.

Specifically, from the Youth for Climate organization they have indicated that throughout the week there will be different actions throughout the country since workshops, banners, information points, among other activities. To the young people have also joined Mothers for Climate whose objective is to raise awareness about the climate crisis and continue to put pressure on them to be taken blunt measures to protect the planet.

In the United Kingdom, the International Trade Union Confederation has asked its five million members to support the strikes, as well as the Irish Forsa union, with 80,000 members joining. Meanwhile, in Italy, the largest union, the CGIL with more than five million members, will hold assemblies in the workplace on September 27.