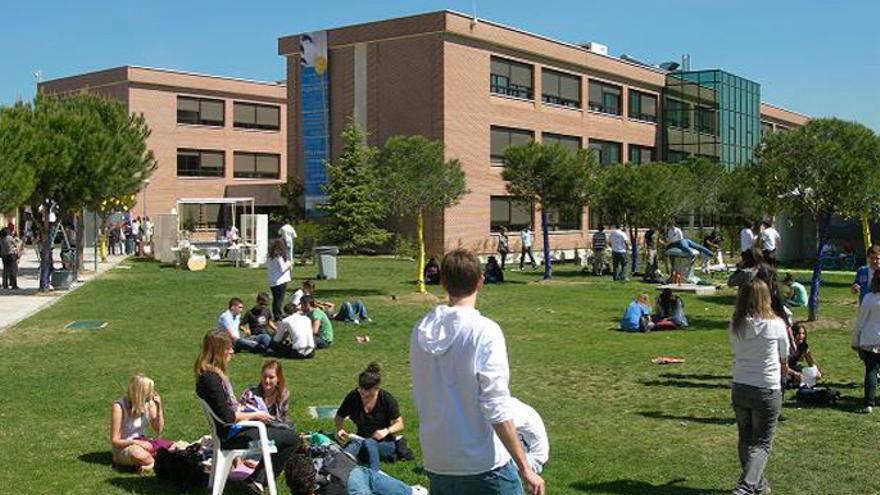 The Francisco de Vitoria University announced on Wednesday of last week that temporarily suspended to Professor Luis María Ferrández after meeting the information published on elDiario.es: six women, four of them former students, point him out for different events and situations that they lived with him. The center also reported that it was starting a period to investigate what happened and invited any student to use the open complaints channel. A week later, the center says it has no record of any complaint or complaint.

The climate among the students is, as elDiario.es has learned, one of distrust and fear. And it is that the same day that the university announced the suspension, the Faculty of Communication organized a meeting with class delegates in which, as this wording has been able to verify, a spokeswoman showed her confidence in the producer and film director: “We fully trust what Luis tells us.” The university lacks a specific protocol for sexual and sexist harassment, despite the fact that it has been required by law since 2007, and the investigation is limited to an email address in which to receive complaints.

The feeling that runs through the classrooms is that the decision to temporarily suspend Ferrández from employment is “so that it can be seen that they have taken measures until the subject is forgotten and he returns” to teach. In fact, the university has not appointed a substitute and the instructions received by the students are that the classes missed during these weeks will be made up once the professor rejoins. Although when he announced the suspension, Francisco de Vitoria did not explain how long it would last, elDiario.es has been able to know that it is a period of two weeks.

Luis María Ferrández (Madrid, 1977) was a Goya candidate for Best Fiction Short in 2011 for ‘Hemisphere’ – starring Blanca Suárez and Hugo Silva – and author of feature films such as ‘The night a scholarship holder found Emiliano Revilla’ and ‘The Wounded Screen’, a film about the situation of Spanish cinema in which dozens of relevant names from the film industry participated. Ferrández is currently a professor at the Francisco de Vitoria University, of which he is also a former student.

“Obviously, there is fear of reprisals,” explain sources from the student delegation. Among other things, because most of the Final Degree Projects of the University’s film branch pass through Luis Ferrández. Passing these works is an essential requirement to obtain the degree. “You have a very great chance that it touches you”, explain the same sources. A student consulted, who narrates some facts that would be relevant to the case, assures that she will not go to the faculty: “The idea that is being transmitted is that he is going to return in nothing and I have to graduate. They are saying that he has hired I don’t know how many great lawyers and he’s going to denounce everyone. I can’t play it. ”

In the meeting called by Francisco de Vitoria with the delegates of the Audiovisual Communication degree last Wednesday, there were – telematically – various positions from the faculty and the university, such as the career director, Diego Botas, the coordinator of students, Laura Zazo, the teacher and vice-dean Ana del Valle, and the Director of Communication, Javier de la Rosa.

The university officials exposed the case and announced the opening of a period of 15 days to verify the plausibility of the testimonies and to receive emails at an address. However, these announcements were accompanied by other types of statements, according to sources familiar with the meeting. “We trust and fully believe in what Luis tells us,” said one of the university’s spokespersons. They also pointed out that the people who appear in the elDiario.es article have not brought the facts to justice and that “it is not that they have explained much either.” “Luis is having a very bad time, and everything is in the hands of his lawyers,” they pointed out.

In the report published by elDiario.es, six women pointed out and told matching stories with similar details. The story of two of them had precisely as its origin the Francisco de Vitoria University. One of them, a former student, told how at the end of the first day of class, Ferrández asked her for her phone number and he offered her his. “She told me that since she was new and foreign we could talk if I had questions about the class. At first she thought it was normal. But then she started sending me more and more messages. She said ‘hi, how are you doing, do you want to have a drink? coffee in Madrid? “I told him that I was not interested. He kept sending me messages from time to time, it bothered me, it was heavy. In the hallways every time he saw me he would smile and wink at me. The last time he wrote to me He sent a ‘hello, do you want a drink in Madrid?’ I told him no and I clearly replied that it seemed strange to me that he sent me these messages and that he preferred that he not write me any more, and he stopped doing it. He sent me one more message: that if I needed something, I could count on him. “

Another of the women, dedicated to the film industry, recounted what happened with Ferrández in 2015: “He played psychologically with me so that I ended up doing what he wanted. I tried to justify what happened so as not to feel guilty. He took advantage of me, I was very drunk, but I told her that I didn’t want to have sex, I remember that well. I didn’t know how to stop that, my conscience told me to leave but I couldn’t, I felt very bad. I ended up sucking her and I no longer remember if it is that It was he who proposed it to at least end like this or it was I who did it so that he would leave me alone and not have to do anything else. I deleted everything that had happened that night until today, “said one of the women in the article published here.

To questions from elDiario.es, the university assures that the statements made during that meeting do not diminish the impartiality that is supposed to an internal investigation and that they are not discouraging complaints, but insisting that they be made through open channels. The cases that reach the confidential email address will be referred to the Center’s Criminal Crimes Commission, they explain, made up of the manager, the director of people development and the general secretary of Francisco de Vitoria, all men. The commission does not have a gender specialist. The unofficial feminist collective of the university, Ufemv, urgently demands a specific protocol for these cases.

Depending on the result of this open process, the university will take some measures or others, which can range from dismissal to the “restoration of Luis’s honor,” as the Francisco de Vitoria charges to his members explained at the meeting on Wednesday, February 3. class delegates. A restoration that would be, they assured, “the maximum possible” because the situation is “very hard”.

Professor of Criminal Law María Acale was one of the experts who drew up the first plan against sexual and sexist harassment (2006) at the University of Cádiz, one of the pioneers in Spain in having a procedure to attend to victims. Acale insists on the need to have a specific protocol so that the process has all the guarantees, starting with the protection of both victims and the accused while the investigation lasts. As there is not one, the expert points out that the procedure should involve an ex officio investigation by the university and not a mere announcement so that whoever considers it can write to an email address, something that she qualifies as a “compromise solution” and not from “real research”.

“A large university is not the same as a small university, the same with the departments, but if there are professors who can distribute the functions, a precautionary measure would be that this profession does not make academic decisions, does not evaluate, to avoid possible consequences or fears of who complaint. If necessary, an extraordinary contract is processed, “he explains. Regarding the possibility that Ferrández may be temporarily removed from the tutoring and evaluation of the works to avoid inhibiting women from giving their testimony, the university has limited itself to sending this response to elDiario.es: “After the statement sent last week , and while the investigation lasts, we will not make any further statement so as not to compromise the ongoing investigation.

María Acale emphasizes that, in addition, sexist behaviors are a form of violence that is difficult to make visible because it does not fall within the criminal concept of harassment, “which we usually identify with very explicit touching or clear blackmail.” “But you do not have to go to that extreme for it to be sexist behaviors that probably do not constitute a crime, but that’s what the university and the disciplinary regime are for,” he adds.

Sources of the student delegation consulted by this writing show their doubts about the communication channels of complaints from the University. “I do not think they feel safe to say it”, indicates a person familiar with two cases in which the students could make use of these channels. “One does not want to talk and the other, for a semester that remains, says neither. They do not want to get into trouble,” he explains.

The University, say these sources, has not disseminated among the students the mail – confidential but not anonymous – made available for these matters ([email protected]) in bulk. “I had no idea what that email existed,” they point out. Another student says: “No one knows the process that this would follow either. There is insecurity and that will not help someone to go to those media.”