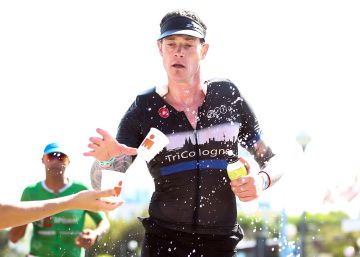 A total of 19 athletes faced this question: "What do you prefer, 10 euros now or 100 euros within 10 months?" They answered impulsively that they wanted the 10 euros here and now, when the "good" answer was the second option. The athletes finished A strenuous three-week workout. This is what Bastien Blain, one of the authors of a study published this Thursday in the magazine Current Biology which highlights the impact of high level sport on the brain of an athlete. An athlete who prepares for the next Olympic Games not only has to take care of his body, stretch it, drink water, eat protein and sleep the hours needed to achieve his best performance. Your brain is also a victim of your exercise. The cells of the organ do not leave immune: the activity of the region responsible for decision-making decreases and alters the athlete's behavior.

The researchers of French National Institute of Sport, Experience and Performance (INSEP) and the Hospital of the Pitié Salpêtrière in Paris of which Blain is part, they have proved, thanks to the activity of 37 triathletes, that training with 40% more intensity than the usual norm suppresses the activity of the lateral prefrontal cortex of the brain, that is, the nucleus of the shots of complex decisions. To do this, scientists have divided the group of athletes (who were fit and not previously exhausted) into two: some would train excessively, others normally. For nine weeks, the athletes went through different phases, alternating effort and rest. After training, they did varied tasks such as memorizing a phone number for example, or performing multiple activities without being able to make mistakes: answer a call, handle email and write in a Word document. The results show that the group that exceeded the recommended effort had a more impulsive behavior compared to the others. In addition, memory was more affected and had lost some efficiency. Blain does not confirm that neurons are lost although Trejo thinks that in extreme circumstances of fatigue they are born less.

The damages are punctual and the stem cells can, after an adequate rest, return to their office normally. But researchers point out that suffering such behavior and feeling extreme stress can lead the athlete to use illegal methods to fight physical and mental fatigue and avoid depression.

The study has been funded by the French Anti-Doping Agency (AFLD) because one of the main objectives of the analysis was to understand one of the causes that could lead an athlete to resort to doping. The French scientist explains that INSEP had already analyzed the behaviors of its athletes, but never produced reliable results. Faced with this problem that reveals the study, Blain reiterates that the human being should not mobilize all his resources in a single activity. “If the prefrontal cortex of the left lateral (area of ​​the brain responsible for decision making) is the one that is affected, it is because it accumulates too much waste that drowns it. Instead of increasing its capacity, physical overflow slows it down, ”he concludes. The expert advises that the training load has to be gradual, controlled and reasonable so as not to put at risk the mental and cognitive health of athletes.

Among the decisions is also knowing how to stop when the body asks, explains José Luis Trejo, head of the Laboratory of Adult Neurogenesis of the Cajal Institute (CSIC). However, the study reveals that when practicing prolonged extreme exercise, the athlete faces a competitiveness with himself for the mere fact of having a cognitive motivation. He wants to be the champion and rest is not in his priorities. The excess sport causes a high, creates endorphins and allows you to endure extreme fatigue. The human thinks that sometimes it is worth suffering. Trejo compares him to an animal: "If a deer gets tired while running, he will stop and think‘ why do I run? "The competitors do not ask that question and that defense system is not good for their mental health, says Trejo. The head of laboratory even equals the effects of extreme exercise on the brain to those of sedentary lifestyle. According to account, stress reverses the system. All the benefits of a moderate exercise are canceled. "It's as if the athlete were sedentary," he concludes.

"You have to motivate people to play sports because most are sedentary and that's not good," says Trejo. It is not bland that all doctors and nutritionists advise since childhood to practice at least twice a week an hour of physical exercise. The benefits are varied. The person feels more optimistic, with a new energy and their stress dissipates. For its part, the brain is one of the main winners of the sport. Physical activity is an antidepressant and "makes you smarter," Trejo adds. Exercise activates the manufacture of neurons and information processing is accelerated. According to the Spanish scientist, those benefits are inherited. "The children of parents who play sports are smarter," he concludes. Of course, as long as it is a moderate exercise.