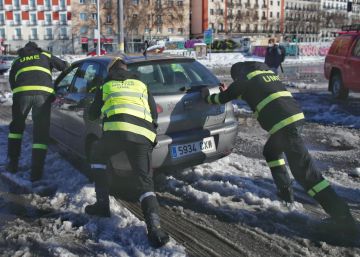 The snowstorm that the storm has left Filomena Since last Friday, January 8, an extreme cold wave has been preceded that will hit the country throughout the week. The situation caused by these extraordinary meteorological circumstances on Monday makes it very difficult for some workers to travel to their centers. In Madrid, for example, first thing in the morning only the Metro was working at full capacity. On the other hand, the community schools do not open until, in principle, on Wednesday. An accumulation of details that has unleashed a multitude of labor doubts among employees.

Do not go to work

First, if you can miss work because it is justified. The answer will depend on the specific case, but, in general, it would be enough to demonstrate the impossibility of going for external causes. Although article 47 of the Workers’ Statute does not include an express reference to extreme meteorological circumstances (snowfall, torrential rains, etc.), it is understood that they may be a cause of “force majeure”. This is how the labor lawyer Pere Vidal understands it, who cites a 1995 judgment of the Superior Court (TSJ) of Catalonia, which declared inadmissible the disciplinary dismissal of some employees who were absent from their jobs as a result of torrential rains. “Justified absences must be understood as those in which the facts are independent of the will of the worker,” the magistrates state. The fact that other colleagues had risked “being dragged through the vegas” does not impose obligations on employees who decide not to run that danger, sentence.

Along the same lines, the Supreme Court, in 2009, refused to sanction a teacher who did not attend her school due to the poor condition of the roads due to a heavy snowfall. The Ministry of Education of Castilla-La Mancha had agreed to reduce her salary for “unjustified absence”, however, the magistrates annulled this decision considering that the employee did not have to assume the “obvious danger to her physical integrity” that It involved taking the vehicle, and, even if there were no closed roads.

The worker, therefore, is protected for absences and absences that are justified. However, the impossibility of attending must be communicated to the center and justified. In principle, asserts the lawyer Juan Antonio Salmerón, it will be enough to prove the impossibility of moving (institutional communications, blocked roads, suspended transport, etc.) “or that the journey involves a high risk.” In the specific case of snowfall, he opines, “It is clear that there are facts independent of the will of the work, of which he is not in any way guilty, so the absence would be accredited and justified.”

The employer cannot force these employees to go to work, adds Vidal, “threatening them, for example, with dismissal or pressuring them in any other way.” It would be contrary to their obligation to prevent any serious and imminent risk to the staff. This protection also covers travel from the worker’s habitual residence to the company, says Salmerón, “since it is presumed as working time for the purposes of a possible accident.” If it is shown that a worker put his physical integrity at risk at the request of the employer and suffered an accident in itinere, “The employer would face administrative and economic consequences for sure, in addition to possible criminal responsibilities”.

On the other hand, as provided for in article 21 of the law on the prevention of occupational hazards, in a situation of imminent risk, in the face of the employer’s passivity, employees even have the right to leave their position to be safe. In this sense, according to the lawyer, it is important to leave a written record of the recommendations issued by the company to its workers “to avoid possible responsibilities in the event of a reckless action by a worker.”

In these cases, Salmerón agrees, “the company is obliged to stop the activity and safeguard the physical integrity of its workers.” A paradigmatic case “is that of truckers or delivery men who have been forced to continue working despite the storm and the state of the roads.”

What about my salary?

If the worker cannot carry out their work telematically either, the company could deduct the days not worked during the storm from their payroll or urge them to make up the hours later. According to article 30 of the Workers’ Statute, they only keep their salary in the event that the provision of the service cannot be carried out because “the employer is delayed in giving him work due to impediments attributable to him and not to the worker.” The courts, explains Vidal, have ruled out that the company has an obligation to pay for days of absenteeism or inactive times caused by force majeure, “unless the collective agreement provides for it,” says Salmerón.

If his salary is deducted, “he will also suffer a proportional reduction in extra pay and contribution,” explains the lawyer.

A different matter is that the workplace does not open and this is the cause of the worker not being able to provide their services. In such a case, the lawyer believes, “the company may request the suspension of the employment contract during that day or days with the ERTE mechanism due to force majeure.” In this case, the employer will save wages and contributions for those days. But if the company does not request this suspension, Salmerón warns, “it must pay the salaries as if the workers had come.”

Tags: absence, company, day, equate, Excuse me, get, give back, job, pay, power, salary, snow, stormy philomena, to discount, to get