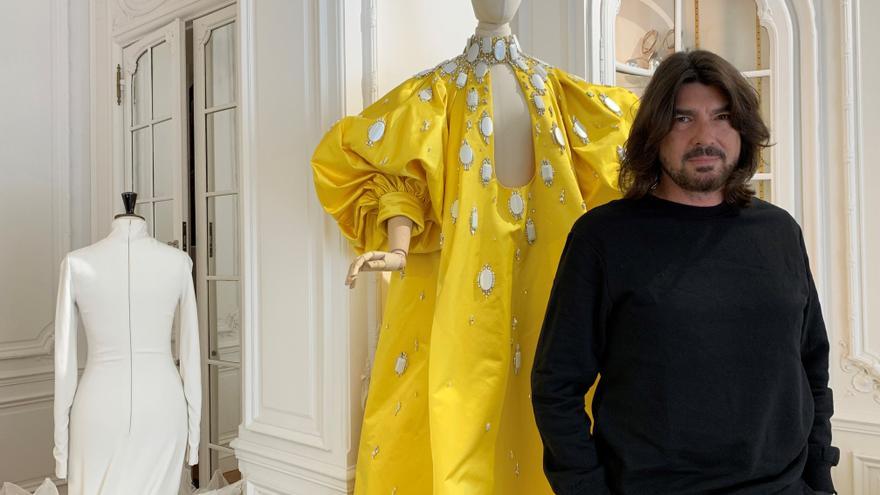 Paris, Jul 6 (EFE) .- French Haute Couture designer Stéphane Rolland presented his fall-winter collection this Tuesday at Paris Fashion Week, with a careful work of rhinestones inspired by the marine world and for which he returned to use his muse, the Spanish model Nieves Álvarez.

“Between Nieves and I there is a story of passion, high fashion, I love being with her. It is not a job, it is a spiritual communion. Nieves is a heart, but she is also a sculpture, that is why I am fascinated by her”, Rolland told Efe in his workshop.

The dressmaker, who began walking at Fashion Week in 2007, noted that when he works with Álvarez, he feels like Rodin sculpting a block of stone. “Only she’s already sculpted,” he commented smiling.

Especially since the pandemic forced brands to resort to a virtual format for their presentations, Álvarez, who always usually opens or closes his shows, has become the absolute mannequin of Rolland, since only she appears in the videos of his last three collections.

The one that served as a sample of this autumn-winter 2021/2022 collection was recorded on the border between the French Basque Country and the Spanish, on a stone dike where the waves of the sea break, a landscape in which the creations of Rolland.

Among them is a spectacular dress whose back and train reproduce the waves of the sea with vertical organza ruffles and a beaded embroidery on the chest by mosaic artist Béatrice Serre.

These ruffles also decorated the train of a long-sleeved, straight, white tunic-type dress.

“Serre makes the most beautiful mosaics in the world for me. Everything he carves in stone, precious stones, marble, works wonders,” Rolland said.

These embroideries include corals, marble, crystals, amber and quartz, and they colored the dresses, wide cut and generous silhouettes, in a contrast of trapeze skirts and rounded volumes at the top.

Black and white were the protagonists of the line, marked by Rolland’s characteristic graphics, along with some introductions of red, yellow and gold to increase the positive energy of this collection.

“It was interesting to work with these colors in a landscape where the tones are lighter, sweeter, more grayish. The color makes it shine, and I wanted Nieves to shine on the rocks of the Basque Country,” he commented in reference to his presentation.

The designer confessed that he wants to meet the public again in a face-to-face fashion show, but acknowledged that this phase has allowed him to experiment and find new ways of transmitting his work.

“You have to know how to take advantage of the moment, despite the difficulties. I tend to get overwhelmed, but I am positive. Making these films has been a good experience, but the parades are an adrenaline rush,” he acknowledged.