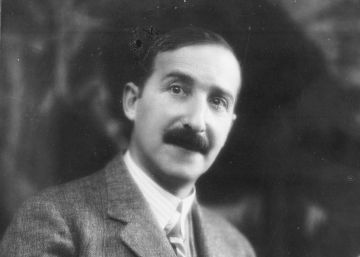 I was a very smug girl. I had decided that, when the time came, I would not read the authors whose books circulated between my mother and my aunts, whom I planned to overcome in knowledge and good taste. In that fifties, Stefan Zweig, with Twenty four hours in a woman’s life, was a long seller since the twenties. Therefore, without taking a look, my resolution was not to read it. Decades passed and my inclination for the avant-gardes made me forget Stefan Zweig completely. His years of incessant circulation through bookstores had passed.

Everything comes in this life, including the repair of acts of pedantry: the good authors support them with a posthumous patience that allows them to exercise, also posthumously, revenge. It all happened without me noticing, because I didn’t look for Zweig to offer him a repair, but he imposed himself on me, while studying (once again) the beginning of the 20th century in Vienna, about the theater of Arthur Schnitzler. But the paths of a literary search are as unpredictable as those of divine providence. In that world that I thought I knew perfectly, I found the belittled Stefan Zweig.

It all started with the reading of Die Welt von Gestern (Yesterday’s world), where Zweig intertwines the autobiography with the chronicle of the city where they spent their childhood and youth. The crossing of the two genres is balanced: neither too much subjectivity, nor too much chronicle of customs, but an exact mixture that allows us to see how a scenario like that of Vienna at the beginning of the 20th century marks the life of a man and the destiny of European art, before the persecution of the Jews raged against that decisive group in the renewal of literature and music. Zweig thus defines the Viennese influence: “Never before so intensely, fortunately and fruitfully, except in Spain in the fifteenth century.”

For years I thought I had an acceptable knowledge of Vienna at the end of the century and I boasted of a question asked by the owner of a pension near the Ring on my first visit to the city: “Do all Argentines know so much about Vienna?” . Reading to Stefan Zweig, 30 years later, I realize that what I ignored was quite considerable. Here comes a fatal question: what if I had not read, albeit belatedly, Stefan Zweig? Question that can be expanded: how many writers do I continue to exercise my ignorance?

What if I hadn’t read Stefan Zweig? Question that can be expanded: how many writers do I continue to exercise my ignorance?

I go back to the beginning: the fact that Stefan Zweig was a best seller read by the women of my family while we were vacationing in the mountains of Cordoba, I banned it for decades. If they had read it, it didn’t seem urgent or necessary that I read it. I was lucky, because Arthur Schnitzler led me to Stefan Zweig. As no one had read Schnitzler in my family before, this Viennese seemed free of suspicion.

Chance is a great reading program: in search of Schnitzler’s plays I went to a German bookstore that is left in a flat in the city where I live. The library is friendly in its relative alphabetical disorder and the few visitors can mess it up without problems. Exercising that right, I found three books by Stefan Zweig: the aforementioned, a little tomito about Freud and the Schachnovelle, which was not intended to read, but I bought guided by those blind orders that arrive who knows where. There is translation into Spanish (Chess novelby Manuel Lobo), but Zweig in Spanish would remind me of the Zweig that I had missed. Therefore, I took the German edition, which had the advantage of being cheaper.

The Schachnovelle It is the last of Stefan Zweig and, if I am allowed the adjective applied to an author who is generally not decorated in this way, the most extreme. Two men linked in a sequence of chess games, aboard a liner that goes from New York to Buenos Aires. The whole novel is an incessant movement of pieces on the board. It seems impossible that this competition between a great chess player and who dreams of beating him becomes exciting for someone like me, who barely knows the name of the teamwork.

The final third of the novel is simply a game. And yet, the suspense surrounding a completely rational game proves that everything can be counted as a passionate struggle of subjectivities and also a class struggle, since one of the contestants is of obscure peasant origin and the other of the Viennese aristocracy. Life has changed both, but not so much that, at the moment when the checkmate approaches, the shadows of the differences between aristocracy and under the people are not stirred. So much fire where, before the first piece moved, there was so much rationality and such refined courtesy at the end of the century.

I was late for Stefan Zweig, and all because my mother and her sisters read it. Too much time was absent from my board in Vienna, the city whose culture I thought I knew almost like that of Buenos Aires. You live discovering such mistakes.