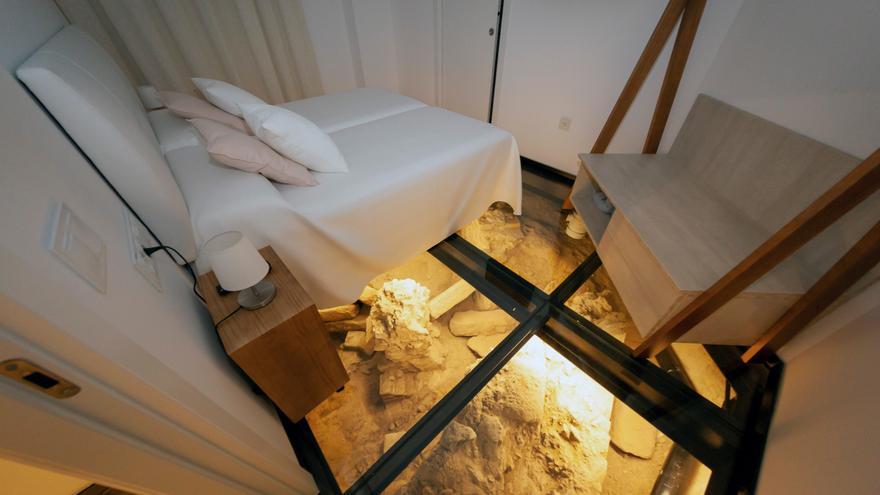 Mérida, Jun 13 (EFE) .- Having a beer on the remains of the Roman wall or staying with Ancient Rome at your feet is possible in Mérida, where the policy of the Monumental City Consortium encourages the integration of archaeological remains in new buildings for the “enormous added value they bring to tourism in the city.”

For Joaquina Cortés, manager of the CM dreams apartments in Mérida, it is literally a dream – “because the world belongs to people who believe in the beauty of their dreams”, as Eleanor Roosevelt said, a phrase with which she herself has decorated a of the rooms of your establishment – open this tourism business, paralyzed by the pandemic.

These are four luxury apartments that are named after the Roman goddesses Diana, Ceres, Minerva and Proserpina, with a patio in which clients can share space with the remains of a thermal complex from Roman times, part of whose elements They have already been integrated into a public square located next to the new hotel establishment.

However, what makes these apartments totally unique, especially the one that bears the name of Proserpina, “the jewel in the crown”, for Cortés, is that all the flooring is made of glass, so that those who stay in it will have literally at your feet to the old Augusta Emerita without even needing to leave the hotel or bed.

Thus, they will be able to contemplate through the glass floor the archaeological remains of the first public extramural baths documented in Mérida and that can be dated between the 2nd and 5th centuries AD.

They will be housed in an apartment with all the comforts of the 21st century, but sharing space a few meters below with a Roman “balnea”, with its “caldarium” and its “hypocausta” system to heat the water, as well as with the dedicated swimming pools. cold water “frigidarium” and warm water “tepidarium”.

If it is taken into account that the current Mérida is superimposed on an exceptional archaeological site that is a World Heritage Site, it is not surprising this coexistence between the past and the present of the city that became the capital of Roman Hispania and currently it is from Extremadura.

For this reason, for the Consortium of the Monumental City and its manager, Félix Palma, although there are quite a few current public and private buildings with integrated archaeological remains, “they are few for which there should be, since they provide exceptionality and added value”, while that their conservation is fully guaranteed, since the establishments have the obligation to take care of them, “logically with our coordination and supervision.”

One of the first public buildings to integrate remains was the Rafael Moneo National Museum of Roman Art, which includes sections of the road that exited through a gate in the city wall and connected with the road to Corduba (Córdoba), through from the eastern necropolis, as well as part of the San Lázaro aqueduct and an imposing crypt with archaeological findings corresponding to the extra-wall neighborhood, with walls of houses that have pictorial decoration next to a funerary area.

The Museum was inaugurated in 1986 and that same year a Roman cistern was also integrated into a block of flats on Trajano Street, in which residents access their homes through stairs built above the site.

The office building of the Junta de Extremadura itself in the center of the city rises on pillars that reveal the Archaeological Area of ​​Morería, of exceptional value, while the regional Parliament or the Alcazaba Cultural Center also have integrated Roman remains.

The Consortium of the Monumental City of Mérida takes into account, when authorizing or not the integration of these, the importance and level of conservation of the excavated archaeological finds, the guarantee of perfect conservation and adaptation, and the fact that “Public enjoyment of its contemplation.”

For this reason, almost 20 years ago it was authorized that the remains of a Roman house in the Galileo Pizzeria were visible through a glass rectangle and more recently other hospitality establishments in the city have integrated remains, such as restaurant A of Arco, with a wall that belongs to the Trajan Arch itself, which gave access to a sacred enclosure dedicated to the imperial cult and dated around the 1st century AD

Also the restaurant La Tahona, very close to A de Arco, has among its tables with remains of the Provincial Forum of Augusta Emerita and the bar La Sureña has part of its glass floor, which allows its customers to be seated above the stones that made up the Roman wall.

The last pharmacy that has opened in Mérida, that of Claudio Barquero Godoy, on Hernán Cortés street, very close to the Theater and Amphitheater, has in its uncovered patio with remains of the wall and the Roman aqueduct, and has placed a Roman “tabula”, found in the excavation, inside the dispensary itself

Its owner, who is not originally from Mérida, acknowledges that the find complicated and made the work quite expensive, but now he feels happy to be able to work in such a special place and not to have chosen to re-bury the remains, which was the other option that was posed to him.

Also, a building on Calle Parejos has a room with Roman paintings and another on Avenida Fernández López preserves the remains of a “fullónica”, which was the name given to shops dedicated to laundry and dry cleaning in the Roman Empire, while the Extremadura Higher School of Hospitality and Agrotourism has integrated part of an alfar with two ovens.

Mérida lives on what was the great Augusta Emerita 2,000 years ago, so the findings are continuous as soon as someone dares to remove their land. That is their problem and at the same time their wealth, a source of opportunities for those like Joaquina Cortés who have decided to make their dreams come true, because, as Virgilio said, “possunt quia posse videntur” (They can, those who believe they can).