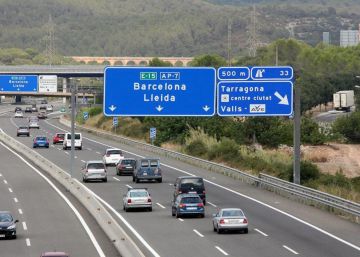 The average toll price of the highways that make up the state network will rise 0.84% ​​from January 1, 2020. The increase will be applied on all highways dependent on the General State Administration, except for the nine that They were rescued by the State when they went bankrupt during the crisis and currently managed by the Ministry of Development.

Seittsa, the public firm that exploits these routes does so through a non-concession contract, so the rise set for concession contracts is not applied, as they explained to Europa Press in sources of Development.

These nine highways, which total about 700 kilometers, are the four radials of Madrid, the M-12 that connects the capital and the airport, the AP-41 Madrid-Toledo, the AP-36 Ocaña-La Roda and the sections of the AP-7 between Cartagena and Vera, and the Alicante Ring Road.

The increase for 2020 will not be applied to two other highways, which, at the end of the year, terminate their concession contract, return to the State and suppress the toll collection. This is the section of the AP-7 between Tarragona, Valencia and Alicante, and the AP-4 between Seville and Cádiz, both currently managed in concession by Abertis. Both follow AP-1 Burgos-Armiñón, which in December 2018 became the first means of payment to complete its concession contract, dismantle toll barriers and revert to the State.

The average rise in tolls for 2020 applies, however, to the bulk of the state network, that is, on a total of 1,270 kilometers of payment routes. This is an increase of less than 1.67% and 1.91% that, respectively, were applied in 2019 and 2018. However, it involves chaining three exercises of increases after the decreases recorded in 2016 and 2017.

The update of the average toll road price is the result of an annual automatic review formula that the sector agreed with the Government in 2002. Among its main variables, the average CPI is between the months of October of one year and the next one that, subsequently, it is weighted according to the evolution of traffic.

The tolls update will take place in full debate on the need to guarantee the maintenance and viability of the State's highway and highway network, which entails weighing the possible articulation of a toll for the use of the expressways.