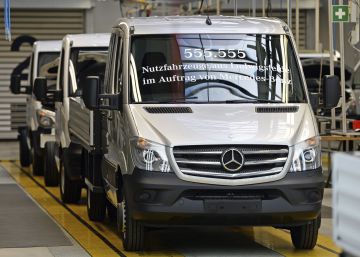 The German automobile agency (KBA) has ordered Daimler AG, Mercedes Benz manufacturer, to call hundreds of thousands of supplementary diesel cars that could be equipped with a trick program, as the manufacturer announced Friday. "We estimate that an amount around six figures (of cars) is affected," Daimler said in reference to the number of vehicles that should be inspected. At least 260,000 "Sprinter" vans are affected by this order in Europe, the company said in a statement, which said that all affected vehicles were manufactured before June 2016. The KBA opened an investigation early October, according to the German media. The agency suspects that Daimler installed an "illicit computer program" in these vehicles to make them appear to be less polluting during laboratory tests than they actually are.

At the end of September, the Stuttgart Public Prosecutor imposed a fine of 870 million euros on Daimler for manipulating the polluting emissions of his vehicles. The decision closed the procedure opened against Daimler, since the company assured after knowing the fine that it would not present allegations, thus also avoiding a judicial process. The Prosecutor's Office argued that the inconsistencies between the actual emissions of nitrogen oxides (NOx) of certain diesel models of the manufacturer and the levels that Daimler had entered on the paper implied in his judgment a "negligent breach of the obligation to supervise the management" . The company thus achieved diesel models to obtain the circulation permit despite not partially complying with the emission limits.

Daimler thus joined other German automakers who have been sanctioned for the scandal of the manipulation of pollutant gas emissions which began in September 2015 in the Volkswagen Group and since then it has been extended to other brands. The investigation in Daimler began with the call to workshops with which the Federal Office of Motor Vehicles (KBA) forced to review 684,000 vehicles, a measure against which the company presented allegations.

The Federal Reserve keeps interest rates intact in the US | Economy

The resurrection of the iPhone leads Apple to record revenue