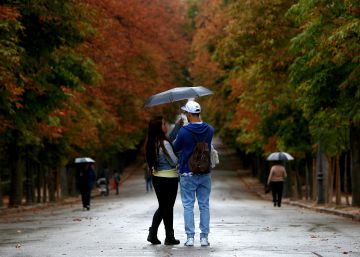 Cities are like greenhouses for plants. The more urbanization, the leaves sprout, the flowers bloom and the fruits bear fruit rather than in the field. Two different studies with millions of observations in cities in the US and Europe also show that the arrival of plant autumn is delayed in urban settings. The explanation is complex: the heat island effect is involved, but also pollution, reduced soil availability or artificial relationships between the species that form in the city.

One of the works uses 11.9 million observations of 250 plant species in almost 20,000 locations throughout Europe. The data, collected by the PEP725 Pan-European Phenology project, date back to 1981 and arrive until 2010. In addition to the average temperature, altitude and latitude of each location, researchers monitored the evolution of the city since then. To calculate the degree of urban change they used three variables and to create an urbanization index: changes in land cover, the degree of impermeability of the soil and a European map of settlements that reveals the percentage of constructed area. All this information arises from Copernicus satellite observation program.

The study, published in Nature Ecology & Evolution shows that the increase in the degree of urbanization advances the appearance of leaves, flowers and fruits. For each fraction of change in the urbanization index, the phenology of the plants is advanced up to 2.8 days in spring and 2.7 days in autumn is delayed. The index starts from a zero value, which would be equivalent to a completely natural environment, and reaches 1, which would be the center of a big city. The advance is occurring in up to 95% of the observations while the delay in plant senescence, the fall of the leaves, is occurring in up to 80% of cases.

"Phenology depends on several environmental factors, with temperature being the most important, but not always," replies in an email the head of the biometeorology group of the University of Innsbruck (Austria) and principal author of the study Georg Wohlfahrt. "We believe that the increase in temperature associated with the urban heat island advances the phenological phases of spring while, at the same time, this increase delays the autumn phases."

The phenomenon of urban heat island is what prevents snow from setting in the center of the cities and that they are cooked in summer. Although the topography of the city, its more or less vertical or horizontal design, the degree of transformed soil or the existence of green areas are involved in the formation of the urban thermal island. But the definitive element is the population density, which explains the temperature difference between the city and its surroundings.

"We see that a potential change in the degree of urbanization from 0 to 100% leads to a temperature increase of 1.4 °," says Wohlfahrt. And the thermal differential triggers the different processes of the plant. But from a threshold, the thermal sensitivity of plants does not grow linearly, so other factors are involved in the advancement of urban spring. Although it is not the focus of this work, the authors mention other variables that are beginning to be studied, such as air or light pollution that would also be altering the natural phenology of plants. Both are attributes of cities. Climate change, as the ultimate cause of the global rise in temperatures, would also have its role by exacerbating urban temperatures.

In the more urbanized environments the leaves sprout up to almost three days before and fall 2.7 days later

The prominent role of population density, as an indicator of the degree of urbanization, is also highlighted in a second work published in the same magazine but with data from the last decade. The research covers more than 22 million phenological observations of European and American cities of 160 plant species. The results show that in the most densely populated cities flowering has been advanced up to 2.8 days, a result similar to that of the previous study. In the case of the fall of the leaves, it is delayed even more, up to 4.3 days in the cities with the highest population concentration.

However, this work finds that the connection between urbanization and phenology is not always the same. Depending on the regional temperature, this connection will be as strong: in cities with colder environments, as would be the case in New York, trees sprout about nine days earlier than in non-urban environments but with the same temperature, Meanwhile, in Jacksonville In warm Florida, flowers are delayed until noon compared to rural surroundings.

"It's not what we expected," says in a note from the University of Florida the main author of this second investigation, Daijiang Li. And he adds: "We know that plants need a signal, a significant change in temperature, so that the leaves sprout. Perhaps in warmer regions, this signal has been erased."