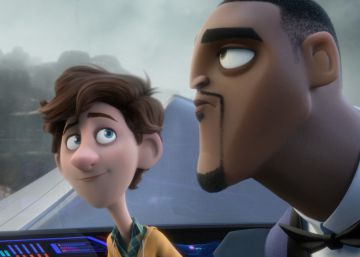 A modest American short filmmaker named Lucas Martell created in 2009 Pigeon Impossible (Pigeon impossible), a nice piece of just five minutes, beautiful designs and somewhat rough animation, with which he won awards at international festivals and that above all served him to fix in his history the animated division of the 20th Century Fox: the producer paid the rights to make a feature film that a decade later has become Spies in disguise, directed by Troy Quane and Nick Bruno, and that has little to do with the original short film except for the presence of the protagonist spy and the secondary pigeon.

Martell, who continues to make shorts and has not even participated in the long, has seen from a distance how the simple but effective story of the pigeon committed to eating the donut of a spy, and that after getting into his cyber case almost causes the Third War World Cup with Russia, it has been transformed into a film about a kind of James Bond that must deal with one of the very young gadget manufacturers for his risky work. The protagonist agent maintains the design of Martell, legs and arms very thin and elongated, disproportionate head, in a singularity that has also moved to the (here) true great character: the weird and corner boy, genius of science in the manner of geeks of The Big Bang Theory, who goes to work at the CIA but which few take seriously. So, Spies in disguise It unfolds as a precious compliment of the peculiarity and extravagance of character in the kids: “How boring the world, schools and life would be without the presence of the weirdos!”

In the original version, Tom Holland gives voice to the boy, while Will Smith not only shows off his usual vocal prodigy playing the spy, but has also transferred his image to the drawing: black race and same facial features. Fresh and deliberately minor in its lack of pretensions, perhaps aware of playing in another league despite the fact that the recent purchase of Fox by Disney has led to it being the almighty house of cartoons who distributes it, Spies in disguise It can be reinforced in a Christmas in which, in principle, it will never be the first bet for the box office.

Looks with pleasure, contains two gags fantastic about the effect that silence and the arrest of time in the cinema can produce, with the right frames to provoke a great smile, and adds a magnificent prologue in which his vindictive spirit is summed up: a few initial minutes starring the young inventor , years ago and still in elementary school, hilarious early genius in the manufacture of defense methods for his mother police.