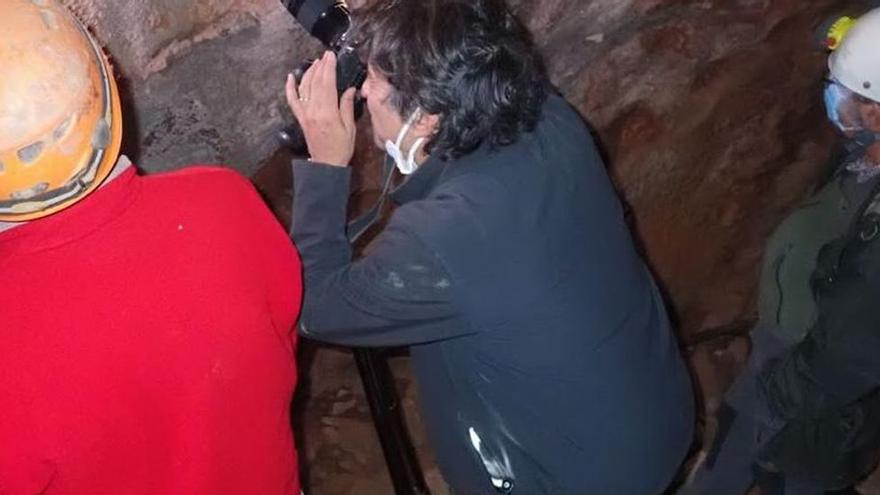 A group of cavers from the Vall d'Uixó, in Castellon, has recently made a discovery of great patrimonial relevance, which could be considered a true treasure of Prehistory. In two of their usual forays into caves in the province of Castellón, they have found two important representations of cave art typical of the Paleolithic. A find that has already been accredited and documented by a team of archaeologists from the Generalitat, given the importance of its conservation.

The story of this news began in June 2020. Two members of the Vall d'Uixó Speleoclub, Joanmi Masip and Hèctor Cardona, entered the Cova de la Penya de Eslida. At one point during their incursion, they identified "a series of very fine parallel lines with other cross lines that completely filled the surface of approximately 1 square meter" on the ceiling of the cavity. In their first assessment, it was not difficult for them to verify that these scratches "form a kind of set of engravings that make schematic figures with angles, scrolls, zig-zags and crosses", although they recognize that "at first sight there does not seem to be any figurative drawing" it was evident that they were not casual marks or formed by the action of nature. They detail about this first finding that "they are on a stone support decomposed by humidity, so they are very fragile".

The second discovery occurred on October 20, 2020. On that occasion, those who entered the Covatilla de Aín were Anna Nebot, Cristina Canós and Joanmi Masip. As on the previous occasion, they saw in one area "a large number of marks that, at first glance, seem to have been made with the fingers of the hands on the ceiling." As in the previous testimony, they emphasize that "they are very fragile, because they are printed on a roof of clayey decomposed stone with the consistency of mud". These paintings occupy an area of ​​more than 10 square meters that "you can see that they have been flattened, then painted in some parts with red pigment, probably ocher, and on top they have been marked with three serpentine scratches fingers". One detail that caught their attention was that "the finger marks are very small, they look like children's".

Aware of the importance of both discoveries and as they usually do in this type of circumstance, the speleologists transferred the news to the archaeologists Josep Casabó --from the Heritage Inspection Service of the Castellón territorial directorate of the Ministry of Education, Culture and Sports- and Rafa Martínez -from the Valencian Institute of Conservation, Restoration and Research-, to certify their suspicions.

And so they did, after a first inspection visit, in which they documented what had been printed in both caves, both Casabó and Martínez certified that they were before "Paleolithic art of great importance, which should be protected and studied". From that visit, they prepared a report to transfer it to those responsible for Patrimony of the Conselleria.

The boundless concerns and curiosity of speleologists, who have given many joys to the world of historical and prehistoric research, led Josep Gilabert, Hèctor Cardona and Joanmi Masip to return to Covatilla de Aín in March last year, accompanied by the archaeologist Josep Casabó. On a more thorough inspection of its interior, they found that there was "new finger marks in other corners, red pigment spots in a stalagmite and engravings of fine and parallel lines in some rocks, similar to those of the Eslida cave".

They describe that the drawings seem to be traced with fingers, in some small cases, so they could be children's. Speleoclub La Vall

The first hypotheses suggest that the find could be a sample of "advanced Upper Palaeolithic cave art, probably from the Magdalenian (13,000 or 14,000 years)". They assure that from this time "in the province of Castellón only 9 examples are known", hence they insist that the importance of this finding "is very great", which is why they stress the need to carry out a detailed study "as soon as the Ministry authorizes it".

The experts clarify that this type of prehistoric artistic expression "is different from Levantine rock art", the majority in the province, and which is located in shallow pools or at the entrance of caves, and is more modern (between 3,000 and 8,000 years of antiguaty).

The caves have been closed preventively and to guarantee the conservation of the discoveries, although cavers who obtain prior authorization from the Conselleria will be able to enter. From Espeleoclub la Vall they defend that possibility because "the collaboration between the Administration and the speleologists is much more profitable and this discovery is proof". In addition, they remember that in 2019, the Speleo Club Castelló, with the collaboration of the Ministry and the Diputación, organized a conference on cultural heritage aimed at speleologists and "since then a few discoveries have been made interesting archeology".