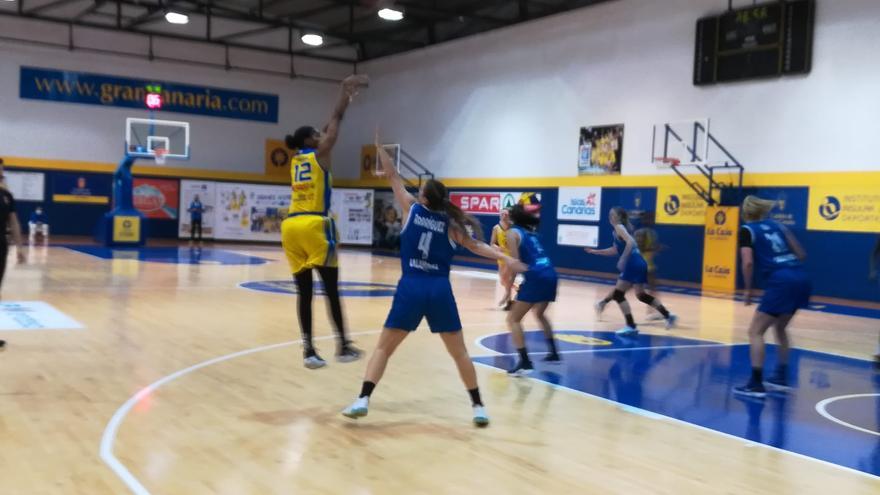 At the conclusion of the match, a score was distributed among the yellow players, with Djeneba Ndiaye as the top scorer with 13 points, accompanied by 10 points and 6 assists from Marta Hermida. For Perfumerías, Nikolina Milic, with 19 points, stood out among hers. In addition to the 11 by Leonor Rodríguez and the 8 by Maite Cazorla in her return to the track that forged them as players.

There was hardly any resistance from SPAR. Despite the fact that the wishes of the local team after returning to the Playoff seven years after their last time went through at least competing with the almighty Perfumerías Avenida Salamanca, the intentions remained in just that, in an attempt to offer an entertaining afternoon to the family of the Canary Islands.

From the first triple of the British Katie Samuelson, The Salamanca cyclone did not stop in any second in La Paterna. The differences between the two groups that met on the floor were abysmal. Not only in terms of greater quality weight in the wrists of the visiting team, made from a checkbook, but also due to one of the great keys to inequality between the teams: the depth of the bench.

José Carlos Ramos can barely count on eight guaranteed players, plus the two juniors who occasionally have minutes in regular phase matches. When Perfumerías raised the difference to 30 points after only 13 minutes played (7-37), seven of Íñiguez de Heredia’s players had already added a basket, while in those at home, only Marta Hermida and Alina Hartmann had managed to score. .

And it is not that the Salamanca coach took it as a formality, which is just what the match in these quarterfinals looked like, which is left with a return clash at the Würzburg Pavilion in the Castilian-Leon province. At each failure of the Salamanca, which were not many in truth, the anger of their coach was enormous.

The Perfumeries the piston did not lower despite the fact that the income obtained in the first quarter already gave more than half a game to the pocket. Not for this reason, neither did SPAR deliver the spoon without even betting on one of those historic comebacks that they have been making during the season, and not only in the games but in the course itself, which they managed to lift with a seven-win streak in the last eight meetings of the Endesa Women’s League, losing precisely to the team it faced during the afternoon.

At the break it was 28-51 in the light. Controlled Sika Koné and Spakle Taylor in the first part of the match, where they could not pass 3 points from the Malian and none from the North American, they were the least outstanding during the regular league those who took a step forward to maintain dignity over track.

Djeneba Ndiaye, despite being blamed on numerous occasions from the technical area for his defensive warmth, is a scoring machine. The dexterity with which he moves on the parquet is worthy of a projection that leads him to shine with a greater presence in the national league, as soon as he improves his performance close to his rim. Proof of this were the 9 points, 5 rebounds and 2 assists that she signed at halftime, being the only one in yellow that stood out among her teammates.

Carla Brito also deserves a special mention. The young Majorera did not shrink despite having the best players in the Spanish league before her, and since Ramos gave her the alternative to make her debut in the Playoff, she did not lose sight of the Salamanca ring. Five points for her in 9 minutes, but yes, the cap that she took from Nikolina Milic in an attempt of three is not going to forget in time.

The Serbian power forward with 14 points at halftime dominated both courts to her liking and her teammates relied on the dominance she presented against the SPAR players. Much more powerful than Kai James in the painting, and more intimidating than Koné. Checkbook matter …

The return after changing rooms was reproduced with a script from those Evening Movies that take you to the depths of the sofa in the living rooms. With a soporific rhythm, after five minutes played they had only scored a partial 4-6. Excessive difference to what was perpetrated during the first quarter in which the torrent of baskets was incessant.

Ramos was also infected with that parsimony, who squeezed his starting five and seemed to forget that he had more players behind him. Until the minute 27 practically did not begin to move the shaker, giving way again to the revulsive Brito, when the scoreboard looked capicúo in La Paterna 36-63.

All that remained for the conclusion of the meeting was translated into one Love and I can not. The Perfumerías had the prey in its jaws and was going to play as it pleased with the faith of SPAR. There were some smiles with 47-73 in the absence of seven minutes for the conclusion in the island environment, but more for the merit of not taking a beating on the scoreboard, than for being able to really put their rivals in a serious predicament.

With all the fish sold, the final measures served more for an exhibition in front of the gallery, than for a level of demand according to a match with something at stake. Íñiguez de Heredia even took the opportunity to give minutes to Inés Santibáñez, one of the pearls that the Salamanca squad keeps in its ranks; while Ramos gave Gara Jorge the opportunity in the absence of sixteen seconds for the conclusion.