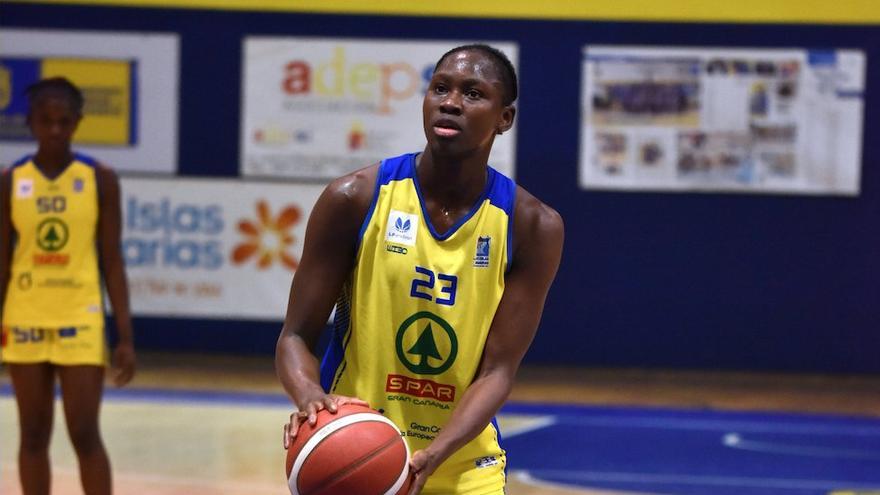 Who would believe at the end of October that the SPAR Gran Canaria he was going to be fighting in the last league games to try to sneak into the league playoff after a start to the competition with six defeats. Now, half a year later, José Carlos Ramos’ team gives itself the pleasure of beating one of the almighty of the Endesa League and adding its eleventh triumph to the beat Lointek Gernika 73-72.

In this way, the insulares are only one victory away from the zone that marks the postseason with the Araski eighth with twelve wins. A dream that the yellow squad can achieve in the absence of two days for the conclusion of the regular phase and that holds a clash against him Cadi La Seu in La Paterna (March 20) and in front of the Casademont Zaragoza in Aragonese lands (day 27).

A triumph that began to be consolidated from the third quarter, when SPAR left the thirteen points for which he lost in the second period (21-34, minute 16) and thanks again to the effectiveness of Sika Koné and her 18 points and 12 rebounds; Besides 22 points from Sparkle Taylor.

The lack of effectiveness on the part of the two teams in the first minutes threw a short marker and a trail of rebounds in both rows. Percentages of less than 25% in the field shots caused that, together with the first command in the score by Lointek, with Buch’s triple to put the 8-9 in the 7th minute, José Carlos Ramos requested the first time-out to also give a little air to their taller players, fatigued by the high rhythm printed on the floor.

The trio Sika Koné, Kay James and Sparkle Taylor supported the insular team in the first period to hold the last of the Basque squad, superior beforehand given their league career and with several international players in their ranks. In this way, although with excessively low shooting percentages, the second period opened with 13-14 on the scoreboard in the La Paterna enclosure.

Lacking ideas the yellow team, abused the outside pitches. Seven triples, four of them from sniper Spain, came off the ring. He had to break stone in the painting if he wanted to follow in the wake of the Lointek.

A question that the team led by Mario López did understand. Balls to Belén Arrojo in the low post to find a highway to the rival hoop. Seven points almost consecutively from the former player of Perfumery Avenida to begin to cement the seventeenth victory of the Euskadi team in their challenge to finish the competition fourth to have a positive field factor.

The Spar survived only with the points of Koné (8), James (4) and Taylor (11) when Ramos returned to request a time-out with the 23-34 that he suffered against the rival dynamics, widely distributed in their responsibilities, with eight players adding points.

The coach from Gran Canaria gave the young Helena Rodríguez to fulfill functions with Marta Hermida in the brand of the base of the Basque team when she gave the Madrid woman some air to open the triple can for SPAR with two consecutive ones and take the doubts to the opposite bench.

The yellow team signed a partial 10-0 with which to get within three of a difference (31-34), until Gomes Collado got four points, his first on the night to take the income to rest seven points up for his team.

Upon returning from the locker room, the pace of play was a little slower. Holding the seven rental points in the first five minutes of the second half, the visiting team controlled smoothly in this section of the game.

The SPAR increased the defensive aggressiveness, which although it loaded it with fouls, with three for Hermida, Ndiaye and Fall, it served to reach 41-44 with which López stopped the reaction from Gran Canaria. Adjustments on the board and the search for victory 14 minutes from the end.

Although he managed to equalize with a triple by Alina Hartmann, practically underused in the second part of the season, Ivanovic took the baton from him and sharpened his aim to score two outside shots to the anger of Ramos and stop the match with 46-52.

Again Sparkle Taylor (19 points) and Kay James (10 points and 11 rebounds) came to the rescue of theirs. Active on both sides of the court, they imposed their quality on rival brands. Above all, James unhinged Gomes Collado by taking fouls from him. With his contribution, 52-53 with six hundred seconds left to play.

It took him three minutes to score in SPAR, but he scored four points in just the blink of an eye to pick up the distance and get within two points (56-58). López in those he was startled with the refereeing trio and he won the first technique of the night.

From unclogging the fourth to signing a 18-9 gap with which to take a comfortable advantage in the absence of 2.25 when Gernika won another technique when López requested a time-out to try to connect his players in the final minutes.

Ramos had to face Kay James’ fifth foul and be in the bonus for the final stretch with an eight-point lead (71-63). Even so, Gernika also added five fouls with which the clash was going to be decided almost at the free throw line.

The Spar seized in the last seconds, in which he only managed to add two more points from 4.60, while Gernika had the ball to take the victory with 73-72 but failed to shoot to the basket and the island team added eleventh victory , the third in a row.

Empresses Leonor and Maite – The Province