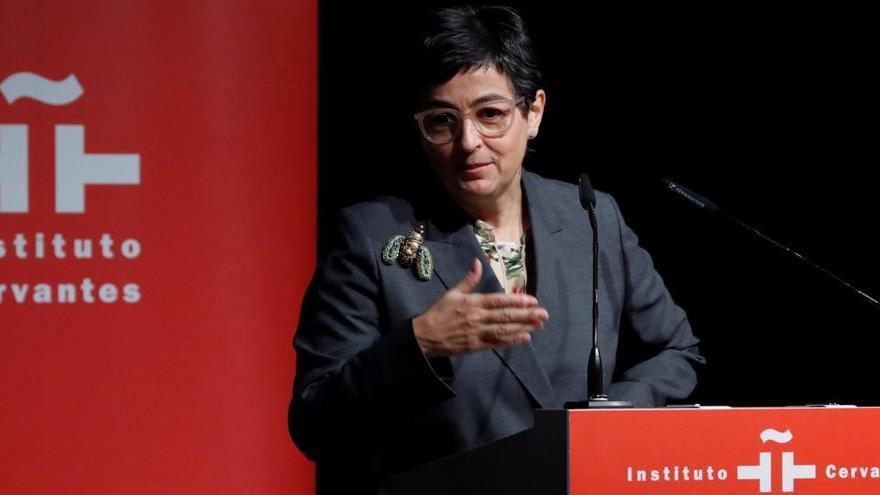 More of 585 million people (7.5% of the world's population) they speak Spanish, five million more than a year ago, data that confirms its upward evolution in the last decade, in which speakers have grown more than 30% and study it 60% more than in 2010.

These data have been released this Thursday at the presentation of the Yearbook of Spanish in the world 2020, an event in which the Minister of Foreign Affairs participated, Arancha González Laya, and the director from the Cervantes Institute, Luis Garcia Montero, and which is dedicated in this edition to the relationship between language and identity.

One issue, that of the connection between language and identity, which is especially important, said the Minister of Foreign Affairs, in a diverse society where languages ​​have to serve "to create community, to unite ". That is why González Laya has opted for "descending from the noise that surrounds us" and opting for a dialogue "in a calm way" about something as important as this relationship between language and identity.

The minister also stressed that the Spanish language "is in excellent health" and it has a great expansion: "Our language is one of our greatest assets" and, therefore, we must ensure that it is one of the relevant sectors in the post-Covid recovery plan, he said.

The academic director of Cervantes, Carmen Pastor, and the professor of the University of Alcalá David Fernández Vítores, author of the report, also participated in the event, who explained that of the total number of people who speak Spanish, almost 489 million are native Spanish speakers, that is, as their mother tongue (six million more than in 2019), and more than 22 million study it as a foreign language. Of this total number of students in the world, the European Union, Brazil and the United States account for 90% of the total.

Regarding its use on the Internet, it is the third most used: 7.9% of users communicate in Spanish. It is the second language, behind English, in the publication of scientific texts. In the last decade, students who choose Spanish as a foreign language has increased by almost 60% and currently a total of 22,329,275 people study it.

Regarding language tourism, they highlight that last year more than 907,000 foreigners traveled to Spain to study it. The predominant profile is that of a woman, over 30 years old, interested in culture.

Fernández Vítores explained how the role of Spanish has been reinforced to the detriment of more established languages ​​such as french and german and how the number of Spanish speakers is expected to increase in the coming decades.

However, in the second half of the century, its relative weight will begin to decrease progressively and in the year 2100 the world population that will be able to communicate in Spanish will stand at 6.3%.

Spanish is also the second most important language in the international arena, it is the third most used language in the United Nations and the fourth in the European Union, where leaving the United Kingdom has benefited the relative weight of the language.

However, the increase in the use of English in the various international organizations diminishes Spanish and the other official languages.

The most studied language in the US

The report also addresses the situation of Spanish in United States, where more than 62 million Americans (18.7% of the total population) are of Hispanic origin. Of them, 71% use Spanish in the family environment and 94% identify as Hispanic, the ethnic minority that will be more represented in the next elections presidential.

Spanish is also the most studied language at all levels of American education.

In 2060, the United States will be the second largest Spanish-speaking country in the world, after Mexico and 27.5% of the US population will be of Hispanic origin.

Regarding the economic weight of Spanish, the report reflects how the speakers of this language in the world have joint purchasing power about 9% of world GDP.

The minister of the Secretariat of Language Policies of Paraguay, Ladislaa Alcaraz de Silvero, also intervened telematically in the act to talk about bilingualism in her country, which, she said, is more social than individual.

The Paraguayan minister stressed that a process of cultural change "from the person to the institutions" is necessary to achieve bilingual practice and has considered that it is necessary to overcome the prejudice against the Guaraní, which is associated with ignorance and poverty.