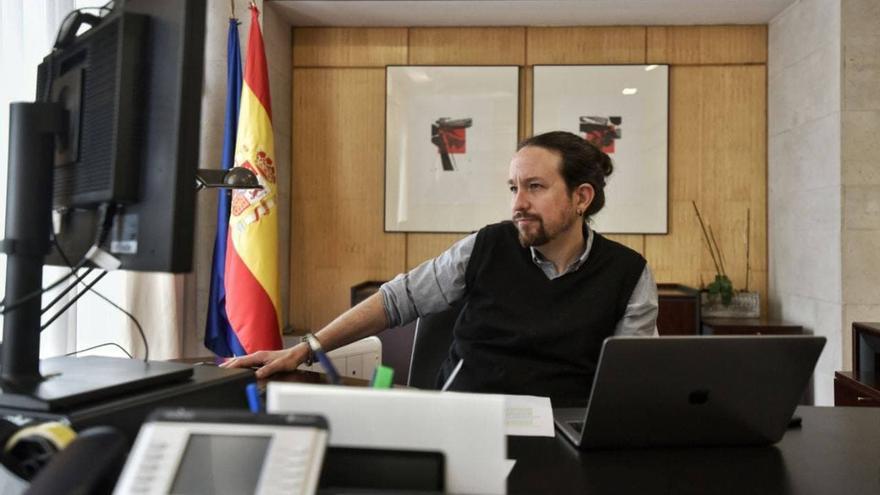 “Spanish society does not accept that members of the Royal House are vaccinated against the coronavirus in Abu Dhabi.” This has been stated by the Second Vice President of the Government and Minister of Social Rights, Pablo Iglesias, in an intervention by videoconference this Wednesday before the Left group in the European Parliament (GUE / NGL), in which he began his institutional political activity after the European ones of 2014. Iglesias has pointed out that “in Spanish society there is a debate about the usefulness of the monarchy that is growing every time that from the Royal House itself they offer new scandals that produce enormous indignation in a very important part of society” .

In this sense, the Vice President of Social Rights has affirmed that “the cases of alleged corruption that affect the former head of State push this debate in a direction with a republican horizon.” Thus, Iglesias has insisted: “We think that our country, economically and in terms of respect for identities, will be better when there is a Republic in Spain and we are going to work so that there is a Republic in Spain, although this bothers sectors of the State profound that they have many difficulties to accept the results of democracy when theirs do not win. ”

With respect to the vaccination of the infantas Elena and Cristina de Borbón during a visit to their father in the United Arab Emirates, lThe Minister of Equality, Irene Montero, assured this Wednesday that “it contributes to the discredit of the monarchical institution” and “makes many citizens wonder about its usefulness.” In an interview on TVE, Montero said that the Government was not informed of the vaccination of King Felipe VI’s sisters and that these types of events, added to the information on the fiscal regularizations of the King Emeritus, provoke “a majority feeling of that there is favorable treatment and privileges “for” an institution that should be exemplary and is not being so.

Montero has assured on several occasions during the interview that he refers to the statements of the Minister of Finance and Government spokesperson, María Jesús Montero, about the actions of Spanish institutions in the face of Juan Carlos de Borbón’s problems with the Tax Agency. The leader of United We Can has not assessed the facts, but has said that “citizens perceive a favorable treatment” and that “if it were another person, there would be no such treatment.”

With regard to the European dimension, at a time when recovery funds (140,000 million for Spain in six years) are expected to face the economic and social disaster of the health crisis, Iglesias has asked to “consolidate the change of course, which is obviously modest and represents the way in which this crisis has been dealt with compared to how the 2008 crisis was dealt with. ”

“I think here we have to be smart and very clear about not allowing the defenders of austerity, who are crouched, to look for an opportunity to re-defend the paradigms and styles of neoliberal policies that were not only unjust in socially and ethically for many citizens, but enormously inefficient in economic terms, “Iglesias said:” That is why it is essential that European funds are put at the service of the social majorities. None of us are naive. We know with whom to negotiate The main problem for the Union is the design of its economic governance, which gives a lot of power to financial markets and large companies and which poses a lot of risks to democracy. That is why I think it is very important that we work for the next Conference on the Future of Europe Building Europe requires a new impetus to adapt it to the current situation and consolidate some of the the achievements made. I was talking to President David Sassoli [del Parlamento Europeo] the other day and I saw in him a very good disposition for us to move forward in the democratic direction with regard to the institutional transformation of Europe. ”

Regarding the advance of the extreme right, which is taking place in countries such as Italy, France or Spain, Iglesias has affirmed: “It makes no sense to suggest that you can be a democrat without being an anti-fascist. And there we need the impulse of a European anti-fascist spirit to remind those in Spain who continue to open up institutions to the extreme right that this goes against European traditions. These people cannot be allowed to be in democratic institutions. This goes against the founding principles of Europe and we need the support of the European antifascists to promote an antifascist sanitary cordon in the institutions “.

In this sense, Iglesias has defended that “when the door is opened to the new far-right forces, the door is being opened to terror and the worst of history, which should not be repeated.” In this context, he has defended that the presence of United We Can in the Government: “It has great potential and great value for all the forces of the left in Europe. We assume the responsibility that falls to us as a political force that is in the government of the fourth economy in the euro area “.