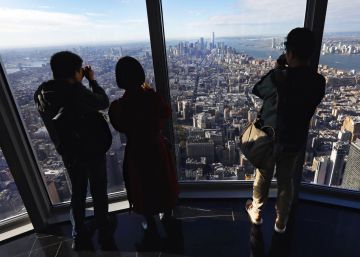 The United States will be the second Spanish-speaking country in the world in 2060, after Mexico. If the projection is fulfilled, for that year there will be 119 million people who will speak Spanish in the country. They will be about one in three inhabitants. Without going so far in time, American Spanish, as some academics prefer to call it, already acts as a free language cities like New York, the place chosen by the Cervantes Institute to present its yearbook. But despite its visibility, it is discriminated against and its future depends on the evolution of immigration. At the ceremony held at the Cervantes Institute in New York to present the Spanish report in 2019, Christie Saint-Vil, of the international affairs office of the City Council, said she is proud to be "forged by immigrants." "It is home to one of the largest and fastest growing Hispanic populations in the United States."

Cervantes projections are based on data from the US Census Bureau. The population of the North American country is around 328.2 million people. 17.8% of individuals define themselves as Hispanic and, among them, 71.6% say they speak Spanish at home. The yearbook notes that there are 41 million people considered to have a native Spanish domain.

This last figure includes both families that define themselves as Hispanic and Americans who, without identifying Hispanic, communicate in Spanish in their homes. To these are added 15.8 million who have a "limited" command of the language. These are Hispanics who abandoned the use of the mother tongue or Spanish students with a low level of knowledge of the language.

Spanish is the most studied language at all levels of primary and secondary education, to the point that it triples to other languages ​​such as French, German or Chinese. Of 11 million students who studied foreign language, more than seven million did so in Spanish courses.

"The margin of growth as a foreign language is still very wide," say the authors of the yearbook. 25% of students in US public schools were of Hispanic origin in 2015. Dual immersion programs are the best contributors to English development in a consistent manner. In the institute there are educational material and study programs aimed at "inheritance speakers". But they lack properly trained teachers.

Basque novelist Kirmen Uribe told how parents had to mobilize to save the dual language program at their children's school. "Why deny that there are millions of people who speak Spanish?" He asked himself, "the world is multilingual. Speaking another language is a gesture of generosity, tolerance and humility." Comedian and writer Guillermo Fesser, who also resides in the US, said "Americans are more Hispanic than they think, but they still don't know it." "They don't see us as competent people, that's where the effort should be concentrated."

Spanish is also considered an economic asset. Hispanic purchasing power, according to the yearbook, doubled every decade in the United States since 1990. Currently, the purchasing power of the community is estimated at $ 1.4 trillion, higher than the gross domestic product of Spain or Mexico, and is expected to approach 1.66 billion in 2021. It doubles the average for Latin America. The Cervantes Institute takes this projection from the Selig Center for Economic Growth.

It focuses primarily on California and Texas, followed by the states of Florida, New York and Illinois. They are the regions in which there are also more companies managed by Hispanics. The study shows that Latino migrants make their way into "new destinations" such as Oklahoma, Maryland, Nebraska and Massachusetts, which did not have a strong Hispanic presence. "The potential is enormous," the rapporteurs say.

Spanish is more than a minority language or a symbol of cultural heritage. It is also being used as a professional asset and the most recent surveys show that its use is widespread on the Internet. It is the second most used language on Twitter in cities like New York after English. In any case, it represents less than 3% of the total messages in the great metropolis of the United States. The growth potential, the report notes, is high.

Cervantes emphasizes that Spanish is increasingly acting as a "long-distance frank language" because it is used by people from different cultural backgrounds. This creates an opportunity, among other things, for the development of commercial content prepared in Spanish. "It increases the chances of advertisers selling their products among the members of this community," he says.

American Spanish has very characteristic features, due to the influence of English and the different variants of the language that coexist in the country. The yearbook includes an article by Kim Potowski of the University of Chicago, which analyzes this process of "linguistic accommodation" and aspects such as the transmission of language between different generations of immigrants. Without immigration, the author warns, "its use would plummet" in part because of the "negative public discourse" towards languages ​​other than English. The triple recommendation to strengthen their presence is to increase dual immersion programs and teacher training, establish collaboration with institutions in other Spanish-speaking countries and greater participation of Latinos in the media.