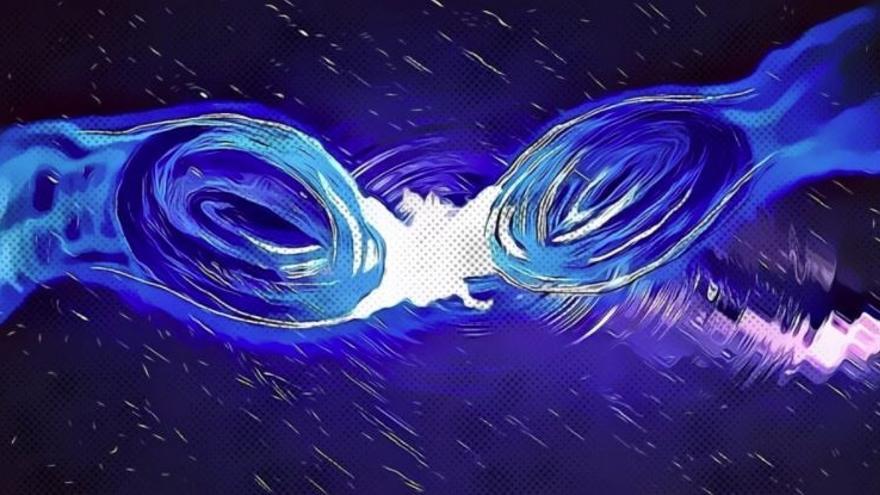 The higher gravitational wave captured so far it may not be the result of the collision of two black holesbut to have a more mysterious motive, the fusion of two boson stars, which would confirm the existence of these objects that can explain the existence of dark matter.

This is suggested by a new study, with Spanish-Galician and Valencian participation, which publishes Physical Review Letters, which offers a new explanation for the origin of the gravitational wave GW190521, detected last September and which left more questions than answers.

Gravitational waves are a kind of "wrinkles" that occur in the space-time fabric of the universe due to events that generate massive amounts of energy, such as the explosion of a star, and that could be detected, for the first time, in 2015, thanks to two specific instruments Ligo, in the United States, and Virgo, in Italy.

The authors of the detection of that gravitational wave attributed it to the merger of two black holes that gave rise to another of 142 solar masses, which would be a kind of missing link between the two already known families of this type of object.

An international team led by Galician Institute of High Energy Physics (IGFAE) and the University of Aveiro (Portugal), in which the University of Valencia, has reviewed that gravitational wave and proposed a new theory.

The origin of the GW190521 signal would be the merger of two hypothetical objects known as boson stars, which are one of the main candidates to form what is known as dark matter, and which represents approximately 27% of all the content of the universe. .

Assuming this type of collision, the team was able to calculate the mass of the fundamental constituent of these stars, a new particle known as an ultralight boson, billions of times lighter than an electron, explains the IGFAE.

The team compared the gravitational wave with computer simulations of boson star mergers and found that these explained the data "slightly better" than the analysis by Ligo and Virgo. The result implies that the source of said signal would have properties different from those originally predicted.

"First of all, we would no longer be talking about black holes, which eliminates the problem of encountering a forbidden black hole," he says. Juan Calderon Bustillo, of the IGFAE and one of the leaders of the investigation.

Furthermore, since the mergers of boson stars are much weaker, the team estimates that this occurred much closer than estimated, so if it had been due to the merger of two black holes, the final result would be an object of 250 solar masses, which would conform to what is known so far .

The stars bosons are almost as compact as black holes, but unlike black holes they lack an "event horizon", the point of no return from which nothing can escape them.

Unlike normal stars, which are made of what we often call matter, "boson stars would be made up of ultralight bosons, which are one of the most plausible theoretical candidates for composing what we know as dark matter ", explains Nicolás Sanchis-Gual, from the University of Aveiro.

Although the team's analyzes are designed to "prefer" a black hole collision, they indicate that fusion of boson stars is "more likely", albeit not conclusively.

"Our analysis shows that both scenarios have similar probabilities, although that of boson stars is slightly more likely", highlights José A. Font, from the University of Valencia.

The scientist considers it "very promising" as current models for these mergers are very limited and they have a lot of room for improvement.

The use of more complete models could reveal more evidence in favor of boson stars and also "allow us to study more gravitational wave signals under this hypothesis."

This result could not only mean the first observation of boson stars, but also that of their fundamental components, a new type of particle known as an ultralight boson.

These bosons have been proposed by many scientists as the fundamental components of dark matter, which makes up 27% of the Universe.

If this result is confirmed by future analyzes of other gravitational waves, "it would be the first observational evidence of the fundamental component of dark matter, sought for decades," said Carlos Herdeiro from the University of Aveiro.