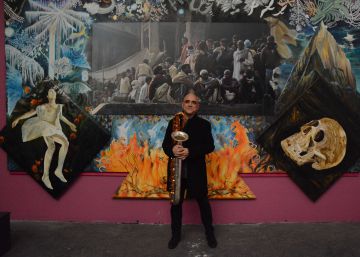 It’s been 14 years since Joan Chamorro (Barcelona, ​​1962), one of the best jazz players in the Spanish school, risked creating the now prestigious hometown Sant Andreu Jazz Band. From an innovative method in teaching this style of music to children between 6 and 18 years old, Catalan has been able to engage several generations in this genre. This tireless promoter of the genre, with more than 50 albums behind him, has collaborated with figures such as Stevie wonder, Sanbeat Parakeet or I drink Valdés. Chamorro arrives for the first time in Mexico City to promote jazz, so unusual among young people, to reflect his successful methodology and to give a series of concerts in Guadalajara and Querétaro with the Mexican saxophonist Gerry López.

After a life of tours, the Catalan musician decided to focus on teaching music. “I wanted to improve all those problems I encountered,” explains the saxophonist to EL PAÍS. The naturalness with which Chamorro approaches young people to this minority musical style is one of the reasons for the success in his methodology. No books, no exams, no pressure of any kind. A technique far from the traditional system that has caused the apprentices to throw in the towel after years of dedication. “When a child arrives you don’t have to think about whether or not you are going to dedicate yourself to music in the future. With motivation we must ensure that they are the ones who want to devote their time to music, ”explains Chamorro. The result has been the consecration of many of his pupils as renowned musicians, as is the case with Catalan singer and trumpeter, Andrea Motis.

The Sebastián Foundation, located in the San Pedro de los Pinos neighborhood, is the place chosen by Chamorro to work. One of his prestigious workshops for apprentices and teachers is about to begin. The space is full of young people with their instruments behind their backs. April Luna does not bring his because it is too heavy. The 26-year-old pianist has toured Japan in search of the perfect methodology to learn music at an early age. “I was learning about the Suzuki model and the Yamaha, which were very cool. Seeing what Chamorro does, in the end they are all similar and lead to the same thing: how to start talking through music, ”he says.

Chamorro appears without his usual hat. The musician says he has been impressed with the jazz culture he has seen in the city. “There are at least 10 or 12 places dedicated to the genre and in the few that I have been able to visit so far I have been surprised by the multitude of people there were and the quality of the musicians,” explains the saxophonist. It also highlights the interest of Mexicans in such a minority genre and with little publicity. “I am aware that there are very good people at the Higher School of Music in the city. They may have to go outside to stand out, but jazz is rejuvenating in many places. ”

Luis Daniel Herca, 20, is one of those students of the Higher School of Music. This Oaxacan carries a guitar and regrets the little development of musical education. “Those of us who are from abroad and want to learn have to move to the capital, leaving the family and with the cost of living outside. They should promote it more, ”laments the young guitarist. Claudia Gutierrez of Guanajuato, at age 20 he decided to move to the Mexico City To study what he loves. When you watch the videos about the Sant Andreu Jazz Band He is even more interested in the teaching he did not receive. “You see children from a very young age doing themselves and playing good music,” explains Gutierrez.

It is not the first time that the Cha Chamorro method ’crosses borders. In 2012, the documentary A film about kids and music shaped the success of the Sant Andreu Jazz Band. A film that received numerous awards in his country, but also received praise from abroad, such as the award for best documentary in Edmonton (Canada), or the award for best feature film at the Austin Film Festival (Texas).

The class comes to an end after just over three hours of videos, tips and lots of music. Missing a few hours for the first concert of the prestigious jazz player in the capital. There are hardly any tickets left. Chamorro, alone in the room, grabs his saxophone and starts tuning it for the gala. The musician talks about coincidences when asked about his love for jazz and his success. The large number of followers throughout the world and their current tour of Mexico, of course, are not a coincidence.