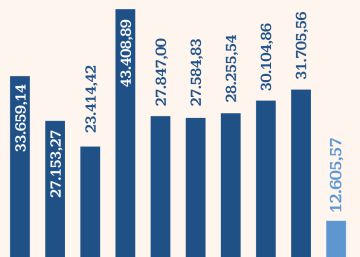 2020 is going to be a black year for shareholder remuneration in Spain, with which one of the hallmarks of the Spanish Stock Market and one of the greatest attractions for investors has been ruined by the crisis caused for the pandemic. Until October, Spanish listed companies distributed 12,605 million euros in dividends among their shareholders, which implies a 50% drop compared to the nearly 27,000 million euros that were paid out a year earlier, according to BME data. That is to say, they would return to levels not seen since 2004. Counting on the fact that the listed companies that are going to pay in the remainder of the year jointly disburse around 2,500 million, the total figure for the year would be around 15,000 million euros, a figure very far from the 31,705 million paid in 2019.

The main cause of the sharp drop in the amount disbursed comes from the suspension of the financial sector dividend, following the ECB’s recommendations for entities to stop paying shareholders this year. With regard to the improvement in dividends in 2021, the market is awaiting the resolution of the ECB, which will be known in the coming weeks, although everything indicates that it will allow the most solid banks to return to shareholder remuneration from January. The vice president of the ECB, Luis de Guindos, recalled this week that the suspension of the dividend is an “extraordinary measure due to the pandemic and temporary.”

But it’s not just banks that stopped paying in recent months. Aena, IAG, Atresmedia, Mediaset, Amadeus or Fluidra are some of the listed companies that suspended their remuneration to shareholders due to the pandemic. In the case of those linked to the tourism sector, this suspension was inevitable.

Others, however, made an effort to maintain the dividend, such as electricity companies. This type of company, which operates in a highly regulated segment and where the elasticity of demand is very low, has been able to maintain the level of income. Iberdrola has been one of those that has kept its payments to shareholders faithful through its scrip dividend formula. The company already has a date for the next election dividend, which will be in February.

Among those that have paid in recent months, Telefónica also stands out. Although this year the operator changed the method of remuneration to the shareholder returning to the scrip. Of the 4,752 million euros that all listed companies distributed in July, 1,065 million correspond to the payment of Telefónica and another 1,500 million to Iberdrola. Inditex, for its part, suspended one of its payments but kept that of November. And many more companies continued to give back to their shareholders: Grifols, Repsol, Ferrovial, ACS, Sacyr, Ebro, CIE, Rovi, Viscofan, Enagás, Red Eléctrica or Zardoya Otis.

Looking ahead to next year, Juan José Fernández-Figares, Link Securities analysis director, explains that “it is difficult to determine at this point what the more cyclical ones are going to do, since I do not expect their results to improve suddenly in 2021 ”. The expert adds that in this case each company will act according to how it sees the progress of its business and the liquidity levels it maintains in balance. “Those who can, are going to pay dividend again since the abolition of it has penalized them on the stock market,” he adds.

The entity resulting from the merger between CaixaBank and Bankia could distribute a cash dividend charged to 2020 after receiving approval from the regulators of the consolidation operation, which will foreseeably take place in the first quarter of 2021 and provided that the ECB lift the veto on the distribution of dividends. And BBVA has ample room to improve shareholder remuneration, after halting the merger with Sabadell.

For its part, Repsol, one of those that continued to pay coupons this year, announced this week, as part of its strategic plan, that after reaching almost one euro per share under the scrip dividend formula in 2020, in 2021 the dividend will be of 0.60 euros per title. This represents a 35% cut compared to the 0.916 euros per share paid in 2020. The amount will progressively increase throughout the plan, until reaching 0.75 euros per share.

Endesa has also updated its strategic plan but maintains its shareholder remuneration. The utility will deliver 100% of its profit this year, 80% in 2021 and 70% in 2022 and 2023. In total, it will pay the shareholder about 4.7 billion in this period.

Coca-Cola EP. The bottling company opens December with a gross payment of 0.85 euros that it distributes on the 1st.

Acerinox. For the second consecutive year, the steelmaker will distribute half a gross euro. It will be on December 2.

Elecnor. One of the classic dividends on these dates is that of Elecnor, which distributes 0.0573 euros per share on the 9th.

Mapfre. On December 22, it will distribute 0.05 euros gross for each title. action on day 9.

Viscofan. Advances to December as an interim dividend part of the amount that in other circumstances would have been distributed in June 2021. It will deliver 1.4 euros per share on the 23rd.

Enagas. The energy company will give 0.672 euros per share on December 23.

Telephone. The date is not confirmed but the operator is expected to pay in December.

Ebro. It will pay out an extraordinary dividend of 1.94 euros on December 28.

Faes. Pays 0.167 euros on January 4 to shareholders who choose to pay cash in their scrip dividend.

“Those responsible for all this should not be campaigning”