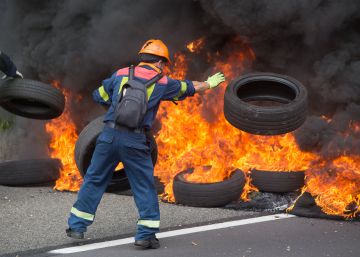 Spanish industry, characterized by problems of relocation, energy cost and competitiveness, is also one of the sectors most affected by Covid-19. The state of alarm caused the temporary closure of production plants and with this temporary employment regulation files (ERTE) were launched for thousands of people. In addition, many companies have taken advantage of the situation created by the pandemic to initiate massive processes of collective dismissals due to a lower workload and after already finding themselves in a critical situation before the health crisis.

The relocation of factories, the lack of investment, as well as the absence of a strong national industrial policy have taken their toll on Spain in recent years. In this context, relevant companies (at least 16) have announced cutbacks this year, leaving more than 5,000 workers in the gorge.

An example is Alcoa. The American multinational aluminum company has presented an ERE for 534 workers at the San Cibrao plant in Lugo. Negotiations with Liberty House (GFG Alliance) end today for its sale and avoid part of the layoffs.

Airbus is another of the large companies that have advanced employment adjustments, pressured by the fall in airline orders. Of the snip of 15,000 jobs globally that will be undertaken before the summer of 2021, 889 correspond to Spain. It will affect 455 workers from the Getafe factory (Madrid), 283 from the Illescas plant (Toledo) and 151 from Puerto Real (Cádiz).

Another sector that has convulsed by the pandemic is that of automotive components. In fact, the auxiliary industry employer, Sernauto, estimates that the sector will lose between 6% and 10% of direct employment this year due to lower demand for vehicles, which will mean a cut of between 15,000 and 20,000 jobs of work.

Bosch announced at the beginning of the month its intention to close the Castellet plant (Barcelona) and the start of a collective dismissal process for its 300 workers. The German firm justifies the closure due to a restructuring of the windshield wiper business of the electrical drives division, for which it has not been able to find alternatives that improve its profitability.

CIE Automotive has reduced its workforce by 4,000 professionals at the end of the first semester, most of them, more than 3,000, due to the non-renewal of temporary contracts in India, whose automobile market was already down before the pandemic. The Bilbao-based corporation maintains a staff of 24,000 workers. For its part, Gestamp prepares an adjustment on a group of 43,000 employees, 6,000 of them located in its Spanish facilities.

Abengoa, several years on the brink of bankruptcy, obtained on Friday the support of its creditors for the restructuring and its rescue is pending from the Junta de Andalucía, which must confirm its financial support of 20 million euros before the end of September. More than 2,500 jobs in Spain depend on it. Duro Felguera, another engineering company, has already requested help from the SEPI bailout fund for 100 million, already suffering from serious financial problems.

Nissan is another of the great losses that the national industry has suffered this year. The Japanese manufacturer had been planning its departure from Barcelona since before the outbreak of the health crisis, but Covid-19 has accelerated its plans. In May it announced the closure of its Zona Franca, Montcada i Reixac and Sant Andreu de la Barca (Barcelona) plants and will leave 2,525 workers on the street. After several months of negotiation, the company postponed the closing of December of this year to the end of 2021, in order for an investor to convert the factories.

To avoid more scares such as those of Nissan, and after verifying that countries such as Germany and France have made aid to the automobile subject to the repatriation of the production of certain models, the employers’ association of manufacturers Anfac claims to the Government that Spain is a country “Friendly” with the sector (10% of GDP and 9% of employment) and calls for “legal certainty” so that the parent companies continue to award new models to national factories.

The Japanese multinational has dragged Acciona Facility Services with it. The Nissan subcontractor in the Barcelona plants has presented an ERE for its entire workforce (500 people), after terminating its contract with the carmaker. Continuing in the automotive industry, the French Saint Gobain wants to close the blast furnace at its factory in l’Arboç del Penedès (Tarragona).

In this way, it has launched an extinction file for 99 workers (out of 122) by justifying that the blast furnace has reached its end of life (20 years) and that rebuilding it involves an investment of 50 million euros, something incompatible with market conditions. In the food industry, the Aryzta group communicated to the unions on Friday its intention to close the plant it operates in Olesa de Montserrat (Barcelona), with 73 workers.

CC OO explained that the company adduces productive and economic causes that it justifies with the decrease in the productivity of the hamburger buns that they make for McDonald’s chain restaurants and the inability to attract new customers. According to the agri-food employer, FIAB, provided to CincoDías, after six consecutive years generating employment, the sector could lose between 4,000 and 11,000 jobs and 800 companies, mostly SMEs, due to the pandemic.

Euskadi is one of the communities with the greatest impact of the industry on its GDP. Specifically, factories contributed almost 25% of the wealth generated before the outbreak of the pandemic.

ITP Aero, in the aeronautical sector, will lay off 600 employees from a staff of 4,000 professionals. The Rolls-Royce subsidiary has told the unions that the Zamudio (Bizkaia) plant and the Ajalvir and Alcobendas plants in Madrid will lose 319 people, with which more than half of the adjustment will be concentrated in Spain.

In the same sector, Aernnova will send 950 people out of work, most of them 650, in Spain. The list goes on for Aciturri. Its rearrangement will take 214 jobs ahead. The adjustment reaches the center of Miranda de Ebro (Burgos), where the headquarters of the group that Ginés Clemente founded is located. Up to 107 layoffs in the city of Burgos, followed by another 90 at the Boecillo plant (Valladolid). Another 17 new unemployed will leave Berantevilla (Álava) and Tres Cantos (Madrid).

Alestis, 74% owned by Aciturri, has a workforce of 1,370 workers and the ERE presented includes 585 layoffs. The engineering company Sener, with a division dedicated to the aerospace sector and which sold ITP Aero to Rolls-Royce, has also reported 90 layoffs.

Covid-19 and competitiveness problems have also impacted steel mills. The seamless tube manufacturer Tubacex will cut 500 jobs, a quarter of the workforce of the Llodio corporation (Álava) and of which 150 will be produced in Spain. Its competitor Tubos Reunidos has yet to announce its plans. At the moment, its 1,350 workers are covered by an ERTE that will extend, for now, until October 31.

“The production of the Spanish steel industry has fallen by almost 18% in the first seven months of the year, an unsustainable collapse that will last in the coming months and which may end up affecting employment. For steel companies, whose investments reach levels of billions of euros, working at this rate would be very difficult to maintain in the long term, “the general director of the Unesid association, Andrés Barceló, tells this newspaper.

On the other hand, from the refining and oil employers, AOP, they assure that all the companies in the sector have made a “huge effort” not to destroy jobs during these months, despite “unprecedented falls in demand.