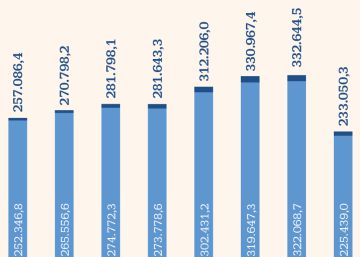 In the midst of the generalized economic disaster caused by Covid-19, there is an activity that is breathing and that of export. Exporting companies have suffered like all of them and 2020 will be reduced compared to 2019, but the balance has not been as negative as in other sectors.

In the first 10 months of the year, Spanish exports reached 213,683 million euros, 11.9% less than what was achieved in the same period of the previous year, according to the latest data from the Ministry of Industry, Commerce and Tourism. Despite the decline, logical if one takes into account the slowdown in world activity in spring (in (Spain sold abroad in April only 13% of what is usual), the export sector is one that is recovering with greater strength.

This recovery began in July. The following months continued to grow continuously with respect to the previous one, although with less volume than in the same months of 2019. When the October data arrived, the last known ones, the Secretary of State for Commerce, Xiana Méndez, declared that “it continues the progressive recovery of exports and imports, which grew compared to September and are approaching their level of a year ago. This shows the export drive of Spanish companies and the solidity of our foreign sector ”. In Funcas they share this approach and their senior economist, Mª Jesús Fernández, attributes the export recovery “to the competitiveness of Spanish companies” and to the internationalization process that they have been carrying out successfully for years.

The pace is higher in exports than imports. From January to October, purchases abroad decreased by 16.7% in relation to the same period of 2019, to 225,439 million euros. As the recovery of exports is faster, the trade balance deficit has dropped by 58% compared to that registered from January to October 2019 and the coverage rate -the ratio between exports and imports- stood at 94.8% .

The sector that has increased the most sales of products abroad has been that of food, beverages and tobacco. Another of the export sectors par excellence, the automotive industry, has suffered a decline from January to October, but nevertheless gained momentum again in this last month. The Anfac employers’ association points out that, in November, foreign sales grew by 9.9%, above what the production grew, which is being stimulated by European markets given the fall in internal demand in Spain. With the results of the last months until November, the accumulated figure for the year has reduced its decrease by three percentage points and stands at -17.8%. The automotive industry continues to be one of the main engines of Spanish exports. Pharmaceutical items and household appliances are also sectors with good prospects.

On the opposite side, there are others such as capital goods, energy products and textiles that have not managed to trace their sales abroad.

The autonomous community with the most exports until October was, according to the Ministry of Industry, Commerce and Tourism, Extremadura, where sales grew by 3.1%, due to the fact that agricultural products have increased the most. However, the Canary Islands, with a drop of 31.7%, the Basque Country (-19.2%) as capital goods fell, and the Balearic Islands (-17.8%) were the most affected.

The foreign destinations of Spanish merchandise continue to be led by European Union countries such as France, Germany and Italy. In the first 10 months of 2020, exports to the European Union fell by 9.3% year-on-year and to the euro zone by 8.6%.

The Spanish situation with regard to export activity has been very similar to that of the rest of the industrialized countries. In fact, the only country that saw its exports grow in the first 10 months of the year was China and very little, 0.5%. In the euro zone, activity decreased to -11% and in Europe of 27, -10.2%. In France, exports fell more than in Spain, by -18.4%, as in the United Kingdom (-16.3%) and Italy (-12%). The United States and Japan have suffered the same fate, with falls of 14.5% and 13.1%, respectively.

Despite the recovery observed in activity, the economist Mª Jesús Fernández warns that exports of goods and services will close the year 2020 with a decline of -21.1%, in line with the general progress of the Spanish economy, of According to the most recent consensus of the Funcas Forecast Panel, held in November.

However, and precisely because of the power of activation that the export sector has and the “gain in competitiveness that Spanish companies have experienced in recent years”, according to Fernández, the same Panel predicts a growth of 12.7% for this year of 2021 at its medium consensus.

Less than average. Spanish companies are less pessimistic than the average for the European Union and the euro zone regarding the evolution of their businesses in 2021 thanks to the boost from the export sector, although they continue to be negative (-1.4 points). This is clear from the 2021 Business Outlook Survey, prepared by the Chamber of Spain among 2,274 companies.

Four indicators. The Survey asks companies about the evolution of four indicators: national sales, employment, investment and sales abroad. Spain tops the list of the most positive expectations in relation to exports.

Conditioning factors. Regarding the conditions that will most influence business activity, 63.3% of the companies consulted answered that labor costs and 50.8% that the debt accumulated due to the pandemic. In this last aspect, the pessimism of Spanish companies is double that of European ones.