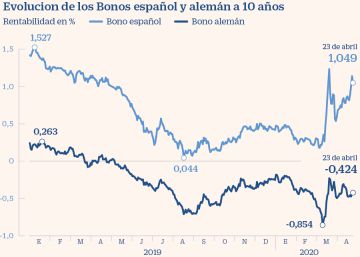 The debt market has become a thermometer to measure the impact of the health crisis on the economy. In addition to the activity of investors in the secondary market, in recent weeks there have been operations carried out in the primary market by both public and private issuers. Here the Spanish Treasury has been especially prolific. Among short, medium and long-term issues, Spain has raised 65,850 million euros in a month and a half, 55,552 million since the state of alarm was declared.

To the auctions that were scheduled, two syndicated placements are added, with which it has sold 25,000 million. In other words, 38% of the total amount awarded since March 1. He made the last one this week with the sale of a 10-year bond.

The intensity of the appeal to the market is part of the Treasury’s strategy to attract resources with which to meet the financing needs derived from the economic crisis of the Great Confinement, which will increase the deficit to close to 10%, according to the IMF . Since Covid-19 was declared a pandemic, the body headed by Carlos San Basilio has accelerated debt issues and so far this year it has sold 117,177 million euros, 59.6% of the planned gross issue, in principle , for the whole of 2020 (196,504 million). For its part, the estimated net issuance at the beginning of the year was 32,500 million, but it will eventually reach 100,000, according to Goldman Sachs.

This hyperactivity has been accompanied by an increase in the cost of financing new operations, a reflection of the increase in profitability in the secondary market, where the Spanish 10-year bond has gone from 0.3% from the end of February to 1 %. The theoretical cost has tripled by that time. This rise has led to references such as the nine-month and one-year letters having returned to positive returns. In other words, the Treasury stops charging for selling debt for that term.

In addition, returns to other terms have soared since the beginning of April, coinciding with the paralysis of the economy. In the auctions held in the last four weeks the result has been the same: higher rates. The good news is that demand has not fallen. As could be seen in the syndicated issue on Wednesday, the 10-year cost rose to 1.36% compared to 0.525% of that made in January, but this is less than the 1.45% paid in January 2019. Demand recorded a record $ 96.5 billion, for both a public and private issuer and for a single reference. This appetite was felt in the syndicate carried out by the Italian Treasury the day before and in which demand reached 110,000 million for two tranches: at 10 and 30 years.

“Demand in the Italian and Spanish unions was strong, but it is largely due to the attractive new emission premium and the intervention of the ECB,” Antoine Bouvet, senior strategist at ING, told Bloomberg. The ECB has accelerated the acquisition of assets after activating the 750,000 million emergency purchase program, but this is not enough to contain the returns. The fateful prospects and problems for the euro zone to reach agreements give rise to higher rates.

Emissions. The Treasury is accelerating its placements with the aim of having margin to raise the emission target and capture resources with which to face the economic consequences. The rest of the countries of the Old Continent have deployed a similar strategy. Now his goal is to have a powerful fund to finance expenses at a time when public spending is going to be greater and income generation is less.

Minima. Despite the increase in returns and the risk premium has risen to 154 basis points, the highest since Brexit, the average interest rate of outstanding debt stood at 2.133% at the end of March, around historical lows . The bad news is that this price will suppose a floor that will not be touched again, predictably, in many years.