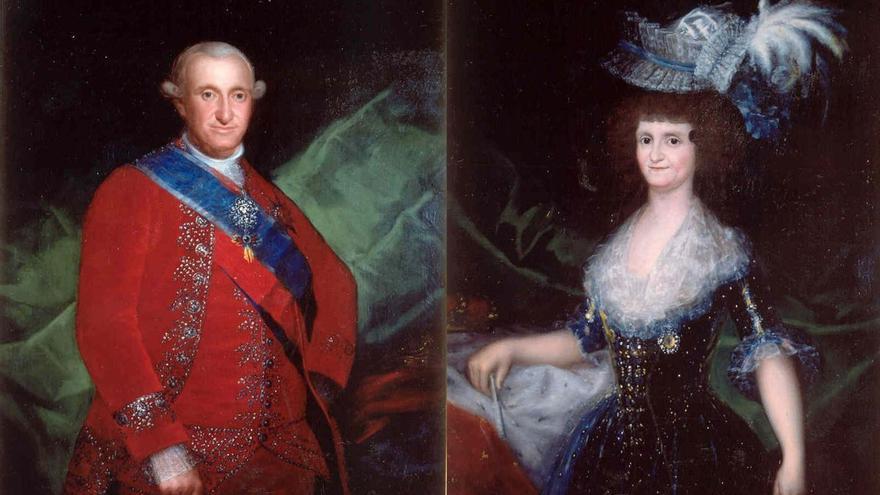 The Provincial Court of Madrid has passed a ruling that marks a milestone in a decades-long controversy between the State and Altadis (the heir to Tabacalera). Justice has determined that two portraits of Carlos IV and María Luisa de Parma painted by Francisco de Goya that the old public company has been in custody since 1789 are publicly owned. The paintings were for decades in the room where the Board of Directors met of the company and in the litigation papers from up to 1896 have been dusted off. Culture did not want to comment and Altadis insists that the property is in litigation until the Supreme Court decides because the ruling of the Madrid Court is “incongruous and contains intrinsic contradictions hardly salvageable “.

In June 2019, a Madrid court handed down a sentence that is like a history class. In the background, he begins by explaining: “The colonization of America meant the introduction of tobacco in Europe, being decreed by the Crown gender stagnant at the beginning of the 18th century, and its exploitation implemented by leasing commercialization rights to individuals. Faced with the failure of this model, he decided to directly take over the management and, gradually during the 18th century, the administration and exclusivity of tobacco production was granted to the Royal Tobacco Factory in Seville ”.

During the coronation of Carlos IV, “the Royal Factory threw itself into the festivities and organized a montage of ephemeral architecture where works of art were exhibited. Among these were a couple of royal portraits that the Royal Factory commissioned Goya and, in exchange for 4,146 reales of fleece paid by the employees, executed the paintings. After the 1789 festivities, the Portraits began to adorn the premises of the Royal Factory of Seville “until in the 19th century” they fell into oblivion. ” In 1887, an inventory indicated that the company possessed “eight oil-painted portraits of kings with gold frames” but without mentioning that they were by Goya.

A decade later the State asked back the paintings. In theory they returned to public hands on March 20, 1896. In theory, because in practice the two ‘goya’ stayed at the Tabacalera headquarters in Madrid. The detail is important because until then they were in the Royal Factory of Seville, which belongs to the State, unlike the headquarters of the company.

The sentence explains that it is not clear what happened. “Most likely, since they were hanged at the CAT headquarters [antecesora de Tabacalera] possessed them as owner, because the Ministry of Finance considered the twelve portraits of kings of little value since it did not know their authorship and, either rejected them, turning them into an abandoned thing, or alienated them to the CAT, without unfortunately being recorded documentary, it being unlikely that after delivery the CAT would steal or steal them ”. It was no secret. The paintings “adorned the boardroom of the headquarters, in view of the president of the CAT who was appointed by the Government, the controller and other representatives of the State.”

The Royal Factory commissioned Goya and, in exchange for 4,146 reales of fleece paid for by the employees

In 1946, CAT became Tabacalera and took over the property. In 1985, a receipt issued by Goya appeared in the Tabacalera archive and interest in the canvases was reborn. The Prado Museum confirms authorship and a legal report from the State maintains that they are publicly owned.

The discovery coincides with the entry of Spain into the European common market and the end of the tobacco monopoly. Spain then creates a company to which it contributes goods in exchange for shares. But it already makes it clear that “the portraits were not within the assets that were going to be contributed in the capital increase and that they had to be handed over to the state”.

Tabacalera counterattacked with a report in which he claimed that the portraits were his, either for a purchase or for the passage of time. The State in some way accepted it as good “and requested permission from Tabacalera to exhibit them, to which it agreed, so that in this way the State recognized that they were not its own.”

Thus, for decades the paintings have been exposed to the public in Seville. In 1999, with Mariano Rajoy As Minister of Culture, he signed an agreement whereby the State could go on exhibiting the works. In 2007, already with Shoemaker in the Government and with the company privatized under the name of Altadis, it decides not to renew that agreement. In November 2015, Altadis claimed the Goya back and the State replied that they were his. He handled a new report according to which “the portraits were within the assets subject to the tobacco monopoly and therefore neither CAT nor Tabacalera ever owned them as owner. He maintains that they are part of the Spanish Historical Heritage, so there was no room for their alienation by the State ”.

Altadis went to court. A case with centuries-old roots was prosecuted during the government of Rajoy himself, already promoted to Prime Minister. Four years later, Judge Eva Ramírez García dismissed Altadis’s claim. In that first sentence, he points out that Altadis does not have documents that prove the ownership of the paintings and only that over the years he managed them. “It seems more reasonable to think that the paintings were simply owned by the lessee to adorn the buildings under her charge, but not as the owner.”

And it adds the jurisprudence of the Supreme Court according to which “Only the possession that is acquired and enjoyed as the owner can be used to acquire the domain, so a tolerated possession is not.”. “It can be considered proven that the Portraits traveled to Madrid by virtue of the Royal Order of 1896 mentioned so many times, and that later in 1921, according to the inventory of that date, they were in the Ministry of Development. At some point later and, given the existing relationships between the State and CAT’s senior management personnel, they were handed over to the latter for use as adornment, the exact date of such delivery being unknown and the exact place where they were hung is unknown. , both their representatives and those of the State being aware that this surrender was for purely possessory purposes, without transfer of ownership and with an obligation to return ”.

Altadis was not satisfied and appealed to the Provincial Court of Madrid, which last February ratified the sentence of first instance. The Goya Foundation, for example, still places them on its website as company property. When mentioning the couple of portraits, he points out: “They were moved to Madrid at the end of the 19th century as the property of Tabacalera Española and, in 1999, they became the Altadis collection. At present they are preserved, temporarily loaned, in the General Archive of the Indies of Seville ”, where they are exposed to the public.

The tobacco company insists that “it is the legitimate owner of the paintings”, and maintains that since Goya painted them commissioned by the Seville Tobacco Factory, the paintings have always remained in his possession, “first in the Seville Factory itself. , then in the Boardroom of the Tabacos Tenant Company (Tabacalera’s predecessor) and from 1944 onwards at the headquarters of Tabacalera SA (today called Altadis SA) “.

Altadis, owned by Imperial Brands, owns tobacco brands such as Fortuna, Ducados and Nobel, points out that “the State has always recognized Altadis as legitimate owner of the paintings “ and wields as proof that “Since the beginning of the 90s, the Ministry of Education has been requesting Altadis, as the owner of the paintings, to lend them to it for various traveling exhibitions of Goya’s work in various European countries “.

Imperial Brands, founded in 1901 and headquartered in Bristol (United Kingdom), produces 320,000 million cigarettes per year – it is the fourth largest producer in the world after Philip Morris, British American Tobacco and Japan Tobacco – and is present in 120 countries , employs more than 27,500 people and is listed on the London Stock Exchange. For the multinational, the proof that they should be his is that in 1999 it signed a free loan contract with Cultura in which “Altadis, as the owner of the paintings, gave the paintings a free loan to the Ministry” for temporary exhibitions, which included “the written commitment of return by the Ministry as soon as Altadis claimed them”. And he adds: “That commitment was not fulfilled by the State and after the exhibition that was organized in the National Library called ‘the last voyage of the Mercedes frigate.” Then, Altadis demanded from the State the return of the paintings and this, he affirms, never complied.

Altadis insists that it is impossible for the Ministry to sign this contract by mistake “on no less than two paintings by Goya.” The company considers that the Hearing agrees on that point by considering the contract valid but criticizes: “However, it is not able to extract the logical consequence of such a statement: if the contract is valid and the Ministry did not suffer an ‘error’ when to subscribe it, it is evident that the State recognizes the legitimate property of Altadis on the pictures “. For everything, she qualifies her resolution as “incongruousIt contains intrinsic contradictions that are difficult to overcome. “It will continue in the Supreme Court.