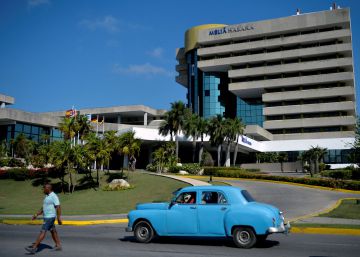 The Government has informed Spanish companies with interests in Cuba that it will reject legal claims that come from the United States for the Helms-Burton law. The Ministries of Foreign Affairs, Justice and Industry convened on Wednesday 16 companies affected by the conflict. Under a European regulation that renders the resolutions of courts that make that law effective, the Government will not receive notifications of lawsuits or subpoenas against Spanish companies, whether these are addressed directly to those affected or if they go to the Spanish courts or the Ministry of Justice.

It's been a long time since the employer had asked the Government for help in a conflict that can have a millionaire cost for hoteliers, banks, travel companies and other companies based in Cuba. The Donald Trump Administration unleashed the conflict last May, when it decided to enter into force a rule (the Helms-Burton Act) that had been suspended since its approval in 1996. According to it, any citizen of Cuban origin can claim in court United States properties that were confiscated in the wake of the 1959 Castro revolution.

Now, the Spanish Government offers companies a way that allows European legislation in decisions that are considered to be a detriment to their sovereignty. Among those convened by the Secretary of State for Commerce were Iberostar, Meliá, BBVA, the Garrigues office and the CEOE, according to business sources.

The EU Blocking Statute rejects the effects of the Helms-Burton law in any Member State. It was approved in 1996, the same year as the adoption of US law, to protect EU operators from the extraterritorial application of third country legislation. With this regulation, the EU leaves without recognition the extraterritorial application of legislation whose effects it considers contrary to international law. The Spanish Government is now based on that regulation never before used to respond to its companies.

The European standard protects EU operators through two mechanisms: it allows the effect of any foreign judicial decision based on the Helms-Burton law to be annulled and opens the way for affected companies to obtain judicial redress for damages arising from extraterritorial application of this legislation.

The CEOE had already addressed the European employer, Business Europe, to claim support from the European Union. He had also turned to the Spanish ministries of Foreign Affairs, Industry and Presidency, as well as the United States embassy in Madrid and the Spanish embassies in Washington and Havana.

In May, the United States decided to enter into force title 3 of the Helms-Burton Act, suspended by all US presidents since 1996 in a decision that used up a last cartridge to drown the Cuban regime. The successive US administrations prevented its entry into force during the last two decades so as not to dynamite relations with a partner of the size of the EU. Until Trump arrived.

After this decision, the EU warned that it would retaliate to defend the rights of its companies. Last May, the then high representative of the EU's Foreign and Defense Policy, Federica Mogherini, said that the Twenty-Eight would resort to “all appropriate measures,” including the use of the World Trade Organization (WTO) and shielding of their companies through the EU Blocking Statute.

The application of title 3 of the law passed in 1996, said the head of European diplomacy, implies a "violation of the commitments made" between the United States and the EU in 1997 and 1998. US law especially threatens the interests of companies Spanish, especially hotels, with activity in Cuba.

Shortly after the crisis broke out with the United States, the acting Minister of Industry, Commerce and Tourism, Reyes Maroto, traveled to Cuba. There, Maroto met with representatives of the Spanish tourism industry, with an important presence in the country, and those who the entry into force of the Helms-Burton law punished especially. In Varadero, the minister visited Spanish hotel chains with a presence in that area. In November, the president of the Government, Pedro Sánchez, also visited the island, where he opened a business forum at the Gran Packard hotel, managed by the Spanish chain Iberostar, included by the US in its black list of entities on the island.

The great risk involved in the step taken by the Trump administration is that it triggers an avalanche of legal claims on both sides of the Atlantic. At the time, the US government estimated that reviving Title 3 of the Helms-Burton Act would open the door to some 200,000 cases, according to Reuters last April. The lawsuits filed, until May inactive because the rule was not in force, were around 6,000.

The decision of the Spanish Government not to attend the claims of the United States against Spanish companies with interests in Cuba arrives days before the controversial trip of the kings to the island, from November 11 to 14. The Government has already held meetings with managers of the large Spanish companies with interests in Cuba to prepare this trip.

The visit of Felipe VI, which will be held the day after the general elections, is due to the celebration of the fifth centenary of the Havana Foundation and his announcement was received as “good news” by businessmen with interests in the island Caribbean "It's the best news they could give us," Efe Xulio Fontecha, president of the Association of Spanish Entrepreneurs in Cuba, told the agency a few weeks ago, following the announcement of the Ministry of Foreign Affairs. Already last November the President of the Government, Pedro Sánchez, was in Cuba.