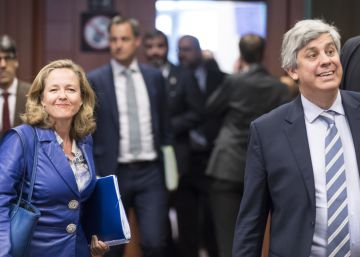 Still there is not a candidacy of Spain to direct the IMF, say official sources of the Ministry of Economy. The Acting Economy Minister was ambiguous on Wednesday. In an interview with Cadena Ser, Calviño was questioned about whether he had talked about the IMF position with President Pedro Sánchez. He answered yes. "Has Sánchez told you if he is going to apply?" They asked. "It is that the conversation has not been raised in those terms," ​​he replied after a prolonged silence. On two occasions, Calviño said that it is a process that has just been opened and that we will have to wait and see how it develops.

According to government sources, the strategy that Spain will play will depend on the names that are presented. He will wait to see which ones are thrown into the conversations and what supports they collect. And if he considers that there is a clear opportunity, he will apply to Calviño. On the night of Wednesday, Moncloa was pleased that the name of the minister emerged in the talks of the G-7 meeting in Chantilly.

According to these sources, the current minister has a profile with many strengths for the position. Other women do not sound after Margrethe Vestager is going to be vice-president of the Commission, and Kristalina Georgieva, current CEO of the World Bank, exceeds the age limit. In addition, Calviño is accustomed to fajar in the corridors of the European institutions. After years as a senior civil servant in the Commission, where she became director of Budgets, she is considered very capable and solvent, a product of the economic orthodoxy of Brussels. During her tenure as minister, an image of tenacity and rigor was forged in the Eurogroup. But at the same time it combines that technical level with a social concern that comes very well to an IMF that is moving towards a small revolution: of managing the Great Recession to try to seek a more inclusive recovery that moves populisms away.

The virtues of Calviño are many. Against him he plays that has not been a full year as minister. That he does not have so much experience at the highest international level. And that is somewhat reluctant to expose themselves to the media. Until he takes a step forward, it is not clear what support he will have. So we will proceed with caution.

Spain already had former Vice President Rodrigo Rato at the head of the IMF, now in jail. In general, the government chooses any international position, especially when it comes from a period in which the crisis lost much institutional weight outside. Now it is necessary to recover it and it is part of the state image communicated by Sánchez. Spain has returned to the international scene, as shown by the negotiations of European charges, they say. But neither wants to wear down the minister, as happened with the failed attempts of Luis de Guindos to chair the Eurogroup.

The situation is not unfavorable either. Germany and France have already split the Commission and the ECB. The United Kingdom and Italy have lost weight in decisions. After Lagarde formalized his resignation from the IMF, the Twenty-eight want to accelerate the search for a consensus candidate not to lose that share of power that Europe has maintained in the body since its founding. The EU partners have so far had informal contacts. Finance holders from France, the United Kingdom, Italy and Germany, who participated on Wednesday at the G7 in Chantilly, addressed the relay.

Last week, the ministers conspired in the Eurogroup to explore options to take to the Heads of State and Government, which will have the final say. Its intention is to propose a single candidate with the consent of the Twenty-eight so as not to generate a competition within the EU. Coordinating this work will be entrusted to the rotating presidency of the EU, which occupies Finland, and the head of the Eurogroup, the Portuguese Minister Mário Centeno.

In that meeting no names were raised, but candidates are already circulating among the capitals. Despite the absence of a closed list, several profiles are being considered in Brussels and some have been discarded. Two considered favorites to succeed Mario Draghi at the ECB, Benoît Cœuré and Jens Weidmann, were excluded. So did the French Minister of Finance, Bruno Le Maire. On the other hand, there is talk of Olli Rehn, governor of the Central Bank of Finland, the former finance minister of the Netherlands and former head of the Eurogroup, Jeroen Dijsselbloem, who inspires many misgivings in the periphery, or of Centeno himself. Also Mark Carney, current governor of the Bank of England. Although he was born in Canada, he also has Irish and British passports. In the last week, the name of Calviño has been gaining more strength.