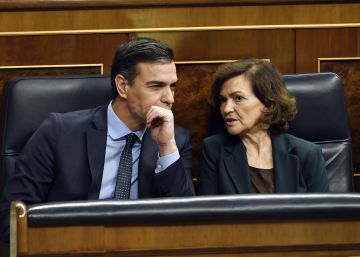 Spain will maintain its commitment to approve a tax on certain digital services as soon as a government is formally constituted, according to the sources of the Executive, despite the US threat to France for a similar tribute. From the Ministry of Finance remember that the decision will correspond to the next Executive. However, the measure appears in the electoral program of the PSOE for the elections of the past 10-N. The acting finance minister, María Jesús Montero, has repeatedly defended the need to create a tax with these characteristics to tax activities that are currently not taxed and that help adapt the Spanish tax system to the new realities of the 21st century.

In fact, the previous Socialist Executive already contemplated a tax of these characteristics in the agreement with Podemos of October 2018 for the 2019 Budgets. The council of ministers of the previous Sánchez Government came to approve a decree with the tax on certain digital services , as he baptized the Google rate, with which he intended to raise about 850 million. He sent it to Congress for processing, but declined after the dissolution of the Cortes by the electoral call.

Sources close to the acting Minister of Finance remember that the Spanish tax does not discriminate against companies depending on the country of origin. And they argue that the ideal would be that it will be jointly approved within the scope of the European Union or the OECD. But there are no forecasts of that happening until the end of 2020 as soon as possible. Therefore, some countries such as France have made progress in their own regulations, which has led to a response from Washington. Following threats of tariffs of up to 100% on French products announced by US President Donald Trump on Monday, the European Union closed ranks a day later announcing that it would respond "united" to such a measure.

The tax designed by Spain had a tax rate of 3%, which would be applied to certain digital services that have a worldwide turnover of more than 750 million and whose income in Spain is greater than three million euros. The decree defined three taxable events in which user participation is decisive for the creation of value: advertising aimed at users of a digital interface (website, technology platform, software, or social network); the provision of platforms that allow users to locate other users to trade with them (the paradigmatic case is Amazon) and, finally, the sale or transfer of data collected from users of a website or platform.

"It is not admissible that in the 21st century there is no country, state or political force that, through threat or coercion, raises its disagreement or refusal to start a 21st century taxation," Montero said in July. “Ideally, an agreement will be reached at the global level or, failing that, at the European level, but if an agreement is not reached in these two areas we will have to act at the national level. The Government does not rule out acting and addressing the implementation of that rate, ”said the acting Minister of Economy, Nadia Calviño, this summer.