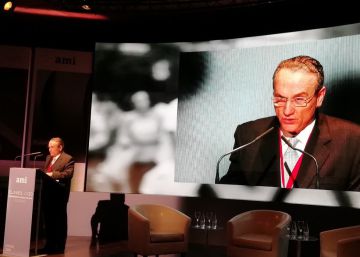 Press readers are increasingly digital. Spain will end the year with 17.5 million daily readers, but while the digital format grows by 12%, the paper falls by 9%, according to estimates from the Association of Printed Media (AMI), presented Tuesday in the framework of the days 2020 keys, organized in collaboration with WAN IFRA, the World Association of Newspapers and News Publishers. Together, the more than 80 media grouped in AMI total 403 million unique monthly users of multiplatform press, which represents a growth of almost 50% in the last three years.

Both readers who only read digital press and those who combine the format on-line and the paper is already two out of three in Spain. The print media are losing weight among the public although 1.5 million copies come out of the press every day. And they are also having less relevance in the advertising market. Of the 828 million that will be collected this year, 56.8% of the investment will go to paper support and 43% to digital.

"The current model does not guarantee our profitability, so we put on the table the subject of paid content subscriptions on-line. And we have to do it adding value to the reader and with an attractive informative offer. We must know the reader better and anticipate their demands for information to offer them a valuable experience, "said AMI President Javier Moll.

Searching for sources of financing outside of advertising is the great media challenge. In recent years the cost of the advertising impact has plummeted; new media were born, such as influencers, increasingly claimed by brands; New players have arrived, such as television platforms, and some brands have created their own advertising media. These factors are driving, as explained by Enrique Yarza, president of Media Hotline, a strengthening of other instruments, such as the branded content, social networks, programmatic purchase or video.

The business model also involves the collection of content. Newspapers capitalize on their main asset: credibility. In France, a dozen groups – including Lagardère, Radio France and Le figaro– have formed an alliance to create a common registry. The reader only has to identify himself once to be able to access all the websites. And you can do it by providing an email. "Thus, each editor can begin to work with the data of the readers. It is a much more reliable system than that of the cookies to define and identify the public, "according to Bertrand Gié, news area manager of Figaro

But paid content in the digital field may not be enough to make the journalism business profitable. Columbia University Professor Raju Narisetti has warned that "having advertising and subscribers will not solve the problems facing the industry." He remembered that The New York Times, the most successful example when it comes to attracting subscribers, subscribers account for less than 4% of the people who visit the US header in its version on-line after eight years

During the presentation moderated by Noemí Ramírez, head of clients and product development at PRISA News, Narisetti has insisted that companies can generate income in many ways so that they are sustainable from an economic point of view. You have detected at least 25 different ways of obtaining resources. The classics are native advertising (created exclusively for the web), video and digital subscriptions. But there are others that are not yet sufficiently exploited. Narisetti highlights the organization of events or give a new life to the archives. And he gives the example of the series about El Chapo created by Netflix and based on information from Univision journalists. "It's a very interesting opportunity. Netflix, Disney or Apple are willing to invest a lot of money to buy content from the world of journalism." Knowing that in no other industry like the news industry is the material new every day, it advises "a certain understanding" towards the Hollywood way of working.

The Generalitat orders the confinement of the Segrià region, in Lleida, due to the increase in infections