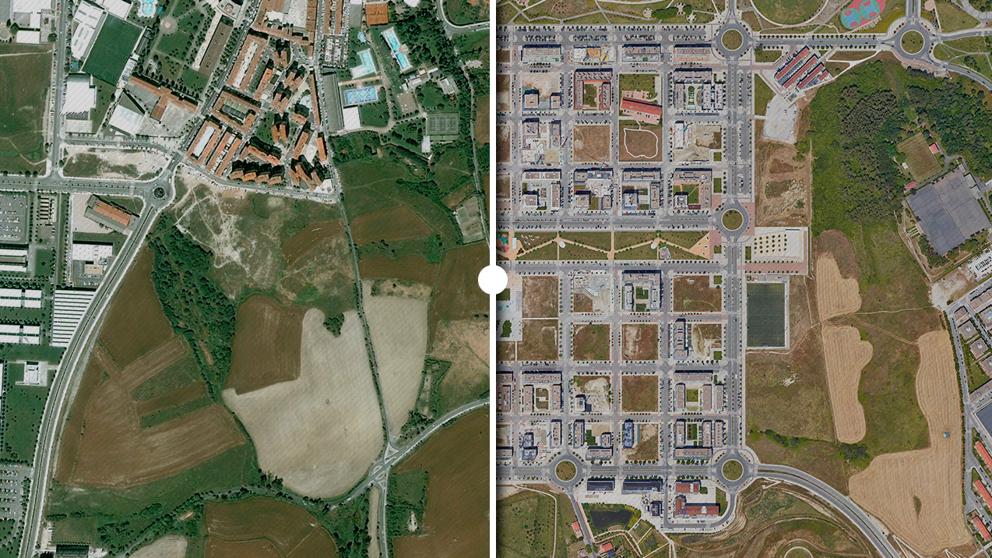 Lifeless landscapes. Streets without people or buildings. Asphalts without cars. Homes – when they exist – that were never occupied. Or projects that collect dust in drawers. Even more amid the pandemic of coronavirus. So, it is to look back, and ask yourself: what did we learn with the last crisis? The real estate boom came followed by crack of the economy. It is only in recent years that Spain it has grown in GDP, it has reduced unemployment, until construction came back. Its evolution after the outbreak of the global epidemic is more than uncertain. But it is to open Google Earth and see that the old brick still stands. And that has never come to a complete stop.

The colective Rotunda NationFor example, it has been documenting it for years through aerial images of a country that ghost roundabouts. Day to day. Every year. There are already more than a thousand. Until creating a mosaic in which there are only streets and pavement accompanied – more often than not – by roundabouts with no exit.

Because the puncture sank the real estate business overnight. In a hasty way. In an unexpected way for most. With serious consequences for many. Between company closings, unemployment, migration in search of opportunities, evictions that follow. Today you can still see abandoned urbanizations and pharaonic works in the middle of moors where nobody lived. Like Seseña, in Toledo. Or Valdecañas, in Cáceres. Some sentenced to demolition. Others, between golf courses without using or watering. Even in protected areas.

A stage – if one follows the geographer Oriol Nel • lo of the Universitat Autònoma de Barcleona -, which worries about its scale. Every ten days between 2000 and 2005, an area equivalent to Barcelona’s Eixample was developed. A total of 36.5 Eixamples each year. Between 1996 and 2006, an artificial urban surface equivalent to a third of everything built throughout history was built. A “territorial excess”, as summarized by Pedro Górgolas, doctor architect and associate professor in urban planning and territorial planning at the University of Seville, which gave rise to the “unborn periphery”, to those “unfinished territories suddenly suspended after the collapse of the real estate sector ”. To roundabout nation.

Although this is also an old acquaintance.

The road to the prick nightmare

The last real estate bubble “is not an isolated event in the recent history of Spain”, Górgolas himself tells us. And he continues: “In the last fifty years, economic growth has been supported by three real estate booms: the late Francoist, from 1963 to 1973; the neodemocratic one, from 1985 to 1992; and the one linked to the change of millennium, from 1997 to 2007. This indicates the clear dependence of this sector ”.

The question, therefore, is an obligatory one: are we witnessing the end of this speculative tradition or are we already beginning to write a new chapter in an endless story?

That crisis left us a half-built hotel in Murcia on whose roof it was read (in German and in capital letters, as the photographer Rafael Trapiello, a road engineer and one of the founders of Rotunda Nation) “The years of fat cows are over.” It was the memory of the ecstasy of previous spending and the depression of subsequent austerity. A memory of the past and a warning for the future.

And it is that, when we had not yet solved the previous crisis, filling the previous gaps on the territory, healing the wounds on the ground, the numbers suggest that we are reliving an old dream again. On another scale. In other time. With permission from Covid-19.

Because as it indicates to The vanguard the Association of Building Promoters of Spain (APCEspaña), the construction returns. Little by little. Without personal brand as in the past (“the sector is still highly atomized, but less than in the stage prior to 2007,” they assure). But, at least until last month, it consolidated. Despite the fact that the public Sareb (the Asset Management Company from the Bank Restructuring) still has thousands of floors inherited from the toxic assets of the banks. And even if they continue, even today, whether in the Sareb or outside it, without selling a large part of the empty flats that populate the country.

Professor of Economics at the Universitat Pompeu Fabra and specialist in the sector, José G. Montalvo, in fact, points out that “with a construction level of less than 10% of what was built during the bubble, it is difficult to speak of a new housing boom. Sales, especially dominated by the second hand, are only slightly more than 50% of the time of the bubble. If by ‘boom’ is meant price increase, there has been a clear recovery since 2014. But prices are still more than 20% below the maximum, and in recent months they have been slowing down to the point of starting to fall in the areas where they climbed the fastest. For example, in Barcelona and Madrid ”.

It is also the APCEspaña who points out that “there is no construction boom. We have five years with positive data regarding the activity, but with respect to starting figures for 2014, for new home visas, which were 34,000 for the whole of Spain. However, they are still very reasonable levels of activity that are even below the need for new housing that exists in Spain if we take into account the creation of new homes per year according to the INE. Specifically, in Spain 106,242 new homes have been approved (start of construction) in 2019. The creation of homes stands at 122,000 ”.

And it is precisely in his explanation where a criticism shared by several of the experts in urban planning resides. Among those who recall the roundabout nation and the brick. So much so as to put the renewed urban expansion projects at the epicenter of a new doubt: perhaps, as the economist John Kenneth Galbraith already said, the memory of the markets is brief? Perhaps, as other specialists summarize, we live in the disaster myopia and the further we move away from it, the more we tend to repeat it?

The cases that follow and those that will come

José Luis Miralles, engineer and professor of urban planning at the Polytechnic University of Valencia, for example, highlights The vanguard what he considers a fundamental problem: “It affects the fact that it is still cheaper today to urbanize rural land than not to organize and / or rehabilitate urbanized land, improve and renew the existing consolidated city. In other words, the pricing policy of what can be built also comes into play, ”he points out. And he continues: “There has always been a housing deficit for those who have not been able to afford it. Still existing. Although there are houses. “

In fact, the data speaks in the same direction. All of Spain was affected by the property fever in its most recent past. Although especially the large Spanish urban agglomerations, with Madrid and Barcelona at the top, followed by the islands and the Mediterranean coast. It is where the trace of the half-left is best seen. Today construction returns to these places. Although at other levels. In a more modest way. But it returns, as the photographs included in this report illustrate, with well-known lines even over previously unexplored territories.

“The recovery initially focused on Barcelona, ​​Madrid, parts of Malaga, the Balearic Islands and the Canary Islands. Then it expanded in an oil slick to the metropolitan areas of Barcelona and Madrid and to other large cities, such as Valencia or Zaragoza, which took over. But right now the cycle is changing and those places where prices started to rise first are slowing down very fast, while others have momentarily taken over. Many cities have not recovered anything from house prices since 2014 or are still showing price drops ”, Montalvo details.

Precisely, the economist Julio Rodríguez, former president of the Mortgage Bank of Spain, warned in the Congress of Deputies, in 2017, during the commission of inquiry into the financial crisis, of the risk of a (new) bubble in the real estate sector, if well “those who are currently contributing more money in Spain, are not the banks but the investment funds. It is foreign funds that are buying land, and even building as developers. ”

Thus, he warned of new projects that resemble old ones, from north to south and from east to west. Or as Trapiello, in turn, points out. Rotunda Nation, from “[imágenes aéreas que] they continue to transmit the absurd in Spain. Not only for the before and after, but for urban solutions that seem very surreal to me. We are concerned with territorial identities, but we make cities without identity, where the photo is always the same, now with fewer gaps. ”

There are thousands of cases for 8,000 total municipalities in Spain. Thousands of drawings in the planes in which you can guess routes that no one steps on and that still less are lived; ways that there are even those who doubt whether someone will end up making them their own. In a representation, “comical” for some and “tragic” for others, which – as attributed to Mark Twain – comes to extol that “history does not repeat itself, but often rhymes.”